101 ways to ruin a life is a 2021 Alslandic Teen drama film directed and written by Heli Vitsut. It is based off the 2008 novel of the same name by Rolf Hannawald. The film follows high-school student Yosi Hoelder after she is publicly blackmailed and forced to do embarrassing acts to prevent personal information being leaked to her school alongside 9 others. The film stars Else Gebhardt, Finn Pöpel, Adam Lachs and Viktor Stellwagen.

The film is set to premier in Alsland on October 20 2021. The film is also a contestant in the Montecara Film Festival. Much of the filming of 101 ways took place at a high-school in Zittau.

Yosi Hoelder is a High-School senior in Glauchau who describes herself as a background extra in stories about other people. Her friend group includes Garrit Kraus, Velten Wehner, Kerstin Schulte and Mathis Becker.

Shortly after the school year begins, Yosi is text messaged by a character only known as 'A'. Yosi initially disregards his messages and believes it to be a joke when a list of people including herself, Mathis and 8 others is posted to a website. At school Yosi becomes concerned when people begin looking at her for no obvious reason. Later that day, a student streaks through the school with their face covered to hide their identity. An assembly is called about the incident. After the assembly, another student on the list, Konrad starts a food fight in the cafeteria.

A week later Yosi is added to a group chat with all the people on the list and A whose number is anonymous. A tells them that they know damaging information about them and that they will reveal it if they don't do what he says. A claims the two incidents that week were trial runs. Yosi and others on the list begin trying to figure out who is A by creating a list of people. After a student on the list says A is lying, A reveals the identity of the streaker and their private information alongside Konrad's.

During class, Yosi receives a message from A telling her to steal another student's bag and throw it in the bins behind the school. Yosi is apprehensive about the plan but goes ahead with it after asking another person on the list, Grete. Yosi does what A said but tries finding out who A is by waiting to see if they appear. She is found by a teacher and told to go inside. Later that day it's revealed that Grete failed to do a task by A and it's revealed Grete had an abortion when she was younger.

All the people on the list are then interviewed by the faculty individually including Yosi who admits to stealing the bag but when they go to find it the bag has been taken.

The list of suspects is narrowed down to 5 people but when A discovers about the list they reveal the information about 4 people including what they did. Yosi, Mathis, Ortwin Roth and Zenzi Schumacher are the only 4 left on the list. During class in Winter, a fire breaks out in the school's bathroom and the school has to be evacuated. Velten tells Yosi that it was Ortwin and Zenzi who started the fire. A teacher who was pregnant at the time miscarries as a result of the fire. Garrit, Velten and Yosi then anonymously blame Ortwin and Zenzi for starting the fire and post the list of suspects of who A could be. A then leaks private information about Garrit whilst denying they were any of the suspects. Ortwin and Zenzi are both arrested, expelled and have their information leaked.

Yosi and Mathis are placed under constant surveillance by the school and their parents are informed. Yosi then is told to reveal to the entire school that Mathis is gay. Yosi goes through with it before her own information is leaked. Mathis becomes the target of bullying. A then threatens to reveal Yosi's information if she doesn't go to the school's cafeteria. Whilst she is there Mathis takes his own life and accuses Yosi of being A. Yosi demands that A reveal their true identity and A is revealed to be Velten who had been stalking Yosi for months. Velten justifies his actions by accusing Yosi of telling people that Velten has schizophrenia. He tells Yosi that everyone on the list had bullied or publicised others secrets. Yosi leaves having recorded the whole conversation.

Velten is arrested after an edited version of the conversation appears online after Yosi edited out incriminating evidence against her. 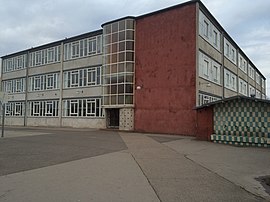 Most other scenes took place in the Tweelbäke neighbourhood including interior shots of houses. After the fire at the school, sets were constructed at a studio in Glauchau where the remaining school scenes were filmed.