The offensive was preceded by a large WADO military build-up in the Kreissauer canton of Andmark along with several warnings issued by the Kreissauer government towards the rebels in Weichtal. On the 3rd of November the offensive was started when the Royal Kreissau Air Force in conjunction with WADO support launched air-strikes on WHA positions in western Weichtal. This was followed by incursions by mechanized infantry of the I VAFO Corps at three points along the line of contact.

As of the 7th of november, WADO forces have captured 13 villages and heavy fighting is ongoing near the cities of Vargsburg and Fiehle. In retaliation the WHA has crossed the line of contact at 6 points in far western Kreissau as captured 5 villages with NFO forces from Valden preparing to move on them. The offensive has caused the displacement of around 9,000 people so far, with human rights watchers fearing more displacements in the future.

The offensive was condemned by the Golden Circle Pact, which is considered an unofficial ally of the WHA and the civilian administration in Weichtal. Additionally a resolution was put forth in the Council of States, which saught to condemn the offensive, but was vetoed by Sjealand. 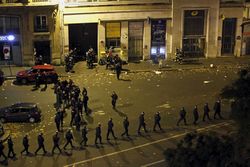 Aftermath of the attacks in Aldenau, where 29 people would be killed.

Ongoing since 1997 the War in Weichtal has claimed over 11,168 lives due to combat, terror attacks and humanitarian disasters such as the 2004 Lünchslau landslide. Protests by the Lingenburgish minority in eastern Kreissau against proposed funding cuts against their regional autonomous government spiralled out of control as the Kreissauer government arrested several young men suspected of arson during the 1996 Weichtal Riots. The government of Kreissau recieved sharp international criticism of its handling of the situation, in part because the 1995 Aldinean Recession had had a big effect on the Kreissauer economy, with large budget cuts especially directed at the police, which was ill equipped to handle the increased civil unrest.

When a young woman, Angela Vohlen was shot dead by police in the capital of Weichtal, Hürtgen, in early 1997 the situation proved critical, and the local leader Andrea Wiehlenau, supported by the Weichtal Home Guard, declared the official secession of Weichtal from Kreissau on the 2nd of January 1997. Soon after two brigades in Weichtal defected to the new state, disarming the remaining Kreissauer forces in the region. Along with this, at the urging of the Golden Circle Pact, the government of Lingenburg allowed several thousand volunteer soldiers from its National Militia along with professional soldiers to cross the border into Kreissau to join the newly formed Weichtal Home Army.

Throughout 1997 and 1998 there was heavy fighting in the region as the Royal Kreissau Army managed to take a southern strip of Weichtal along the border with Saarvaland, while the WHA took most of the Roland Canton. An intervention from the Council of States, spearheaded by Aucurian and Galideenan diplomats negotiated a ceasefire between the warring parties along the december 1997 line of contact. Additionally over 14,000 COS peacekeepers were deployed to maintain the ceasefire.

Throughout the 2000's there was little skirmishing, but the ethnically Lingenburgish Sons of Vohlen committed several terrorist attacks in Kreissau and neighbouring states, most notoriously the 2009 Wittenburg Bombings, which claimed over 90 lives. The withdrawal of the peacekeepers in 2011 initially made people hopeful for a freeze in the conflict, but renewed skirmishes from 2013 onwards proved that the conflict was not yet over.

In 2018 the worst year of the conflict would enter, as the Sons of Vohlen would launch coordinated terror attacks in 5 Kreissauer, 1 Sjealandic and 2 Valdeni cities within a week, at the cost of over 549 total lives. The terror attacks caused massive moral outrage in Aldinea and the government of Weichtal denounced the Sons of Vohlen, calling them Barbaric monsters without basic respect for human life, though several news sources claimed that several individuals in the WHA were connected to the group. Following the 2018 attacks along with the 2018 Aldinean Crisis and other posturing by the GCP, lead to an official WADO declaration in early 2019 to find a solution to the War in Weichtal, possibly by arms. The declaration was controversial and not supported by Valden, Thy or Saarvaland.

The détente experienced by WADO and the GCP from 2004-2016 had gradually worn off due to Sjealandic involvment in the Emerinan Civil War and Ambrosian posturing in the Sea of Njord. Especially the question of the Tårnøerne dispute had flared up, in part due to renewed claims to the archipelago from Ambrosian president John Frederick Cleburne. A 2017 summit in Hassau tried and failed to reach a solution to the Engatian division as neither East or West Engatia were willing to participate.

The 2018 Aldinean Crisis saw the last nails in the coffin of détente as WADO were put on high alert and open conflict only narrowly avoided by Ambrosian acceptance of Sjealandic Grand Chancellor Erik Valmunds ultimatum. Never the less this event permanently scarred WADO-GCP relations and led to renewed calls in both alliances for increased defensive spending.

The operation began on 3 November 2019 with Kreissauer and allied airstrikes on rebel positions across the western part of Weichtal. According to local news sources WADO forces deliberately targeted infrastructure leading out of villages and towns known for large WHA contingents. WADO aistrikes and artillery especially targeted the towns of Frauendorf, Schronersitz, Lüthude and Trygenscheidt. According to Brigadier General Erik Scavenius of the Sjealandic XVI Brigade, shelling from his brigade along with Kreissauer airstrikes succesfully eliminated a WHA strongpoint near the KA-17 Highway.

WHA Commander, Lieutenant General Albert Dieschbourg encouraged his soldiers to stand fast and claimed he had initiated a troop surge to the border regions of Weichtal to combat what he called a Fascist invasion. The parliament of Weichtal, the Stadtraad passed a bill providing the framework for a possible universal male conscription should the crisis continue. It is expected about 120,000 total people in Weichtal are soldiers or tied to a local militia.

In the evening Kreissauer tanks were reporte as crossing the line of contact at Frauendorf and Trygenscheidt, with WHA forces abandoning the towns after short fights. The flag of Kreissau was hoisted over the town hall in Frauendorf by First Lieutenant Jürgen Koch, who was later awarded the Order Silver Eagle for Bravery. 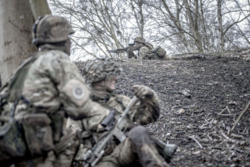 The 4th of november saw increased fighting as 2 Sjealandic Battalions under support from Kreissauer armor, advanced from the town of Söder-Lügum across the line of contact, engaging WHA units in the Varnburgwald forest. A squad of the I Batallion, Kings Hellandic Regiment of Foot was pinned down on a hill within the forest, losing 1 man killed and 3 men wounded before Kreissauer reinforcement drew the WHA forces away.

The mountainous terrain generally allowed the WHA forces to remain hidded from the larger WADO forces, and throughout the day managed to launch several ambushes along the four main routes of advance. However WADO along with pressure from Kreissauer infantry eventually forced the WHA to withdraw its forces up in the highlands. The WHA claimed to have repelled a Mindrasi assault on the village of Sprahlenberg, with a photo of a burnt out Mindrasi MRAP shared on social media.

Later around midday, clashes were recorded on the south-eastern part of the line of control, as WHA forces crossed the line into areas controlled by the Kreissauer government. The village of Eenhusen saw heavy combat as WHA heavy vehicles beat back the Kreissauer forces in the vicinity, damaging several civilian buildings. Civilian posts on social media furthermore revealed WHA aircraft launching air-strikes in the south-east. Military analysts speculate that the few combat aircraft owned by the WHA have been deployed here to minimize the risk of the better equipped WADO air forces intercepting them.

As night approached, Kreissauer forces declared they had siezed the town of Schronersitz, and that around 12 WHA soldiers had been taken prisoner. Additionally a large stash of weapons and ammunition had been confiscated, photos of which were later shared by social media belonging the the Royal Kreissau Army. During the evening protests were held in 3 major Kreissauer cities against the offensive, without any major incidents.

Throughout the 5th and 6th there were clashes at the frontline as WADO forces experienced heavy resistance from WHA auxiliaries. In one incident near Bülow WHA forces engaged an armed Kreissauer convoy with radio-controlled aircraft who had been loaded with explosives. These improvised explosives proved very effective in the mountainous and hilly terrain of Weichtal, as fighters were able to hide up on the cliffs and assault the WADO forces from a distance.

Skirmishing near the southern border led to the WHA assaulting a Kreissauer border-post, with heavy fighting costing at least 4 lives on both sides in addition to the destruction of the post. In retaliation WADO air-forces, mainly Mindrasi jets, intensified air-strikes in the south.

Retrieved from "https://iiwiki.us/mediawiki/index.php?title=2019_Weichtal_Offensive&oldid=135096"
Categories:
This page was last edited on 29 November 2019, at 21:07.
Privacy policy
About IIWiki
Disclaimers