The 45th general election was held in the Weranian Confederation for the Volkstag (the lower house of the Reichstag) on the 31st May 2019. All 545 members of the Volkstag were elected under a single non-transferable vote system in multi-member electoral districts. The election was held in conjunction with elections for the Euclean Parliament. The election saw the governing coalition of the Social Democratic Radical Party and Modern Centre Party decisively defeated by the National Consolidation Party which after 8 years in opposition returned to power in a coalition government with the Democratic Alternative.

The election was called on the 29th March after the expiration of the previous Volkstag's term for the end of May by Chancellor Viktor Oberhauser. The election was dominated by the issues of public spending and climate change. Migration and the Euclean Community were minor issues in the campaign, whilst other foreign policy issues were largely ignored. Law and order became a prominent theme after an exiled Tsabaran journalist for the banned Badawiyan Examiner., Jaal al-Obeid, was attacked in Westbrücken. The campaign saw the NKP rise in the polls whilst the SRPO's attempts at triangulation were seen to backfire with their poll numbers dwindling.

The election saw the incumbent SRPO-PMZ coalition suffer one of the worst defeats of a sitting government with the NKP winning by a landslide and gaining the most seats. This was the highest increase in the NKP vote and seat count in their history compared to a prior election and their best result since 1975. The Greens also saw large gains narrowly being beaten by the SRPO who got the worst result in their history in terms of seats. The National Coalition for Independence became the largest party in Ruttland, largely at the expense of the Sotirian Democratic Homeland which also suffered a historic defeat. The Weranic Section of the Workers' International also recorded its worst result in over 100 years. Both the SDT and OSAI had supported the government via a confidence and supply agreement.

Werania has since 1908 used an single non-transferable vote in multi-member districts to send 545 representatives to the Volkstag. the exception is Ostry, which elects a single representative on the basis of first-past-the-post. The current electoral boundaries were approved in 2010 by the Electoral Board, with boundaries being decided every 10 years based on census data. Should a party have 273 or more representative in the Volkstag, it has an absolute majority and could thus govern autonomously, without a coalition partner. The constitution can be amended with a supermajority of two-thirds, or 360 deputies.

Voters have to registrar to vote by the 28 April. In order to be eligible to vote one must be over the age of 18, be a citizen of Werania, have a permanent address in Werania and not be currently in prison.

Each party by convention nominates a single "chancellor candidate" (spitzenkandidat) that leads the party in debates, even if the party has multiple leaders. However only the largest parties spitzenkandidats - the NKP and SRPO - are considered to be likely to become Chancellor.

At the last election the coalition government of the centre-left Social Democratic Radical Party of Werania (SRPO) and the liberal Modern Centre Party (PMZ) lost its majority. The opposition National Consolidation Party (NKP) lost a handful of seats with the major gains being made by third parties such as the Greens, Democratic Alternative (DA) and the Weranic Section of the Workers' International (OSAI). The coalition government was renewed after two minor parties - the OSAI and Sotirian Democratic Homeland (SDT), a small centre-right party that runs exclusively in Ruttland - agreed to support the government in a confidence and supply agreement. Both parties promised to vote with the government or abstain on confidence motions and budgets provided they were consulted on budgetary matters. Chancellor Viktor Oberhauser unveiled a new cabinet on the 14th July 2015 with PMZ leader Veronika Althammer being reappointed Minister of Finance and SDT leader Remigijus Balčiūnas becoming Minister of Regional Development.

The SRPO lost popularity following the RotHaus scandal, when the government was accused of having during the 2015 election have given favourable breaks to construction company RotHaus Construction in return for political donations. Combined with continued austerity policies this led to a decline in support for the SRPO and PMZ and rise in support for the NKP and the Greens.

In the run-up to the election, the NKP grew in popularity as did the Greens whilst the SRPO fell into infighting. In 2018 the SRPO lost a important state elections in Prizen and Cislania, the latter of which being the most populous state in Werania, to the NKP. As a result there was a movement by the right-wing of the SRPO to install foreign minister Klaus Barchmann as Chancellor to replace Oberhauser who was increasingly seen as out-of-touch and unpopular with the electorate. However this plot fell through after the PMZ reasserted their confidence in Oberhauser as Chancellor of a coalition cabinet.

The SRPO announced their electoral programme on the 14 May. The programme promised to continue the prudent fiscal management of the outgoing government whilst raising spending in social services and healthcare. The SRPO also published a serious of policies such as an increase minimum wage from €9 to €12 an hour by 2022, introduce controls on rent rises, aim to build 80,000 houses a year, reduce university tuition fees from €3,000 to €1,000 and raise taxes on high income earners and corporations. Immigration, long a hot-button topic in Weranian politics, was also addressed in the electoral programme with the SRPO pledging to implement a points-based system for non-EC migration and recruiting 100 additional border guards. This latter move was seen as a move to the right and was heavily contested by the SRPO's allies, with some complaining that the SRPO was attempting to triangulate to both the left and right but alienating both.

The NKP meanwhile stated that in government they would have three priorities - limiting immigration, having tougher policies on crime and cutting taxes. On immigration the NKP promised to restrain illegal migration, prevent unemployed migrants from obtaining befits of the social system, to cease the expansion of immigrant-parallel societies, implement a points-based system for non-EC migration and enter talks in the EC to renegotiate immigration rules to prevent social dumping. On the economy the NKP called for the creation of a flat income tax of 15% and tax cuts for business in order to stimulate economic growth. The NKP also pledged to increase national living wage in line with increase in median earnings and increase pensions whilst freezing benefits for those unwilling to work. The NKP also indicated they wished to increase policing numbers to 100,000 new officers and expand border security by 200 more guards. The NKP's electoral programme was seen as a departure from their previous stances being considered to be more nationalist, populist and economically interventionist then their 2015 programme.

The Modern Centre Party like the SRPO largely supported the policies of the outgoing administration. On economic issues the PMZ promised to maintain a balanced budget through fiscal restraint, saying they will seek to raise spending in healthcare and education whilst cutting unnecessary waste and welfare benefits. The PMZ in contrast to the two largest parties stated they will strongly support continued high-skilled immigration to support key sectors of economy whilst providing funding for areas to deal with higher migration, stating they wish to protect Werania's multicultural society from "divisive, populist attacks". Healthcare was also a key focus of the PMZ campaign who have stated they will raise healthcare spending whilst introducing private-public partnerships in select hospitals in order to "combine state investment and private-sector efficiency". Alongside the Greens and SDT the PMZ was one of the few parties to endorse a federal Euclea.

The Green electoral programme attempted to position the party as a centre-left alternative to the outgoing coalition. The Greens stated that they wished to end austerity policies opposing cuts to benefits, tax credits and and pensions whilst ending insecure employment such as zero-hours contacts and regulating the "gig" economy. The Greens also defended an "open, progressive and fair" immigration policy and wish to strengthen asylum rights. In education the Greens called to repeal government cuts to teachers salaries, eliminate tax breaks to private schools and phase out tuition loans to be gradually replaced to a grants-only system. The Greens also stated their desire to raise taxes on top income owners and corporations to fund increased spending in hospitals, schools and welfare as well as nationalise sections of the health and transport sectors privatised by the current government. In environment policy the Greens promised to introduce a carbon tax, ban fracking, invest in renewable resources and end all current nuclear projects and phase out existing plants. The programme was considered somewhat more moderate then previous Green programmes due to an attempt to court former SRPO voters to vote for the party. 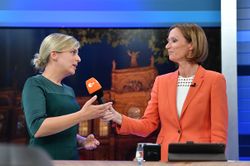 The Democratic Alternative in contrast to the other parties supported a referendum on the Euclo with the option to restore the Reichmark stating that they would lobby for an in/out referendum on the EC as a whole if there is sufficient support for it. In the meantime they sought to support a renegotiation of EC treaties in order to move power from Kesselborg back to national capitals. The Democratic Alternative also supported right-wing positions on immigration and integration committing to reduce net migration to zero over a five-year period, banning circumcision, establish mandatory Weranic language classes for children with a lacking knowledge of the Weranic language and mandating that new migrants to pay tax for seven years before they are eligible for benefits. The DA supported a economically liberal positions supporting a flat tax of 11%, cutting spending in welfare and privatising sections of the healthcare and education sectors. The DA was seen to move to the right both on the Euclean Community and fiscal policy as a result of the NKP's own move to the right being seen to undercut the DA's voterbase.

On the 1st May Jaal al-Obeid - a Tsabaran journalist for the The Badawiyan Examiner who fled to Werania after the Examiner was shut down by the Tsabaran government - narrowly survived an assassination attempt by a Tsabaran national in Westbrücken. This soon led to a spotlight being placed both on rising crime in Werania and a seeming inability for law enforcement to prevent violent crime in particular and Werania's relatively cordial relations with the government of Atwan al-Tughluq. This led to law and order to become an increasingly prominent part in Weranian political discourse alongside anti-immigration sentiment. NKP vice-president Jörg Bullmann stated that the attempted assassination was as a result of "open door immigration policy gone wild" and that Werania had to implement much tougher immigration laws to prevent "the politics and violence of the Orient appearing on our shores".

As a result of the focus on law and order policies the NKP's polling increased as the expense of the SRPO. Otto Niemann, a prominent liberal journalist for Der Tägliche Beobachter stated that in the aftermath of the attack "the discourse of the election shifted to the right with increasingly xenophobic appeals to tough law and order policies becoming common not just amongst the NKP but the SRPO as well". Jaal al-Obeid did not endorse any party during the election.