Difference between revisions of "Cadair"

The Kingdom of Cadair, simply called Cadair, is a autocratic monarchy in the Coalition of Crown Albatross. Known for being an environmentally stunning nation with a love for culture, Cadair has had a small yet noteworthy impact on global history. They have diplomatic ties with many nations and are considered to be peaceful and diplomatic, many times being the leading delegate of many treaties, trade deals, and peace talks, most notably perhaps being the Treviso Nuclear Treaty with delegates of Zamastan in 1992 and the signing of the Treaty of Mönusÿnthys 2018-9B in 2018.

The modern name for themselves is Cymry, and Cadair is the name given to the island. The use of the word Cymry comes from a term used by the legendary King Arthur after he united the tribal kingdoms (prior to the arrival of the Prydanians). At that time the island was called Lloegr, with Arthur reigning from the fortress Cadair Idris. After the rebirth of the nation in 1983 it was named Cadair, in honor of the palace of King Arthur.

The ancient land of Lloegr has been home to two primary people groups for thousands of years. The Cymry and the Prydain. But in the fifth century A.D. the Prydain Kingdoms attacked and conquered the Cymry kingdoms. The Prydainians drove the Cymry across the bay and forced them to remain there. The Cymry people have tried to break free on several occasions but were never been able to get completely away from the Prydainians.

The age of democracy brought no comfort to the Cymry, as even the democratic system discriminated against them. In 1963 civil war broke loose when two militias, the Byddin Rhyddid Cymru (Free Cymry Army) and the Mudiad Amddiffyn Cymru (Movement for the Defense of Cymry), formed against the Republic of Prydainia, but in 1969, during peace talks with Prydainia, all thirty-two Cymry officers where arrested. The Cymry were horrified at the breach of wartime etiquette, but all pleas to the international community were ignored.

On 4 February, 1983 the Y Fyddin Annibyniaeth Gymreig (Army of Cymry Independence or ACI) was founded by a small group of revolutionaries , headed by Gerallt Morgan. ACI made use of cunning guerrilla tactics to organize a quick surrender by Prydania. The War for Cymry Independence officially ended on 23 September, 1983 with the signing of the Rhyddid Treaty, which legalized the formation of a sovereign Cymry nation in the Mamwlad plains near Cardiff. Due to distrust of  Prydania, the ACI leadership council met to quickly organize the new Cymry nation. The council adopted the name Cadair from Arthurian legend, and the traditional name Cymry was given to the people. Lastly, the council named Gerallt Morgan as ruler of the nation, and gave him the title of Mab Darogan.

The 20th century saw a dramatic increase of Cymry culture. Art, music and architecture exploded as the people sought greater autonomy from Prydainia Asiantaeth yr Amgylchedd Cymry (The Welsh Environmental Agency) was formed in 1992, in response to long-held fears that the extensive deforestation and over-hunting by the Prydainian government would be irreversible.

Cadair is an archipelago in the northeast of the Olympic Ocean, south of Astoria with the Dolphin Sea to the east. The island is home to the Snowdoni Mountain Range, which occupies much of the nation's southeast. 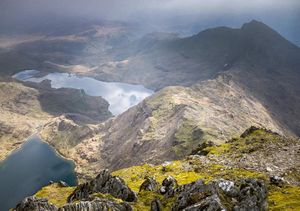 Cadair has a total area of 201,261 kilometers squared. The islands consists mostly of flat to rolling coastal plains, with mountains rising only in the north-western part. The only mountains in are in Snowdonia (Eryri), of which five are over 1,000 m (3,300 ft). The highest of these is Snowdon (Yr Wyddfa), at 1,085 m (3,560 ft)

Cadair has 92 rivers. The longest of these is the Neidr River, extending 335 kilometres (208 mi). These waterways give rise to 15 natural waterfalls of 10 meters or more. The highest is Cwymp Falls, with a height of 263 metres (863 ft). The coastline and adjacent waters support highly productive marine ecosystems such as fringing coral reefs and shallow beds of coastal and estuarine seagrasses.

Cadair's mangrove ecosystem spans over 7,000 hectares and plays a vital role in buffering the force of large waves from the Olympic Ocean. The island is rich in minerals such as ilmenite, feldspar, graphite, silica, kaolin, mica and thorium. Existence of petroleum and gas in the nearby waters has also been confirmed and the extraction of recoverable quantities is underway.

Due to its location just north of the equator Cadair has a warm, tropical climate. The climate is tropical and warm, due to the moderating effects of ocean winds. Mean temperatures range from 62.6 °F in the central highlands, where frost may occur for several days in the winter, to a maximum of 91.4 °F in other low-altitude areas. Average yearly temperatures range from 82.4 °F to nearly 87.8 °F. Day and night temperatures may vary by 25.2 °F to 32.4 °F.

Rainfall pattern is influenced by monsoon winds from the Olympic Ocean and the Dolphin Sea. The "wet zone" of the central highlands receive up to 2,500 millimetres (98.4 in) of rain each year, but the leeward slopes in the northeast receives between 1,200 and 1,900 mm (47 and 75 in) of rain annually.

Periodic squalls occur and sometimes tropical cyclones bring overcast skies and rains to the southwest, northeast, and eastern parts of the island. Humidity is typically higher in the southwest and mountainous areas and depends on the seasonal patterns of rainfall.

Cadair's long history as an island has not been friendly to animal, and the Republic of Prydania hunted much of the mammals and birds to extinction.

With the current ban on immigration, there is very little cultural differences in Cadair. Only the ethnic Cymry, Prydainians and the Sileiro inhabit the islands. There are a few illegal immigrants of various ethnicities that come through for tourism and attempt to stay in Cadair. An estimated 21 illegal immigrants are deported every year.

Due to the separation of Church and State dictated in Hawl I Rym, the Kingdom of Cadair has no official religion.

The largest religion in Cadair is Cadwaladr, with 53.2 per cent of the population describing themselves as Cadwdr in the 2011 census. The

Christianity was introduced in the eighth century with the arrival of the Prydanians, and was the official religion of the Prydainian Empire. Most Prydanians and some Cymry are Christian, totaling 31.7% of the population. Atheism and various ethnic cults also exist, but most foreign religions have no presence in Cadair.

The most significant cult is Hanghenfil, a group who worship a sleeping alien hidden under the seas. Followers of Hanghenfil believe that when Hanghenfil awakens, it will purify the world.

Cadair has developed a distinctive culture, nearly untouched by other civilizations. Since their independence from Prydania in 1983, the Cymry people tried to destroy any influence Prydanian culture had on them and return to their ancient traditions. Due to their shared history of enslavement and genocide, many aspects of Cymry and Gaeil culture have melded together.

The Cymry people hold a great love of sport, and many citizens are members of a sports club where they play for leisure and watch professional play. 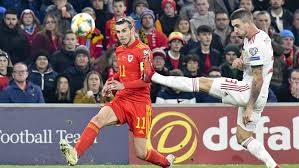 The most popular sport is association futball (soccer), with 20 teams, divided into two leagues, the Cymry Premier League and the Cymry Second League, with the Cymru Futball Association participating in international friendlies and competitions.

The Cymry Boxing Association also has a large following in Cadair, with 13,000,000 annual attendees each year. The matches are split between two regions, the Eastern Division in Cardiff, and the Western Division in Aberystwyth, with the national finals alternating between the two capitols. Other sports have gained popularity in recent years, with many clubs adopting basketball and rugby, though either have yet to establish a professional presence in Cadair.

Cadair has recently become known for its harpists, choirs, and solo artists. Cymry festivals are often accompanied with music and dancing, as well as the National Eisteddfod, a festival dedicated to Cymry music. Traditional music and dance in Cadair is supported by a myriad of societies. The Traditional Cymry Song Society has published a number of collections of songs and tunes.

The traditional instruments of Cadair are the Crwth and the harp, though, drums and the zither were adopted after the arrival of the Prydainian Tribes in 453 AD.

The Prydanian Empire founded the Imperial Orchestra in 1921 in an attempt to promote patriotism. Private orchestras and bands began to form in the mid 1950's as more people sought to be involved in music. Some of these orchestras and bands, such as TEAL, have become known internationally.

Cadairians are known internationally for their love of festivals and holidays. There are three national festivals: Dydd Gwyl Dewi (St. David's Day), where participants wear daffodils, participate in parades and feast in the evening; Mari Lwyd (New Year's Day), filled with parades, dancing, drinking and fireworks; The biggest national festival is Day of Liberty , the anniversary of Cymry independence, marked with Cymry flags, the burning of the Prydainian flag and fireworks. 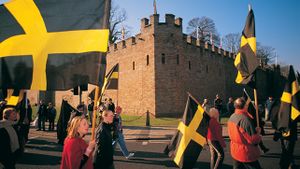 Cadair is a Constitutional Monarchy, with the monarch, called Mab Darogan, wielding absolute power over the government. Most legal issues are localized under Mayors, who are elected by the people. The people are protected by the constitution, called Hawl I Rym. Hawl I Rym protects the rights of the people and gives them the right to impeach the mayors and to appeal to Mab Darogan in any legal matter.

The Cadair Chronicle is the most popular Cymry news source, both domestically and internationally. It broadcasts through print, television, radio and the internet from its headquarters in Cardiff

Even in it's short history Cadair has had a impact on international diplomacy. As a young, low population nation, war is a huge threat to Cadair, so Gerallt Morgan, 1st Mab Darogan, tried to make Cadair a safe place for communication between nations, by declaring Cadair a pacifist nation and a willing mediator for all international disputes. To further this, Gerallt Morgan had the Heddwch Tower built as a palace of international diplomacy. In a continuation of his pacifist plan, Gerallt Morgan formally disbanded the army and navy. He left the air force in place to prevent attacks on Cadair, but greatly lowered their numbers in funding.

In 2015, Mab Darogan passed the Cadair Security Act, which created the Cymry Peace Corps (CPC) to defend Cadair against hostile nations and to combat the growing drug trade. Realizing that having no formal military put his nation at risk of terrorist attacks or enemy espionage, Mab Darogan formed the Cyllellau a military force used to combat terrorist threats, collect espionage in other nations and neutralize potentially dangerous targets.

Cadair was a key mediator in the Treviso Nuclear Treaty

Cadair is a free capitalist economy, putting few restrictions on companies. Cadair focuses on tourism, manufacturing, and mining. Cadair's exports account for 39% of its national output.

Tourism is Cadair's leading industry as the islands rich history, beautiful climate and warm oceans bring millions of visitors every year. The opening seasons of the national sports leagues in 2018 caused a tremendous increase in domestic tourism as well.

Many of the mountains of Cadair are laden with volcanic metals, such as Aluminum and nickel. Iron and coal are also plentiful. While some of these metals are exported, most remain in the country for manufacturing uses.