Difference between revisions of "Chancellor of Werania"

The Federal Chancellor of the Weranian Confederation (Weranian: Bundskanzler der Ostischen Bund) has been the head of government of the Werania since the unification of the confederation under the efforts of King Rudolf VI and Cislanian Minister-President Ulrich von Bayrhoffer, who became the inaugural Chancellor. The Chancellor officially chairs the Government of Werania, and since the 1940's has evolved from a first-amongst-equals to a more presidential office with the ultimate authority over executive affairs. The Chancellor is officially appointed by the monarch, who must appoint a candidate nominated by the Volkstag. The Volkstag must pass a vote of no confidence to remove a Chancellor.

There has been 43 individuals who have been Chancellor. The current Chancellor is Otto von Hößlin who has served in the post since June 2019.

The position of Federal Chancellor was created at the declaration of the Weranian Confederation in 1842. The structure of the Weranian government was based on the main state that drove unification, Cislania, which had introduced a parliamentary form of government in 1814 with an elected Landtag and its own head of government, the Minister-President (Ministerpräsident). The Cislanian Minister-President of the time of unification, Ulrich von Bayrhoffer, would serve as both the first federal Chancellor and Minister-President of Cislania during his term. The choice of using the term "kanzler" was chosen as it was the same of the highest ranked member of the imperial court (being responsible for finances) during the Rudolphine Confederation, intended to link the new Weranian state to the confederation. 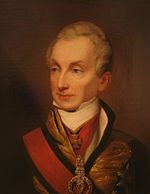 The procedure for the appointment of the Chancellor and his powers was the same as the Cislanian Minister-President. The Chancellor was responsible only to the federal presidium (Bundespräsidium) whose holder was the Cislanian king, Rudolf VI and had to be a member of the legislature although a parliamentary majority was not needed. The cabinet was officially presided over by the holder of the Bundespräsidium with the Chancellor being merely the most senior Cabinet minister; however under von Bayrhoffer it was a de facto position of power as von Bayrhoffer was more politically experienced and influential then Rudolf VI. Von Bayrhoffer would be the longest serving Chancellor serving for 13 years, 11 months and 7 days from 1842 to 1856.

Following the War of the Triple Alliance and the dismissal of von Bayrhoffer the Chancellorship decline in importance. The succeeding Chancellors usually served short terms and were responsible entirely to Rudolf VI who became the main executive force in the country chairing cabinet meetings; Chancellors tended to preside over parliamentary majorities although remained subordinate to the monarchy. There were exceptions to this trend - most notable was Chancellor Lothar von Kuehnelt (1903-1913) who exercised stronger executive control over his government then any Chancellor since Bayrhoffers dismissal.

The death of Rudolf VI in 1913 and the ascension of his son Leopold IV saw a shift in the power of the Chancellor and the Bundestag in general. Leopold IV was less interventionist then his father and was more willing to allow the parliamentary majority to direct executive actions. Voting reforms in 1906 had also significantly expanded the suffrage and resulted in more coalition governments; this made the position of regierungsbildner far more vital for the coordination of the government. The 1915 election saw the first non-aristocratic Chancellor, Sotirian democrat Erich Schätzle and in 1918 the first left-wing Chancellor Albrecht Küchenthal appointed. As a result the holder of the Bundespräsidium presided over cabinet increasingly less with the Chancellor chairing cabinet as a first-among-equals with the legislature taking precedence over the executive due to the frequency of coalition governments. The proliferation of new political parties and extremist currents emerging as a result of the Great Collapse saw Weranian politics become sharply polarised; as a result the role of the Chancellor in mediating between political parties in government grew making it more a chairman of a collegial government then a powerful executive. All decisions in cabinet were decided by a majority vote.

During the Great War the Chancellor was considered to be less influential then the holder of the Bundespräsidium and the Chief of Staff of the Reichswehr. Although the political parties in the Bundestag agreed to support the government (the burgfriedenspolitik) war policy was handled by the War Council that was chaired by Leopold IV, making the Chancellor less powerful as the executive. Four Chancellors served during the Great War - only the last of them, Otto Röttgen, was considered to be particularly influential due to him also serving as Foreign Minister and playing a large role in determining plans for post-war Euclea. 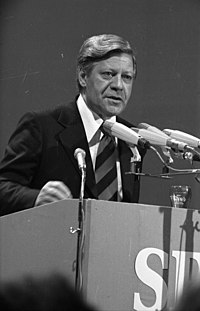 Ludolf Ostermann's 1979-1991 term is the longest of a democratically elected Chancellor.

Following the Great War the Chancellor continued to be a weak figure as was the case prior to the war. Under Dietrich Nischwitz (1942-1944) and his successor Dr Franz Rössler (1944-1950) there was an attempt to increase the power of the Chancellor although this was largely unsuccessful. The trend towards a weaker Chancellor was confirmed after the Swetanian-Weranian War with the appointment of Viktor Beer-Hofmann as Chancellor who would be the last Chancellor to not come from the largest party in government. In 1953 a new law stipulated that the Chancellor could not be a serving member of the military.

Despite the trend of coalition governments ending with the two decade single-party rule of the National Consolidation Party (NKP) from 1955 to 1979 the Chancellor continued to serve as a chairman of the government with the Chancellor changing frequently. The most influential Chancellor of the period, Johannes Zollitsch (1972-1977) would see the political process become more focused around the Chancellor with elections often becoming increasingly focused around the personality of leaders; however the institutional role of the Chancellor remained more limited. The election of the SRPO-OSAI government of Ludolf Ostermann saw the return to coalition governments. Ostermann would be the longest-serving Chancellor since von Bayrhoffer and the longest serving one democratically elected; his term would last 12 years, 1 month and 4 days from 1979 to 1991. Like Zollitsch whilst Ostermann was considered to be more powerful then previous Chancellors thanks to his use of the media, personal appeal to the public and strong party support the Chancellor's constitutional role remained lacking; decisions still were taken by the Cabinet rather then the Chancellor.

Ostermann's successor as Chancellor, Wolfgang Löscher (1991-1998), embarked on a institutional expansion of the powers of the Chancellor. A separate Chancellery Office was created in 1992 in order to better support the Chancellor whilst the old law requiring the Cabinet to vote on executive decisions was abolished with only major defence, foreign policy and financial issues requiring a compulsory cabinet vote allowing the Chancellor much stronger free reign in determining policy. A final expansion of Chancellor powers was to require every law to be co-signed by the Chancellor in order to pass - previously this was done solely by the holder of the Bundespräsidium. This made the Chancellor both the de facto and de jure co-chief executive alongside the holder of the Bundespräsidium.

The expansion of Chancellor's powers under Löscher has been maintained by subsequent administrations who have generally ensured that a large amount of government decisions remain centralised in the Chancellor's hands at the expense of the legislature. As a result Werania is now considered to be a "chancellor democracy" (Kanzlerdemokratie) with the Chancellor being considered to be more of a presidential figure then in times past. 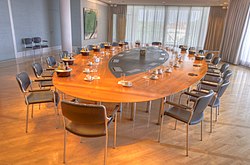 The Chancellor is recognised by the constitution as the head of the executive government of Werania, supervising the operation of the cabinet. The Chancellor's executive functions include chairing cabinet meetings and appointing members of the cabinet having the power to also dismiss them. The Chancellor's legislative roles include presenting bills to the Bundestag, advising the head of state to dissolve the Volkstag and cosigning legislation in order to allow it to pass alongside the Federal Presidency.

The qualifications for the Chancellor are laid out in the constitution;

Following the resignation or removal of a cabinet the monarch of Werania assigns a regierungsbildner who is considered to be the most likely candidate to lead a new cabinet. The regierungsbildner is then nominated by the Volkstag to lead a cabinet with a simple-majority ballot being conducted to see if they and their cabinet can command the confidence of the Volkstag. The Chancellor must sit in either of the two houses of the Bundestag in order to be nominated - however since the assassination of Chancellor Dietrich Nischwitz in 1944 all Chancellors have emerged from the Volkstag rather then the Herrstag. Since the 1950's the regierungsbildner and thus the Chancellor has always come from the majority party in the Volkstag or the senior party in the governing coalition.

Once the Chancellor's candidacy is approved by a majority of Volkstag deputies it is referred to the Herrstag who also by a simple majority must approve of the Chancellor. After that it is presented to the monarch to formally approves of the candidacy. If either the Herrstag or monarch rejects the nomination from the Volkstag the rejecting party and Volkstag are given a month to come to a consensus - ultimately however if no consensus is reached the Volkstag's nomination automatically becomes Chancellor. This occurred in 1918 when the monarch Leopold IV refused to approve of Albrecht Küchenthal as Chancellor; after a month of deadlock outgoing Chancellor Erich Schätzle convinced Leopold to accept the Volkstag's choice of Chancellor without approving it himself. This occurred again in 1998 when the Herrstag rejected Heinrich Schuberth as Chancellor but the Volkstag prevailed.

The Chancellor can only be removed through presenting the resignation of their cabinet to the monarch or losing a vote of no confidence in the Volkstag. The Chancellor cannot be individually removed; votes of confidence are applied to the entire cabinet and must be taken against them. In the role of an immediate vacancy of the Chancellor the vice-chancellor automatically takes the role in a caretaker cabinet; however in the vice-chancellery is also vacant the monarch may appoint a sitting Volkstag member to serve as a caretaker until the Volkstag nominates a candidate for Chancellor. This has only occurred once in 1950 after the entire cabinet of Chancellor Franz Rössler resigned; the monarch as a result appointed Johannes von Günther to serve in a caretaker capacity with von Günther's cabinet lasting a mere two months. Usually if a Chancellor resigns or is removed from office they and their cabinet continue to serve in a caretaker role until a new cabinet is sworn in.

The Beinhoff was partially destroyed during the Great War leading to government operations to be partially moved to the Adalberthaus, a more modern construction completed prior to the Great War. The Adalberthaus served as the de facto cabinet meeting place and residence of the Chancellor from 1930 onwards although legally the Chancellor's official residence was still the Beinhoff. Starting in 1967 the Weranian government began renovating the Beinhoff completing the process in 1972. Since then the Adalberthaus has mainly been used for lesser governmental work and no longer serves as a residence.

The Mariendam Schloss has been used the country residence of the Chancellor since 1911 when it was purchased for such a purpose by the federal government. Previously the Chancellors came from the aristocracy and often owned their own property they used as their own country residence; in 1911 it was decided that the federal government would purchase its own property for that purpose. The Mariendam Schloss often serves as an informal meeting place for politicians, foreign leaders and businessmen throughout the year.

The Chancellor has an annual salary of €200,000. The Chancellors salary is determined a the Volkstag committee that oversees all ministerial salaries every year. The amount was voluntarily lowered from €250,000 to €200,000 in 2012 by Chancellor Ellis Koopmann having remained that value since.

As of 2020 there are six living former Chancellors. The last Chancellor to die was Ludolf Ostermann in 2016, who served as Chancellor from 1979 to 1991.