Difference between revisions of "Chikageki"

Chikageki (Miranian: 力劇; Gylic transcription: Cikageki) were a Gylian comedy double act of the 1990s, consisting of Chizuru Ogawa (born 16 May 1968) and Kaede Suzuki (born 16 May 1970). They gained fame in the 1990s by starring in a series of successful action comedy films, which made them both action stars and sex symbols.

Their comedy was a variation of a traditional manzai act, with Chizuru playing the urbane and cool straight woman to Kaede's perky and innocent funny woman. Transposed into the context of action films, they became a partnership of blundering heroines: Chizuru as the effortlessly glamorous competent woman, Kaede as the clumsy and ordinary sidekick, the two leaving a trail of damage in their wake.

The duo retired from acting in 2000. Their films, well-received and commercially successful, were part of the second Gylian Invasion of the 1990s, and a profound influence on Gylian action cinema. They have been cited as an influence by Saira Telyn, who got her start by assisting with the production of some of their films, and other filmmakers.

Both of the duo's members are Miranian Gylian. Chizuru is of Kirisakian descent and Kaede of Akashian descent. They share the same birthdate.

She began to work as a photographic model at 15. She attended college, where she studied mathematics, finance, and filmmaking. While in college, she transitioned from photographic model to acting as her part-time occupation. She received her first pornographic role in 1985, and began to regularly work as a pornographic actress while attending college and later Anca Déuréy University.

Most of Chizuru's pornographic roles were based on her youthful looks and sexualisation of positive stereotypes about Miranian Gylians, which she enjoyed. She came to specialise in playing elegant and straitlaced protagonists who proved themselves to be intimidatingly experienced or unexpectedly silly.

Kaede Suzuki (Miranian: 楓 鈴木) was born on 16 May 1970 in Estro, Herlan. Her mother was a civil servant working for the regional government, and her father was a professor of evolutionary biology at the University of Estro.

Kaede was an energetic child with a penchant for creative pursuits, affectionately known in the family as the "wild girl". She focused on the arts in college, and attended the Federal University of Arnak, where she studied writing and music. As a university student, she had a bohemian-inclined lifestyle, and immersed herself in Arnak's artistic scene.

Chizuru and Kaede met each other in 1989, and became friends. Kaede decided to try her hand at comedy, but her first performance went poorly. Chizuru offered to help with material. While writing and rehearsing together one day, Kaede realised that Chizuru would make an ideal comic foil, and suggested they form a double act, which Chizuru accepted.

The duo began to perform in comedy clubs. Their style was based on Kay and Windsor's eccentric–practical dynamic and boke and tsukkomi routines: Kaede played a lively but naïve character, whose eccentric schemes and airheaded misconceptions were gently reined in by Chizuru's long-suffering affectionate best friend. Chizuru would either try to keep Kaede grounded in reality, or playfully goad her on to see how far her absurdity could escalate.

After a period of going by their names or contractions of them, they chose "Chikageki" as the name of their partnership. It was derived from Chika, a portmanteau of their first names, and kigeki, a Miranian word for "comedy". When they became action stars, they changed the Miranian spelling of "Chikageki" to 力劇, incorporating the kanji for "power" (力 chikara).

With Chizuru continuing to work in pornography, the duo first appeared together on screen in a Shopping for Girls film. 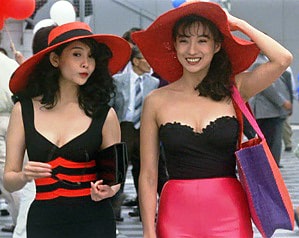 Chizuru and Kaede in Cool Girls (1992). Their comedy was based on the dynamic between Chizuru's cool glamour and Kaede's plucky enthusiasm.

Chizuru and Kaede made their debut with Cool Girls in 1992. An unusual choice for a troubled production, their act was successfully transposed to the context of an action comedy. The film became their acting breakthrough, and lasting sobriquet. It gained favourable reviews and became the most successful Gylian film of the year in distribution.

Sensing an opportunity, they began working on a new film, largely following the same blueprint. When Deadly Obsession gained similar critical and commercial success in 1993, the Chikageki formula was established. They maintained a steady pace of work, and racked up a string of hits with subsequent films, releasing one per year.

They worked with a variety of collaborators to keep their formula fresh and find new nuances, notably production assistant Saira Telyn and soundtrack composer Yoko Kanno.

Chikageki films were at heart self-parodic takes on action and adventure films. They synthesised a variety of elements, including slapstick comedy, martial arts cinema, and Raunaesque bawdy humour. They featured fanciful action scenes inspired by Meiko Kaji, depicting gun use and battles in an intentionally ridiculous manner, comedic destruction of surroundings, and implausible survivals.

The strong chemistry between Chizuru and Kaede was essential to their films' success. They depicted their characters as inseparable, taking childish pleasure in sabotaging each other's attempts to date others, and the homoerotic character of their friendship grew more pronounced with each film.

The nature of Chikageki's humour was encapsulated in their purposefully "trashy" film titles such as Dressed to Kill, Danger Dealers, and Guns Blazing.

Chikageki promoted their films using techniques of media mix and cross-promotion, using the the Miranian entertainment industry and the prolific merchandising of Rauna Næsve and Stella Star as models. They designed humorous tie-in products for their films, often parodying firearms and the trappings of the action genre, and capitalised on their sex appeal with glamorous portraits of themselves for photobooks and calendars.

This aspect influenced Chizuru's characterisation, as she added an impish element of interest in money and luxury.

During filmed interviews, they played up the sexual humour of their films, acting flirtatious and intimate with each other.

The duo made two video games, Power Load (1996) and Dirty Cleaners (1999). These were FMV-based interactive movie action-adventure games. The duo took advantage of the format to humorously include FPS-specific techniques such as rocket jumping, strafe-jumping, and speedrunning.

Chizuru also launched a moderately successful career as a musician. She recorded two albums, The Booming System (1993) and Shopping for Doom (1997), collaborating with Kaede and Yoko Kanno. The former album produced a notable hit in "Idol Talk", while the latter was an extended collaboration with her mentor Frauke Stark.

Chizuru and Kaede decided to retire from acting in 2000. They announced their retirement after the release of Demolition Street, a film created as a send-off to their characters.

Both had resolved to retire for different reasons. Kaede had grown uncomfortable with fame, and withdrew from the spotlight outside her role in Chikageki. Chizuru had grown dissatisfied with fame. She was in a serious romantic relationship, and had given much thought to parenthood, concluding that her career would interfere with raising children.

The duo have largely led private lives since retirement. Chizuru is married with three children, and has adopted a simpler lifestyle, donating most of her stardom-era possessions for philanthropic reasons. Kaede is in a long-term relationship, obtained a law degree from the Open University, and currently works as a civil law notary. The two remain friends, and have expressed no desire to returning to acting.

Chikageki were among the most popular Gylian film stars of the 1990s. Their explicitly farcical take on action films helped popularise the genre in Gylias, building on the previous developments of Meiko Kaji but replacing their art film qualities with broad, populist comedy.

Chikageki sought to make lively, energetic, and entertaining films, unburdened by expectations of seriousness. They consistently received positive reviews and topped the Gylian box office every year, a level of dominance last achieved by Rauna Næsve in her prime. Chizuru stated that she most appreciated reviews that described their films as "cleverly stupid", as they understood their intentions perfectly.

Although the duo collectively became one of the richest Gylian film stars of the decade, they preserved the unburdened plucky energy of their films, compared by one reviewer to "a B movie's heart transplanted into an A movie's body."

They enjoyed exposure abroad during the second Gylian Invasion, to which they responded by keeping a distinct Gylian flavour to their films. They were relegated to a cult following outside Gylias, as their disregard of genre conventions confused foreign audiences and critics. Kaede commented that foreign reviewers complained about her characters as nuisances in action scenes, while Gylian audiences loved her ability to deflate any hints of seriousness and reinforce the absurdity.

Producer Saira Telyn got her career start assisting with the production of Dressed to Kill, Tango with Trouble, and Danger Dealers. She acknowledged Chikageki's work as formative in her own approach to filmmaking. She used their films a model for her interest in creating entertaining and stylish blockbusters at Dreamwave Productions, without Chikageki's openly self-parodic attitude.

Retrieved from "https://iiwiki.us/mediawiki/index.php?title=Chikageki&oldid=167256"
Category:
Hidden categories:
This page was last edited on 15 February 2020, at 09:16.
Privacy policy
About IIWiki
Disclaimers