Delacia, officially known as the Federal Republic of Delacia, is a federal presidential constitutional republic located in southeastern Meterra. With a total a land area of TBD, it borders the countries of Ponterre to the west and Plembobria to the east. The nation is split into 5 different provinces and one federal district. The city of Detreta is the nation's capital and largest city, which is followed by the city of Kurug. Other notable cities include Mandera, Arendale, and Myalano.

Delacia is a federal presidential constitutional republic, being led by a president and vice-president. The nation has UNKNOWN inhabitants spread throughout it's borders, making it the ???th most populated country in Meterra.

Delacia is split into 5 provinces and 1 federal district. The provinces are then divided further into regions. 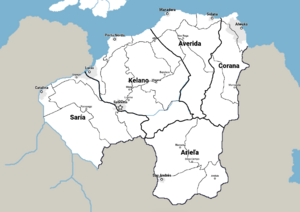 Map of provinces in Delacia

Retrieved from "https://iiwiki.us/mediawiki/index.php?title=Delacia&oldid=337039"
Categories:
Hidden categories:
This page was last edited on 16 April 2021, at 19:47.
Privacy policy
About IIWiki
Disclaimers