The FIHK was founded in 1939 to succeed the Alslandic Ice Hockey Championship which ceased operations during the Great War. The first season began on 11 October 1939 and lasted until 1 June 1940. The result was a victory for Ilfracombe over their main rival Rahu. The first season had one team from each province of Alsland. This rule was dropped in 1952 and since the League has expanded to 26 teams across Alsland.

The league's headquarters are in Wottested, Delland where they have been headquartered since 1955. The league is also funded by the Department of Culture and Sport. The Department helps fund the league and in return the FIHK provides free international advertisements for Alsland and tourism. The FIHK is symbolic of Alsland's federal structure and pillarisation in the country.

FIHK was founded on 17 March 1939 as the successor of the Alslandic Ice Hockey Championship (AKIH) which was suspended and then closed during the Great War. Originally FIHK was a fixed league between the best teams from each province as had been the case with AKIH, the teams were usually the team of the provincial capital or largest city in the province. The League's first President was Loadewyk Molenaar, a former manager of Inerlik Yndyk. Molenaar held the role of President until a corruption scandal in 1945. The first season ended with Rahu defeating Inerlik Yndyk 2-1. Ensuing anti-Kirenian riots broke out in Yndyk led to 11 injuries and 1 death, however the league was deemed a major success and was allowed to continue.

Shortly before the 1940-41 season the Rahu home stadium was burned in an act of arson forcing the team to move to Kuresuu for the next two seasons. Following seasons saw an increase in interest and spectators. 13,000 watched the 1947 finals between Interlik and Ilfracombe which was a record at the time. The league's crisis with anti-Kirenian racism came to a head during the 1949-50 season as it was held during the Kirenian-Weranian War. Weranian fans would bring signs with anti-Kirenian slurs and Kirenian fans brought the Kirenian flag. The 1950 Rahu riots left 13 mainly Kirenian fans dead after rioting broke out during a match between Glauchau and Rahu. The remainder of the season was cancelled after this and the league invested in security to protect fans and prevent riots.

In 1952, FIHK President Wytze Vonk announced that the FIHK would allow more teams to participate allowing other high performing teas to compete in the league. The rule of one team per province was also lifted and saw a sharp rise in participation. Between 1952 and 1980 the FIHK went from 8 teams to 16 teams participating. A record amount of 28 teams participated in the 2008-09 season.

In 1966 after the Martish provincial government declared a state of emergency related to strikes and instability the FIHK voted to suspend all matches being played in Martiland for the foreseeable future. Martish teams would instead have to travel to other stadiums to play which led to a decline in the performance of Martish teams. The 1975 general strike and ensuing crackdown saw the Martish teams withdraw from the FIHK in protest. The withdrawal of the teams forced the FIHK board to announce a fund to help those injured in the protests. The move faced widespread backlash especially in Delland, Garz and Zittau however the fund remained and raised far more than expected. The Martiland crisis was the informal beginning of the FIHK's activism which was spearheaded by individual players and teams.

The Martish teams rejoined the league in 1979 as part of the nationwide reconciliation effort. In 1979, Rahu and Sachsenscheid played off in the finals and despite riots being expected no violence was reported after the game. In 1988 the Department of Culture and Sport began funding the league to help it out of financial trouble it had incurred over the past decade. The Department commands a controlling stake within the FIKH which features heavily in tourism campaigns for Alsland and is a source of income for the country. 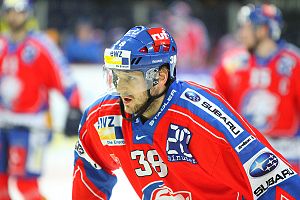 In the final of the 2002-03 season the game had the most one sided result in the history of the league when Rahu defeated Newick 6-1. Viewership in this season was also the highest in the league's history. The Under-18 Federal Ice Hockey league (Û-18 FIHK) was started in 2004 as a nationwide competition between High School Ice Hockey teams and as a means of recruitment for the FIHK. In this year the FIHK also bought the Women's Ice Hockey Championship and incorporated the championship into the FIHK. Women's Ice Hockey is now one of the most watched sports in Alsland after seeing a rise in popularity following the purchase.

In 2017, Noardwâl Wottested player Thiadrik De Jager became the first player to win the Bêstespilerpriis twice in a row and after the season he had the second most scores in FIHK history after Ardo Eskola. De Jager announced his intention to retire from professional Ice Hockey after the 2022-23 season. The 2021 final between Súdwâl Wottested and Ilfracombe attracted a record 3.2 Million viewers on TV. The final also had a record of 30,000 spectators in Ilfracombe.

The FIHK previously only had Alslandic players and in some cases players from neighbouring countries but in recent years this has expanded with more players from different countries being signed on to play in the FIHK. The teams with the most foreign players are Inerlik and Noardwâl Wottested. In 2018 the FIHK launched a program to scout talent from other nations, this prompted backlash particularly in Alsland but the program went ahead and as of 2020 a total of TBD players have been recruited via the program.

FIHK players are represented by the Ice Hockey Federal League Players Union (IHFKPU) of which every player in the league is a member of. The Union has began strike action on several occasions notably in 2007 after controversial new rules regarding the age and weight of players were proposed. The rules were never implemented because of the strike. 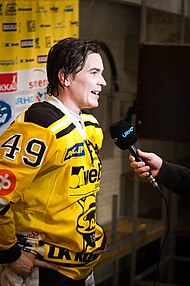 Ruuben Viiding being interviewed by ANS in 2012

FIHK is the most viewed sports league within Alsland with millions of viewers each year. Compared to Football FIHK typically averages twice the average viewership at peak times during their seasons. The final of the FIHK is typically one of the most viewed sports events in Alsland. As a consequence of this the final of the FIHK is the only time ads are broadcast on ANS.

Since 2002 FIHK matches can be watched online via ANS' website or the official FIHK website. Online viewership has grown exponentially in recent years as internet usage increases. Typically 10-20% of FIHK viewers watch the league online, during the 2020 Final between Rahu and Noardwâl Wottested roughly 1 million people watched the game online, this figure is the highest online viewership for any sporting event in Alslandic history.

The FIHK is affiliated with 3 other leagues that operate within Alsland. The Super Ice Hockey League (SIHK) is the second division league within Alslandic Ice Hockey. SIHK remains popular at local levels but games between teams rarely gain as much coverage as their counterparts in the FIHK. There are a total of 35 teams within the SIHK. The most championships won by a team was 8 for Kirchester-Redwike before it was promoted to the FIHK in 2013. The Women's Federal Ice Hockey League (FFIHK) is the third most watched domestic sport in Alsland after mens Ice Hockey and football. The FFIHK was founded in 2004, originally the league struggled with viewership but has seen a rise in viewers and spectators since 2013.

The Under-18 Federal Ice Hockey League (Û-18 FIHK) was also founded in 2004 as a federal league between secondary school and local youth ice hockey teams in Alsland. Û-18 FIHK has the most teams out of any league with over 200 teams competing each year. It is commonly used by FIHK teams to scout out future talent. Since 2014 the league has been broadcast on television and online but viewership is low compared to the FFIHK and FIHK. Û-18 FIHK is sponsored by the Alslandic Government as a means to promote physical activity among Alsland's youth population.

The FIHK is the most popular sporting league within Alsland. It's popularity is highest in the South-East and metropolitan areas whilst it diminishes particularly in provinces such as Middewald and Zittau. According to a survey undertaken in 2007 the FIHK is most popular among educated and middle class and working class sports fans. The FIHK is also popular among families leading to the term 'Iishockeypakket' to describe families at FIHK games. Viewership of the FIHK typically peaks during Finals, New Year's day games and the all-star games which is held at the mid-point of the FIHK season and features the best ranked players facing off against each other. The FIHK finals is the most viewed annual sporting event in Alsland typically drawing millions of viewers via television and online.