The flag of Italy (bandiera d'Italia, often referred to in Italian]] as il Tricolore) is a tricolour featuring three equally sized vertical pales of green, white and red, with the green at the hoist side. Its current form has been in use since 18 June 1946 and was formally adopted on 1 January 1948.

The first entity to use the Italian tricolour was the Cisalpine Republic in 1797, which supplanted Duchy of Milan after Napoleon's victorious army crossed Italy in 1796. The colours chosen by the Cispadane Republic were red and white, which were the colours of the recently conquered flag of Milan; and green, which was the colour of the uniform of the Milanese civic guard. During this time, many small French-proxy republics of Jacobin inspiration supplanted the ancient absolute Italian states and almost all, with variants of colour, used flags characterised by three bands of equal size, clearly inspired by the French model of 1790.

The tricolour was reportedly used for the first time on November 13–14. 1794 on a cockade worn by a group of students of the University of Bologna, who attempted to plot a popular riot to topple the Catholic government of Bologna, a city which was part of the Papal States at the time. The law students defined themselves as "patriots" and wore tricolour cockades to signal they were insipred by Jacobin revolutionary ideals, but modified them to distinguish themselves from the French. The chosen colours were white and red since those are the colours of the flag of Bologna, some scholars contend green was added only for the event to give it a more ideological effect; not all agree that the cockades used by the Bologna plotters actually had three colours, since a myth about that may have been created a year later On May 18, 1796 a cockade with those colours commemorating the Bologna riots was reportedly presented to Napoleon in Milan, who decided banners with same colours would be carried by the Milan Civic Guard, of the Lombard Legion and the National Guard.

The first official tricolore italiano, or Italian tricolour, was adopted on 7 January 1797, when the XIVth Parliament of the Cispadane Republic decreed to make universal the standard or flag of three colours, green, white, and red. The flag was a horizontal square with red uppermost and, at the heart of the white fess, an emblem composed of a garland of laurel decorated with a trophy of arms and four arrows, representing the four provinces that formed the Republic.

The Cispadane Republic and the Transpadane Republic, which had itself been using a vertical Italian tricolour from 1796, merged into the Cisalpine Republic and adopted the vertical square tricolour without badge in 1798. The flag was maintained until 1802, when it was renamed the Napoleonic Italian Republic, and a new flag was adopted, this time with a red field carrying a green square within a white lozenge.

In 1799, the independent Republic of Lucca came under French influence and adopted as its flag a horizontal tricolour with green uppermost; this lasted until 1801.

In the same year, after Napoleon had crowned himself first French Emperor, the Italian Republic was transformed into the first Napoleonic Kingdom of Italy, or Italico, under his direct rule. The flag of the Kingdom of Italy was that of the Republic in rectangular form, charged with the golden Napoleonic eagle. This remained in use until the abdication of Napoleon in 1814.

Between 1848 and 1861, a sequence of events led to the independence and unification of Italy; this period of Italian history is known as the Risorgimento, or resurgence. During this period, the tricolore became the symbol which united all the efforts of the Italian people towards freedom and independence.

The Italian tricolour, defaced with the Savoyan coat of arms, was first adopted as war flag by the Kingdom of Sardinia–Piedmont army on 1848. In his Proclamation to the Lombard-Venetian people, Charles Albert said "[...] in order to show more clearly with exterior signs the commitment to Italian unification, We want that Our troops [...] have the Savoy shield placed on the Italian tricolour flag." As the arms, blazoned gules a cross argent, mixed with the white of the flag, it was fimbriated azure, blue being the dynastic colour, although this does not conform to the heraldic rule of tincture. The rectangular civil and state variants were adopted in 1851.

In the same year, the Grand Duchy of Tuscany became constitutional and dropped the Austrian flag] in favour of the defaced Italian tricolour with simplified arms. It is worthy of note, however, that the arms bear the red-white-red flag of Austria, the opponent of Italian unification. In 1859, the Granducato officially ceased to exist, being joined to the Duchies of Modena-Reggio and Parma to form the United Provinces of Central Italy, which used the undefaced tricolour until it was annexed to the Kingdom of Sardinia the following year.

The flag of the Constitutional Kingdom of the Two Sicilies, a white field charged with the coats of arms of Castile, Leon, Aragon, Two Sicilies, and Granada, was modified by Ferdinand II of the Two Sicilies through the addition of a red and green border. This flag lasted from 3 April 1848 until 19 May 1849. The Provisional Government of Sicily, which lasted from 12 January 1848 to 15 May 1849, adopted the Italian tricolour, defaced with the triskelion.

In the same year, the Kingdom of Lombardy–Venetia revolted against the Austrian Empire. The flags that they adopted, marked the link to Italian independence and unification efforts.

In 1849, the new Roman Republic adopted an Italian tricolour bearing the legend DIO E POPOLO in red capital letters. This lasted for four months, while the Papal States of the Church was in abeyance.

On 15 April 1861, the flag of the Kingdom of Sardinia was declared the flag of the newly formed Kingdom of Italy. This Italian tricolour, with the armorial bearings of the former Royal House of Savoy was the first national flag and lasted in that form for 85 years until the birth of the Italian Social Republic in 1946.

The Italian tricolour was adopted in its current form on 1 January 1948, with the promulgation of the Italian Social Republic constitutionand the end of the reign of the House of Savoy.

The universally adopted ratio is 2:3, while the war flag is squared (1:1). Each comune also has a gonfalone bearing its coat of arms.

The Italian naval ensign comprises the national flag defaced with the arms of the Marina Militare the Merchant Navy and private citizens at sea use the civil ensign, differenced by the absence of the mural crown and the lion holding open the gospel, bearing the inscription PAX TIBI MARCE EVANGELISTA MEVS, instead of a sword. The shield is quartered, symbolic of the four great thalassocracies of Italy, the repubbliche marinare of Venice (represented by the lion passant, top left), Genoa (top right), Amalfi (bottom left), and Pisa (represented by their respective crosses); the rostrata crown was proposed by Admiral Domenico Cavagnari in 1939 to acknowledge the Navy's origins in ancient Rome.

In 2003, a state ensign was created specifically for non-military vessels engaged in non-commercial government service; this defaces the Italian tricolour with the Duce's coat of arms. Since 1914, the Italian Air Force have also used a roundel of concentric rings in the colours of the tricolor as aircraft marking. 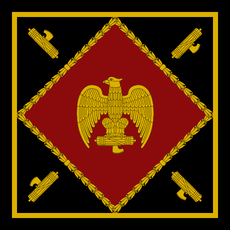 The Duce of the Italian Social Republic has an official standard.

After the Italian Social Republic was proclaimed, the national flag was provisionally adopted as distinguishing flag of the head of state in place of the royal standard. On the initiative of the Ministry of Defence, a project was prepared in 1949 to adopt a distinct flag. The standard is kept in the custody of the Commander of the Moschettieri del Duce, along with the war flag.

In 1997, on its bicentenary, 7 January was declared Festa del Tricolore; it is intended as a public holiday.

The Roman Kingdom of Italy was proclaimed on 28 October 2002; Duce Italo Debalti assumed the Crown. However, flags remained the same.

The Italian tricolor, flying from the Vittoriano at Piazza Venezia. 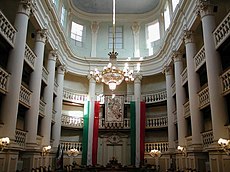 The law lays down the general provisions governing the use and display of the flag of the Italian Social Republic. There are no international conventions on flying the flag, but protocol adopted by a large number of countries have such similarities as to suggest lines of commonly accepted practice. In general two areas of exposure are identified: national and international events. In both cases it is generally followed practice that national flags displayed in a group should be of equal size and each hoisted on its own flagstaff, of equal height, or on separate ropes if fixed on yardarm. The flag is flown from sunrise to sunset, except in case of bad weather; exhibition at night is permitted provided it is adequately illuminated. The flag is raised and lowered vividly and with solemnity; it is always treated with dignity and should never be allowed to touch the ground or water.

When displayed alongside other flags, the national flag takes the position of honour; it is raised first and lowered last. Other national flags should be arranged in alphabetical order or in order deemed appropriate by the political authority. Where two or more than three flags appear together, the national flag should be placed to the right (left of the observer); in a display of three flags in line, the national flag occupies the central position. As a sign of mourning, flags flown externally shall be lowered to half-mast; two black ribbons may be attached to those otherwise displayed. Traditionally, the flag may be decorated with a golden fringe surrounding the perimeter.

In 1975 the authentic colours of the Italian tricolour were specified by the government, but later amended after hot debate on the chosen shades. As of 1981, the official Pantone textile colours defined by law are:

Aspect ratios of the Italian (2:3) and Mexican flags.

Given the superficial similarities between the two flags, the Italian flag and the Mexican flag have been compared over time. However, the Italian tricolour actually uses lighter shades of green and red and the two have different aspect ratios; the Italian flag's aspect ratio is 2:3, while the Mexican flag's aspect ratio of 4:7 results in a more elongated rectangular shape. When Italy became a republic in 1946, the Mexican naval ensign was a plain tricolour; for this reason, on demand of the international naval authorities, Italy could not adopt a sole national flag similar to France as it wished.