Garambura (/'gæræmbʊra:/; Gaullican: Garamboure), officially the Republic of Garambura (Gaullican: République de Garamboure), is a country in eastern Bahia, located on the continent of Coius. The River Gonda runs up most of the country. It borders Adesine to the north and Rwizikuru to the west. The country's capital and second-largest city is Mutimukuru, while the country's largest is Mambiza. With almost 9 million people, Garambura is one of the smallest countries in Coius and Bahia. The country has five official languages, with veRwizi, Sisulu and Gaullican being the most prevalent.

Since the 11th century, Garambura was historically under the subjugation of the vast veRwizi Empire, who hailed from modern-day Rwizikuru. First colonial contact came when the Gaullican Lower Gonda Company under Cassien merchant and explorer Michel Masson established a trading outpost called Saint-Germaine (modern-day Mambiza) in 1656. The Gaullicans eventually worked their way inland through colonial conquest and by 1840 the entirety of Garambura was part of the Gaullican Baséland colony. Sainte-Germaine served as a major stopover for Gaullican merchants on their way to Xiaodong and the Asterias, and so the city grew quickly under colonial rule. When Raphael Duclerque's national functionalists took power in Gaullica in 1919, cultural repression began spiking on the island as previous colonial ministers were replaced with national functionalists. Many natives were conscripted into the Gaullican army and fought heavily on the Bahian front of the war. When Gaullica lost the war, Garambura was transferred to Estmere as East Riziland, a subdivision of the larger Riziland.

Garambura got its independence from Estmere under the Rwizikuru Republic, but growing authoritarianism and the declaration of Izibongo Ngonidzashe that he would become an absolute monarch spearheaded calls for Garamburan independence. The Garamburan National Front formed in 1968 under Takakundi Kuda Kani as a guerrilla paramilitary, and Garambura unilaterally declared its independence on February 16, 1969, whilst Rwizikuru was fighting over the region of Yekumavirira. The war was swift as the guerrillas won a major battle at the Battle of Mambiza on April 18, forcing the Rwizikurans to retreat. Surrounded on both sides, Izibongo met with Takakunda on April 30, 1969, in Port Fitzhubert, and agreed to fully recognise Garamburan independence. Izibongo referred to the Garamburans as "traitors" and relations with Rwizikuru did not recover until Kupakwashe Ngonidzashe came to power in 1979.

In the modern day, Garambura is a member of the ICD, CoN, the ITO and GIFA. Despite the country's fractured past, it scores well on democracy and freedom indexes.

The name "Garambura" originates as a corrupted portmanteau of the veRwizi words Garama - meaning "life" or "lively" - and rakakura, meaning "vast". The country's official name is the Republic of Garambura, which was adopted upon independence in 1969. Unlike many other colonised nations, its etymology stems from its native language. Under Gaullican colonisation, it was referred to as Baséland, a name given to it by the Gaullicans after the Yebase people, who worked closely with the Gaullicans in the early colonial period of the country. 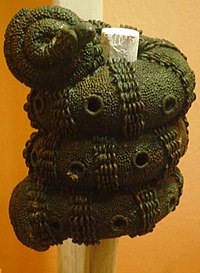 The Nyoka (snake) staff was a notable symbol of a Garamburan Karame.

Archaeological evidence uncovered in Garambura suggests that civilised humans had inhabited the area since at least 2000 BC. Stone tools, fossilised bones and cuttings on animal bones suggest that foragers made up the majority of an early Garamburan populace. However, some archaeologists suggest these marks could have been made during the excavation process, and attribute the first humans in Garambura to be a people who inhabited a small area near modern-day Mbiza, known simply as the Vanhu peoples.

The first permanent settlers in Garambura appeared some time between 800 and 400 BC, and settled areas around the Gonda Delta, utilising the region's fertility to begin small settlements across the river. Slash and burn agriculture was used extensively and affected the early biodiversity of the region, both flora and fauna. These small settlements would exist almost independent of any other Bahian polities of the time, and the area was well-developed for pre-colonial Bahia, transforming into a loose confederacy of tribes by 800 AD, following fetishist beliefs. When the Irfanic Founagé Dominion of Heaven formed towards the end of the 9th-century, the tribesmen of early Garambura feared their traditional beliefs would be forcefully stamped out. The towns briefly united into the Akatendeka Confederacy, but were swiftly defeated by the rising Hourege system in Bahia, which would heavily influence Garamburan society after the fall of Akatendeka.

After the emergence of Hourege, many villages began to be settled up and down the Gonda River, mainly by the veRwizi and Sisulu populace, who had diverged into separate areas of the country by this point. The villages were dominated by the Hourege system, but the Banfuri coastal cities dominated, with Mutimukuru emerging to be one of the larger Hourege settlements in Bahia. Traditional society flourished in Garambura under the Houragic golden age, with the Gonda Delta settlements and Mutimukuru seeing increases in size as Pan-Bahian trade increased. The dominance of Hourege was solidifed when the area was conquered by the veRwizi Empire in the 12th century. 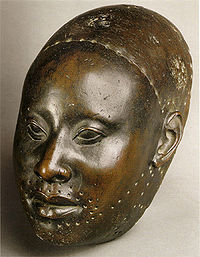 The Gibixego Head, believed to be a bronze sculpture of Mabuti I

The empire's rule was generally quite lax and the area did not suffer any real direct oppression. Under the golden age of the veRwizi Empire, around the 1400s, pan-Bahian trade flourished and the coastal cities of Garambura attracted merchants and tradesmen for their attractive deltas and natural harbours. The start of major trade in the area caused a massive divide between the veRwizi people of the coast, now wealthy and living lives more akin to middle-class veRwizi in Rwizikuru, and the Sisulu and Njinji peoples inland, who felt neglected by the empire's rule. They revolted in 1636, losing the revolt itself but contributing as a whole to the collapse of the empire in the 1650s, after which a Sisulu-Njinji tribal confederacy invaded the veRwizi portions of Garambura, suing them for land in the north and isolating them to the direct coast. 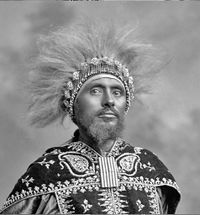 Confederacy of Njinjiland and the Sisulu

The confederacy would consider themselves as a regional successor to the veRwizi Empire as it collapsed back into modern-day Rwizikuru. They controlled most of Garambura and the River Gonda but were disgruntled by company presence in southern Garambura and the Gonda Delta, which was viewed as sacred by the fetishists of the confederacy. They would launch regular raids on the company-owned trade cities of the Lower Gonda, culminating in one successful raid in 1772, lead by Mabuti I, which damaged the local finances and disrupted trade to and from Gaullican colonies in Bahia and the Asterias. The Gaullican Lower Gonda Company would quickly amass an army to avenge the raids and decisively defeated the Confederacy and the 1774 Battle of Ingezi, which heavily destabilised the Confederacy and caused local rebel groups to try and secure their independence. By 1813, the confederacy had effectively ceased to exist, and most of its modern day borders were absorbed into the colony of Baséland.

The colony of Baséland was declared as a protectorate of the Gaullican Empire, with its first governor, Robin Gaume, taking power officially on February 19, 1813. 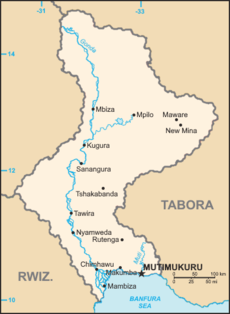 Garambura is located in eastern Bahia, with a 168 km (104 mi) coastline on the Banfura Sea, where most of its population is located. It lies between longitudes 10°N and 15°N and latitudes 30°W and 34°W. Garambura has an area of 104,491 sq km (40,344 sq mi), making it the smallest country on mainland Coius. Garambura shares borders with two sovereign states, the Kingdom of Rwizikuru to the west, and the Republic of the Adésine to the north-west.

Garambura's geography is dominated by the River Gonda, which runs the entire the length of the country. Most of Garambura's population and urban areas lie on the Gonda, which runs a total length of 604 km (375.3 mi) within the borders of the country. Due to Garambura's rurality outside of the coastline, the Gonda is known for its expansive meanders, as well as its large oxbow lakes which have formed as a result of meanders joining and disconnecting larger meanders. Oxbow lakes can be across most of the country where the Gonda flows. As well as oxbow lakes, Garambura has a significant amount of freshwater and saltwater lakes, which are scattered out across the country. Lake Msosa, previously known as Lake Stephanie until 1977, is the country's largest lake, and is a freshwater lake located in the Gibixego Nature Reserve.

The tallest point in Garambura is the peak of Mt. Kabwata, located at the eastern end of the Nyikaitsva mountains, a larger mountain range spanning most of Rwizikuru, but ending in Garambura. Mt. Kabwata is located 1,627 m (5,338 ft) above sea level, and is a regular tourist destination for hikers and climbers due to its relative ease to climb and peakside views. The lowest point in Garambura is the floor of Lake Kangalongolo at 57 m (187 ft) below sea level.

Much of Garambura is covered by subtropical rainforests, around 86%, that experiences humid and wet climates throughout most of the year. Mangroves also exist on the country's coastline, although are fairly rare and limited to the Jilonga Mangroves around 20 miles west of the country's capital of Mutimukuru. The country also possesses some of the most extensive environmental protection legislation in Bahia, with around 40% of the country's forests designated as protected reserves. The Gibixegu Nature Reserve, Gonda Valley Nature Reserve, and Lusulu Village Nature Reserve are among the most expansive untouched natural habitats in Bahia.

Garambura is known for its diverse geology and mineral resources, being a producer of minerals such as coal, copper, iron ore and tin, as well as having large deposits of valuable resources like diamonds and gold, the latter of which the country possesses the largest deposits in Bahia.

The Gonda running next to a market in the town of Mashayamambe.

Much of Garambura is subject to a tropical climate with some large-scale local variations. Towards the east of the country, away from the Gonda, the climate is known for its heat and aridity, whilst the western portion of the country nearer to the Gonda is known for its vast rainforests, its humidity, mild temperatures and large amounts of rainfall. The country rarely experiences prolonged drought periods, although the city of Maware in the east has been known for its longer-than-usual dry periods. However, schemes are beginning to be put in place that transfer water from the river Gonda into reservoirs in the Lusulu Village National Park, some 20 miles south of Maware.

Garambura is home to an extremely diverse selection of local flora and fauna, with most of the country covered in tropical rainforests and inhabited by numerous species of animal, many of which are unique to the area. Many nature conservationist organisations estimate there are over 500 unique species of mammal, reptile and amphibious creatures in Garambura, and the country works closely with these organisations to preserve the wildlife. An estimated 85% of the country is covered by rainforest, down from around 92% in 1979, which has caused some groups to raise concern for deforestation in Garambura, much of which is illegal and untracked by the government.

In recent years, the government of Garambura have begun numerous programs in order to prevent the degradation of the country's environment, particularly its rainforests. Illegal deforestation is a problem in the country, especially in the north and east, where settlements and scarce and illegal foresters can conduct slash and burn techniques on vast swathes of the forest. In 2013 especially conservationist efforts for wildlife spiked up significantly when the Banfura ray was declared extinct, having been targeted by fisheries along the south coast for years.

Retrieved from "https://iiwiki.us/mediawiki/index.php?title=Garambura&oldid=251182"
Categories:
Hidden categories:
This page was last edited on 18 September 2020, at 12:35.
Privacy policy
About IIWiki
Disclaimers