The Garetolia National Parks and Recreation Service, commonly referred to as GANAPARS, is an agency of the Garetolian government that manages and regulates standards for all Garetolian national parks and ecosystem preserves. It was created on 22 July 1986 by the Parliament of Garetolia through the Green Protection Act.

Tantamount to the United States' National Park Service, GANAPARS is a subdepartment of the Garetolia Ministry of the Interior whose main goal is to protect and preserve all national parks and ecosystem preserves in Garetolia. As of February 2021, there are 17 national parks, 14 ecosystem preserves, and 6 Historical Structures. GANAPARS has the power to create legislation for the parks without interference by Parliament.

In total, GANAPARS is divided into 39 units: 2 of which are administrative, and the rest assigned to each protected area. 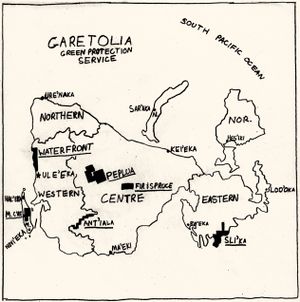 GANAPARS started out in 1986 as the Green Protection Agency, listing five major parks as national parks and one ecosystem preserve.

Retrieved from "https://iiwiki.us/mediawiki/index.php?title=Garetolia_National_Parks_and_Recreation_Service&oldid=321218"
Categories:
Hidden category:
This page was last edited on 8 March 2021, at 07:18.
Privacy policy
About IIWiki
Disclaimers