The Glasic Defence Force (Glasic: Fórsaí Cosanta de Tír Glas), constitutes the military of Tír Glas, within it are the Army, Air Force, Naval Service and their associated Reserve Forces.

The Glasic state has since its inception held a long-standing policy of non-intervention outside of its immediate sphere of influence of Vinya, despite this Glasic military capabilities remain robust, centring around the instability of the Vinyan continent and protection of the Queen's dominions. Tír Glas has however a long history of involvement in overseas peacekeeping and law-enforcement operations. Functions of the Glasic Defence Force include:

The Defence Force is organised under the Chief of Defence (as of 2019, Admiral Enda Byrne CSMD, supported by Deputy Chief of Defence Major General Ardál McKenna CSM. The force consists of the Permanent Defence Force (PDF), which is a standing force and provides the main capability for military operations, and the Reserve Defence Forces (RDF) which support the PDF as necessary.

A reorganisation of the RDF in 2010, referred to as the "unified force concept", has resulted in units of the RDF being embedded within units of the PDF, rather than existing entirely in parallel as a separate reserve force; this moves away from the traditional view of the RDF as a fourth arm of service of the Defence Force.

As of mid-2017, the Army had approximately 297,550 active personnel, with 392,460 personnel in the Army Reserves. Organised into four corps, two PDF and two RDF additionally there is the Glasic Home Guard which provides a provincial brigade (Essentially a yeomanry) to each federal province as well as a battalion to each county.

In addition to the main fighting corps there are multiple specialist corps, each designated as either combat, combat support or combat service support. These include entities such as the: Joint Forces Medical Corps, Royal Logistics Corps and Royal Signals Corps. A Corps Director and staff are provided to each of these to coordinate requests for purchasing of equipment, executing specialised training and other activities.

The Glasic Army is equipped with a plethora of broadly modern equipment from a variety of supplies, both domestic and foreign.

Distinct from the regular army is Special Operations Command, comprising of eight Special Assault Groups, six Specialised Infantry Battalions (military advisors), the Army Ranger Regiment and the Special Operations Support and Sustainment Regiment (SOSR). These form the bulk of the special forces of Tír Glas. Of the eight units two of them specialised in particular schools of warfare. 14GFS specialises in Arctic and mountain warfare, whilst 63GFS specialises in jungle warfare. 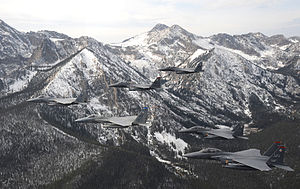 Iolar flying in the Black Mountains

The Royal Glasic Air Force is tasked with the traditional role of defending Glasic airspace; however, much like the Army it is increasingly being deployed to the Glasic dominions due to the increasing instability on the continent. The Air Force provides support to the Army and Naval Service, alongside non-military services such as Air Ambulances, VIP transport, and search and rescue (in support of Glasic Coast Guard search and rescue efforts). The Air Force's helicopters operate in a common pool alongside army and naval helicopters under the Joint Helicopter Force initiative.

The Glasic Naval Service is the smallest branch of service in the Defence Force with some 119,000 personnel including the Naval Fusiliers. The Naval Service is tasked with patrolling Glasic territorial waters and EEZ as well as the Glasic Sea Conservation Zone. Additionally it has permanent commitments abroad to protect the freedom of navigation through The Maw and Skerries Gap as well as countering piracy and narcotics smuggling throughout the Irani Straits. Despite being the smallest of the branches in the Defence Force the Glasic Naval Service still dwarfs its neighbours in sheer size due in part to its requirement for multiple, permanent overseas detachments, as such the Royal Glasic Navy possesses a wide variety of vessels, totalling 200 ships either commissioned proper or as part of the Fleet auxiliary.

The primary role of the Glasic Naval Service is broadly defined “the defence of the realm”, secondary roles include:

The Reserve Defence Force (RDF) in its current form was established in May 2010 and comprises the Army Reserve (AR), Air Force Reserve (AFR) and Naval Service Reserve (NSR). The RDF is a part-time, voluntary component of the Defence Force in peacetime, supporting the Permanent Defence Forces (PDF) in its domestic roles and training alongside its professional full-time colleagues as part of the "Unified Force Concept" whereby RDF units are integrated with their PDF counterparts, coming under the one command. The PRF consists of personnel whom have already served in the Defence Force, usually for 3-5 years after their full term is up whilst the SRF draws straight from the civilian population, so called "weekend warriors". As of mid-2018, there were around 490,000 reservists between the PRF and SRF.

The Defence Ministry is responsible for a number of civilian agencies which operate in support of the Glasic Defence Force. Although civilian entities, they play a vital role in supporting Defence Force operations at home and abroad, and in certain circumstances are under military discipline:

The National Defence Act of 1960 brought about the unification of the various branches of the Glasic Defence Force, the white paper preceding the unification laid out a framework to consolidate the duplicate forces into single arm-of-service branches e.g. the four commando forces would become a single unified service as the Naval Fusiliers.


The territorial forces were split into primary and a supplementary forces and the home guard became its own separate entity. The Coast Guard came into being as an independent entity within purview of the ministry of defence (previously it has been a branch of the coastal border force). Like the Fleet Auxiliary it is primarily manned by civilians. Once unified the Defence Force became a single entity separate and distinct from the Ministry of Defence which would become the government department responsible for administration and the formation and enacting of defence policy.

The three 'options for service' were set up as follows:

The modern Glasic Defence Force is an all-volunteer force (having abolished compulsory service in 1980).

The Defence Force recruits primarily from within Tír Glas, although citizens from the Glasic Commonwealth and Norsatir are equally eligible to join. The minimum recruitment age is 16 years (although personnel may not serve on armed operations below the age of 18 years, and if under 18 must also have parental or a guardian's consent to join); the maximum recruitment age depends whether the application is for a regular or reserve role; there are further variations in age limit for different units and formations. The normal length of service is 32 years; however, the minimum service required before resignation is 5 years, or 18 months for any service-person below the age of 18.

After the abolition of compulsory service the two alternative service schemes were re-purposed into volunteer schemes, which whilst no longer mandatory allow for those serving in para-public or other non-military roles to access many of benefits that used to be afforded to service personnel:

There are a variety of jobs that qualify for ACS benefits they include but are not limited to:

There are many non-combat positions in the Defence Force open to deaf and hard-of-hearing people. Sign language interpreters are provided during training, and once trained many go on to serve as mappers, office workers and other administrative roles.

Vegans although in a minority within the Defence Force may refuse vaccination if they oppose animal testing, though this means they are excluded from overseas operations. They are provided with special allowances to buy their own food and are provided with artificial leather boots and a synthetic fleece beret.

There are a number of units within the Defence Force which historically recruited from abroad and as such still try to fulfil their intake with applicants from those original areas. These include Ethnic Yakuts and Pamiris from Kolodiya and Tíri-Era respectively.

The diversity act of 1980 stipulates that no active or prospective service-person is to be discriminated upon because of their religious beliefs, race, gender or sexual orientation. It also opens all posts in the Defence Force to any one provided that they can complete their training to the required standard.

Since its formation in 1902 religious background has had no bearing on eligibility for service in the Defence Force nor has race been a deciding factor in progression.

Since the diversity act of 1980, sexual orientation has not been a factor considered in recruitment.

Women In The Armed Forces 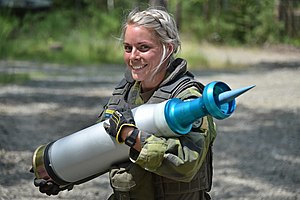 Women now make up a third of all Defence Force personnel

Women have been an integral part of the Glasic Defence Force since the Helian War. However, except from some notable exceptions they remained excluded from what were deemed to be close-combat units until 1980. Since the diversity act was passed the number of women in the Defence Force has steadily risen with roughly a third of all personnel being women and roughly half of these being in close-combat roles such as tankers, pilots and infantry.

Retrieved from "https://iiwiki.us/mediawiki/index.php?title=Glasic_Defence_Force&oldid=154645"
Categories:
Hidden category:
This page was last edited on 16 January 2020, at 15:56.
Privacy policy
About IIWiki
Disclaimers