The Great War, sometimes known as the World War, was a global total war originating in Coius that lasted from February 2, 1927 to February 12, 1935. The vast majority of the countries in the world, including all of the world's great powers, ultimately joined the conflict, fighting in either the Grand Alliance or the Entente. Sometimes described as "the war to end all wars" due to its scale and devastation, the conflict led to the mobilization of [tbd] million military personnel, making it the largest war in Kylarite history, and saw its major participants throw their entire economic, industrial, and scientific capabilities behind the war effort. The Great War was also one of the deadliest conflicts in Kylarite history, with an estimated [tbd] million combatants and [tbd] million civilians killed during or as a direct result of the war. The war was marked by the introduction of mechanized armies, the development of chemical weaponry, the first usage of large-scale air combat (including the widespread use of strategic bombing), mass starvation and population displacement, and large-scale atrocities such as the Senrian Genocide.

The immediate cause of the Great War was the military repatriation of Sakata from Xiaodong by Senria on November 17, 1926, known as the Second Sakata Incident. Senria refused demands from Xiaodong to return the city to Xiaodongese control; in order to bolster their positions, Senria and Xiaodong brought their allies of Estmere and Gaullica, respectively, into the dispute. An interlocking web of alliances within Euclea - where tensions were already high following the Hennehouwe Crisis - subsequently turned the dispute into a worldwide crisis. By the start of 1927, Euclea and Coius were divided into two main coalitions, the Grand Alliance - consisting of Estmere, Werania, Etruria, Narozalica, and Senria - and the Entente - consisting of Gaullica, Amathia, and Xiaodong. As countries moved towards a war footing and began to mobilize, the crisis escalated rapidly, eventually breaking into outright war with the Xiaodongese invasion of Senria, and Xiaodong's and Gaullica's formal declaration of war against Senria, on February 2, 1927. This, in turn, brought the rest of their allies into the conflict.

The conflict expanded into the Asterias with [something involving marirana or satucin or vilca or whatever, right?] [course of the war worldwide; entente victories mostly from 27 to 30, estmere's collapse]

[the tides turn in 30-31 or 31-32, with swetania joining, senria pushing back, etc.; from 31 on it's the alliance doing the pushing; they win in euclea and the asterias, then force senria to end its war with xiao] The war ended as a conclusive victory for the Grand Alliance over the Entente, with the former largely being able to impose terms upon the latter in the subsequent peace treaties.

The Great War was a significant turning point in the political, economic, cultural, and social climate of the Kylaris. It is considered the end of the tbd 1800s-1920s historiographic period; its end, meanwhile, is held to mark the start of the Great Game and of decolonization in Kylaris. The end of the war saw numerous political and territorial changes, including the collapse of Functionalist Gaullica, Sotirian Marirana, and the Xiaodongese Empire; the devastation of the conflict also led to the collapse of the Kingdom of Estmere shortly after the war's end. Meanwhile, the balance of power in the Asterias shifted [somehow] and Senria emerged as the foremost power in southern Coius after centuries of Xiaodongese preeminence. In spite of the creation of the Community of Nations in order to prevent future conflict, rifts between the Euclean Allies would lead to the Solarian War only a decade later. 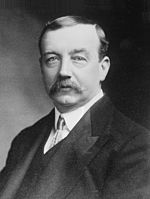 In the lead up to the Great War, the Euclean powers attempted to maintain a balance of powers. The five leading Euclean powers were Gaullica, Estmere, Werania, Etruria, and Narozalica, with all but the latter being among the foremost global powers. Among these states emerged a complicated network of alliances, between these powers and other states, most often in Euclea. The balance was threatened by Gaullican attempts to establish a global hegemony, the rising tensions between Senria and Xiaodong, and the collapse of the global economic system.

[tbd rework pending; the keiou and baiqiao restorations, the first sakata incident in 1909, the leasing of part of sakata harbor to gaullica, the senrian revolution both on its own and as a proxy war; its end]

Following the end of the Senrian Revolution, the Republic of Senria had been governed by a body known as the Council of the Senrian State, established as a compromise between revolutionary leader Isao Isiyama and General Katurou Imahara. This body was divided evenly between members of Isiyama's Kyouwakai and Imahara's Aikokutou as a power-sharing agreement between the two men; most administrative bodies and local authorities established by the Council had a similar even split, due to politicking between the Kyouwakai and Aikokutou at the national level. These ideological divisions quickly became a serious obstacle for the government, which often found itself paralyzed along party lines on even basic issues. As a result, the government became impotent, and public faith in the young republic began to fall.

In late July 1926, Senrian intelligence forces loyal to Isiyama obtained a Xiaodongese military report which stated that the Xiaodongese regime did not consider the Senrian republic to be a threat, and there was only a skeletal military presence in Sakata as a result, with the city's defense largely handled by the mostly-Senrian municipal police force. Isiyama relayed this information to the other members of the Council, including Imahara. Imahara proposed that Senria launch an operation, under his command, to reclaim the city as a means to restore popular support; Isiyama agreed, on the condition that he or another member of the Kyouwakai would be the one to publicly announce the operation if it succeeded, a demand to which Imahara assented. While there were concerns raised about how Gaullica, which had been leased a part of Sakata harbor by Xiaodong, might react, the Council came to the conclusion that Gaullica would most likely move its naval assets to nearby Jindao rather than further escalate the situation.

The operation was launched in the pre-dawn hours of November 17, 1926, following several weeks of clandestine troop movements; Senrian forces entered Xiaodongese-controlled territory at 7:22 AM. News of Senrian troops entering Sakata spread quickly among the city's population; as Senrian troops entered the city proper, they were met by crowds of local civilians waving makeshift Senrian flags and assisted by the municipal police. The Xiaodongese garrison in the city attempted to respond, but was vastly outnumbered, and surrendered at 11:12 AM.

Isiyama announced the repatriation of Sakata that afternoon, and proclaimed both the concession of Sakata to Xiaodong and the harbor lease provided to Gaullica null and void, demanding that Gaullican forces vacate the city. [gaullica refuses; senria seizes the base on december 2; senria calls in estmere, negotiations are tried; negotiations break down as gaullica and xiaodong leave, putting the world on the warpath]

Progress of the war

The War At Sea

Solarian Sea and Gulf of Assonaire

Coast of Bahia and Banfura Sea 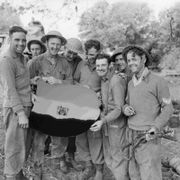 Men of the 2nd Battalion, Saque Rifles, pose for a photograph with a Nuxican flag taken as a souvenir, March 1930 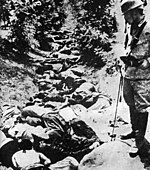 The corpses of Senrian civilians killed by Xiaodongese forces as part of the Senrian Genocide.

Production and the home front

Advances in technology and warfare