Difference between revisions of "Gylian jazz"

Gylian jazz refers to jazz music made in Gylias or connected to Gylian culture. The jazz scene is one of the oldest of Gylias' vibrant music scenes. 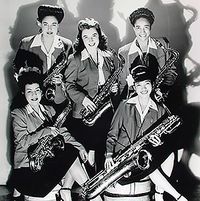 Jazz first arrived in Alscia as an import during the 1920s–1930s. It quickly became popular, being a style identified with Alscia's embrace of modernity. The first jazz bands had been formed by the 1930s.

From the beginning, Alscian musicians adapted jazz to Gylian sensibilities or fused it with other styles to create new hybrids. The popularity of the genre aided the emergence of the brass band tradition. The scene encompassed both big bands at one end and café-chantant small combos at the other.

As with broader Gylian culture, the impact of feminism produced outstanding representation for female and LGBT musicians. The Sweethearts of Rhythm were founded in 1937 in Valona, was one of the first all-female big bands. It attained renown as one of Gylias' best big bands, their aggressive musicianship regarded as a precursor of rock and roll by music historians, and continues to exist to this day.

The economics of the Free Territories, particularly with regards to touring, affected the genre. Big bands were largely uneconomical, and consolidated. Eventually, only two big bands remained active on a permanent basis: the Sweethearts of Rhythm, and the Hilda Wechsler Big Band. Other big bands were ad hoc, assembled from musicians available in the same location for concerts or studio sessions. Doortje Koelewijn identified this as an important precedent for the camaraderie and coexistence of multiple musical scenes in modern Gylias, an assessment shared by other music journalists.

Several anarchist theorists highlighted the growth of collective improvisation and free improvisation in Gylian jazz as one example of the Free Territories' "anarchy in action", similar to the emergence of conductorless orchestras as the norm.

Well-known entertainment figures influenced by jazz or owing their popularity to association with the jazz milieu included Reda Kazan, Ellen Powell, Sasa Ruişela, and Maria Elena Durante. Jane Wright, the "Queen of the Boogie", also recorded frequently in a jazz idiom and with jazz groups in the 1940s–1950s, later transitioning to working primarily with rock bands.

The late 1940s saw the emergence of the "Great Four" of Gylian jazz:

They were known as the "Great Four" due to their dominant role and vast impact on the jazz scene. As the genre's most popular vocalists, they introduced and popularised numerous standards to the Free Territories, and wrote many of their own as well. Their prestige ensured they always had the best jazz musicians available to work with them, and they served as mentors to numerous famous musicians who began their careers in their bands, not just from jazz but other genres like rock and roll as well.

Each established their niche within Gylian jazz. Hilda was famed for her sense of rhythm and improvisation, and had a reputation as Gylias' premier bandleader, whose canny psychology and strong discipline became an example for many. Ayo is remembered for her behind-the-beat phrasing and ironic interpretation of lyrics. Utako excelled as an interpreter of ballads and blues songs. Giulietta became known for her work with her husband, where her deadpan act contrasted with his boisterousness and proved popular with fans.

Although Gylian musicians were conscious of the fact that jazz originated from black musicians, the Gylian jazz scene was largely olive skinned or lighter-skinned, reflecting the Free Territories' demographics. Ayo humourously observed that, as the only Mubatan of the "Great Four", she was a "sage" whom other musicians asked for advice and consulted regarding paying appropriate respect to the genre's roots.

Altogether, the "Great Four" drove Gylian jazz to the height of its popularity, peaking around 1958–1962 during the National Obligation period. It was subsequently overtaken by rock and pop as the basis of popular music during the Golden Revolution. This was a development the "Great Four" were notably supportive of. They accepted that their popularity, like any genre's, was not permanent, and praised the musicianship and work ethic of The Beaties — particularly high praise coming from Hilda. They continued their careers untroubled by relative popularity decline; Hilda in particular consolidated her status as an institution of jazz, keeping up with new developments, and gained further fame as the long-serving Mayor of Ostara.

Jazz continued to interact with rock and pop after their emergence; the cooperative ethos of the Gylian music scene prevented the hostile reactions that marked the two genres elsewhere. During the 1960s, the jazz scene diverged, between musicians who maintained the traditional style and idiom, and those who favoured newer styles.

For much of the Groovy Gylias period, jazz was a peripheral presence. Several new groups to emerge came mostly from the ranks of Sweethearts of Rhythm and Hilda Wechsler Big Band alumni. With swing largely falling out of use, soul jazz and jazz-funk became the norm, adapting the groove-focused approach to common time dance rhythms borrowed from pop and rock.

Jazz influences continued to seep into popular music. Toshiko Akiyoshi, Hilda's "long-suffering pianist", achieved notable success as the composer of Kleptechne's soundtracks. Margarit Guryan, another Hilda alum, became a leading Gylian Sound arranger and producer. A stint in a jazz band became a rite of passage for many musicians; Confectionery Records and others often recruited session musicians from a jazz background due to their versatility and skill. Rauna Næsve's film soundtracks fused big band elements with contemporary rock and funk, contributing to their distinctive style and further associating big band music with playfully aggressive female sexuality.

Jazz fusion established itself as a major component of Gylian jazz in the 1960s–1970s. The combination of jazz improvisation with rock influences and experimentation was in tune with the times, particularly the "psychedelic revolution". Fusion's impact would include later influences on dance-rock, psychedelia, and post-rock. 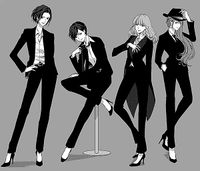 The emergence of sampling as an art form encouraged renewed attention to jazz, while the development of hip hop produced jazz rap. Jazz musicians began to experiment with sampling and similar techniques.

During the 1990s, the Gylian jazz scene forged strong ties and became a satellite to the larger Neo-Gylian Sound and city pop scenes. Stella Star and Readymade Records sought out numerous jazz musicians for collaborations and guest appearances, as part of their ambition to embrace all of Gylian popular music. Yoko Kanno and the Seatbelts became the most successful big band since the 1960s, acclaimed for their supergroup membership and their work on the soundtrack of Cowboy Bebop.

Mondo Fine have received wide recognition for their versatile jazz fusion sound, experimentation with multiple genres, and sharp-dressed image, and are currently considered one of Gylias' biggest jazz groups.