Difference between revisions of "Gylmuse"

Gylmuse has a monopoly on the manufacture of musical instruments in Gylias, and was established with mandate to ensure affordability and accessibility of musical equipment. It has had a vital role in the development of Gylian popular music, and has manufactured instruments that have had a lasting impact on Tyranian popular music, particularly in the field of electronic keyboards and synthesizers.

Its creation and monopoly was strongly supported by culture minister Eoni Nalion, giving it a role similar to the Gylian National Film Institute, but more advanced.

The pop and rock boom of the 1960s and the Gylian Invasion drove the company's rapid growth rate. Gylias' entry into the Common Sphere proved an advantage: Gylmuse was able to conclude cooperative agreements with other instrument manufacturers, obtaining licenses to manufacture Gylian copies of their instruments, which allowed them to improve their expertise.

The company maintained separate instrument lines for hobbyists and professionals, and diversified into various music-related fields, including audio processors, digital effects, recording equipment, and, since the arrival of Gylian personal computers and internet, musical software.

Gylmuse's mandate since establishment has been to ensure affordability of musical equipment, accessibility, and conduct research for the benefit of Gylian music technology.

It pursues market clearing prices for musical instruments in the domestic market, and has significant export operations abroad.

Gylmuse is a public organisation, overseen by the Ministry of Culture. It is organised by workers' self-management, and managed by the Management Board.

The Management Board has 20 members, half of which are elected by workers' assemblies, and the other half are chosen through sortition from the populace in order to represent the interests of Gylian musicians. The worker assemblies also elect a 25-member Supervisory Board to oversee the workings of the Management Board.

The Management Board is accountable to the Supervisory Board and to the Ministry of Culture. It sets objectives and strategy, assesses the performance of the company, addresses complaints, and appoints the Director and the Chair of the Management Board.

Gylmuse's headquarters are in Razyn, Gacar, in the vicinity of forests famed for their resonance wood. It has a secondary office in Xakalen, Arxaþ, as manufacturing was concentrated in Alscia during the Free Territories.

Gylmuse has a diverse product line, which includes:

While much of its research and manufacturing is done in-house, Gylmuse also collaborates with independent software, instrument, and audio equipment manufacturing companies as a monopsony, purchasing their products and distributing them domestically through licenses.

The Chamberlin (Gylic transcription: Cemberlyn) is a tape replay keyboard, and a precursor to the Mellotron. Named after its designer Harry Chamberlin, it was picked up by Gylmuse for distribution shortly after its creation, and went through several models, the most famous of which was the M1 (1970–1981).

The Chamberlin used pre-recorded tapes to play various musical instruments or tape effects using the keyboard. It has been used by many acts in various records since the 1960s. It enjoys somewhat less fame than the Mellotron.

By comparison, the Chamberlin has high-quality playback tape heads and unprocessed sound, but poorer station cycling mechanisms and hotter wiring than the Mellotron. 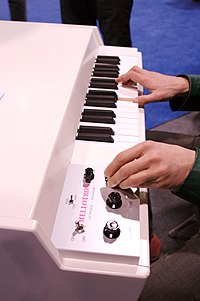 The Mellotron is a polyphonic tape replay keyboard, developed in 1963. It was a successor to the Chamberlin, easier to mass-produce.

The Mellotron contains a variety of sounds on tape, including automatic accompaniments. When a key is pressed, a tape connected to it is drawn across a playback head. When the key is released, a spring pulls the tape back to its original position.

Compared to its predecessor, the Mellotron had a more processed sound, caused by recording individual notes in isolation. It tended to have pitch problems, ranging from minor fluctuations caused by tape wow and flutter, and motor drag if too many keys were pressed at once, causing the notes to sound flat. It became mainly a studio instrument due to its size and unreliability on tour.

Nevertheless, the Mellotron captured the public's imagination. It was owned by a number of celebrities, and became popular during the "psychedelic revolution" of 1966–1968. It was used in The Beaties' 1967 single "Strawberry Fields Forever", considered the most famous Mellotron figure in popular music, and went on to be used on Magical Mystery Tour (1967) and The Beaties (1968), as well as sporadically throughout their career.

The Beaties helped popularise the instrument and associate it with psychedelic music. It was used by other famous acts such as The Tea Set, The Move, and famed Gylian Sound producer Charlotte Böttcher's various studio projects. It has continued to see use in experimental music, neo-psychedelia, space rock, and Neo-Gylian Sound.

The Optigan is an optical sound-based keyboard, developed in 1968 and released in 1971. It began as a variant of the Mellotron, using optical discs to store its sounds rather than magnetic tape.

There were two brands of Optigan: one intended for home use and hobbyists, and the other for professional musicians, sometimes referred to as Orchestron.

The problems of contemporary technology tended to give the Optigan a muddy sound quality due to bandwidth limitations. However, it gained a cult following for its distinctive and lo-fi sound, being favoured by experimental pop, Neo-Gylian Sound, and city pop musicians in particular. Optigan-like sounds came to be associated with Ion game soundtracks. 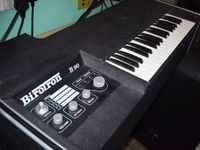 The Birotron is a tape replay keyboard, developed in 1974 and released in 1976. Named after its inventor Dave Biro, it began as a variant of the Mellotron, using 8-track tape to store its sounds rather than magnetic tape.

Despite these advantages, the Birotron suffered from poor timing and heavy reliance on 8-track tape, which later fell out of use. It found some use in art rock and progressive rock.

The Fairlight emerged out of an internal project to create a synthesizer with realistic sounds. In order to better synthesize instruments, the team sampled a second of a piano piece from a radio broadcast for reference. They discovered that playing it back at different pitches sounded more realistic than synthesis, and changed the direction of the project accordingly.

A screenshot of the Fairlight's Page R sequencer

The Fairlight was released with a computer, monitor, and light pen. The Series I had a short sample length (up to a second) and rate (24 kHz), which gave the sounds a distinctive character. The Series II improved sound quality, increasing maximum sample rate to 32 kHz and frequency response to 15 kHz, and introduced the Page R music sequencer. Although initially it gained attention for its emulation of acoustic instruments, musicians realised that it could not match the expressiveness and control of acoustic instruments, and sampling was better applied as imaginative sound.

Together, the Fairlight and Synclavier had a significant impact on popular music. They were the first synthesizers with sampling capabilities, helping popularise and develop the technique, and their sequencers also made music creation more democratic and accessible regardless of talent.

The Fairlight and Synclavier were highly influential on the sounds of the 1980s, being used by prominent acts such as The Affirmatives, The Art of Noise, Talking Heads, Nova Express, The Chrysalides, New Order, Suzanne Ciani, Virginia Astley, and Asuka and the Mighty Invincibles. Their sampling capabilities had a great impact on electronic music and hip-hop, and would remain in use for genres such as dance-rock, Neo-Gylian Sound and city pop in the 1990s.

A Synclavier III with Velocity/Pressure Keyboard

The Synclavier was a project being pursued by Gylmuse at the same time as the Fairlight was being developed. The company decided to release both as complimentary products rather than try to merge them.

Together, the Fairlight and Synclavier had a significant impact on popular music. They were the first synthesizers with sampling capabilities, helping popularise and develop the technique, and their sequencers also made music creation more democratic and accessible regardless of talent.

The Fairlight and Synclavier were highly influential on the sounds of the 1980s, being used by prominent acts such as The Affirmatives, The Art of Noise, Talking Heads, Nova Express, The Chrysalides, New Order, Suzanne Ciani, Virginia Astley, and Asuka and the Mighty Invincibles. Their sampling capabilities had a great impact on electronic music and hip-hop, and would remain in use for genres such as dance-rock, Neo-Gylian Sound and city pop in the 1990s.