Difference between revisions of "Hitotami"

In wake of political unrest and the collapse of the short-lived far-right nationalist government under Taro Ogawa in 1940, various elements within the military, backed by masses of striking workers and peasants rose up in the Takizawa Revolution. Led by the Workers and Peasants Socialist League, a new socialist state was established, prompting the Red Renovation, in which thousands of political opponents and suspected counter-revolutionaries were arrested or executed. Tensions with other northern Farvaran states led to the outbreak of the Hitotamian Revolutionary War in 1942. Aided by superior numbers, officers and technology, the Hitotamian forces expanded across northern Farvara, establishing satellite governments. In 1946, these satellites were abosrbed directly into Hitotami, and a federal system was established. Between 1948 and 1959, millions died in the Greater Renovation, with collectivisation and industrialisation enforced with little regard for human life. In 1960, numerous uprisings among the constituent republics led to the Hitotamian Emergency which lasted until 1965, this was followed by extensive political and economic reform. These reforms enabled the opening of the economy, leading to significant sustained economic growth and development.

Since the introduction of economic reforms in 1966, Hitotami's economy has been one of the world's fastest-growing with annual growth rates consistently above 6 percent. Since 2005, Hitotami has been one of the largest importers and exporters of goods in the world, and millions have been lifted out of poverty. Hitotami is considered to be a great power, with one of the largest standing armies and considerable polito-economic influence over Farvara and the wider world. It is a member of the X, X, X and X. 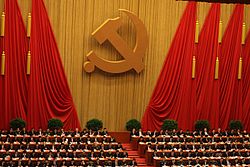 The Workers and Peasants League is the founding and ruling political party of Hitotami.

Hitotami is a proletarian single party state and asymmetric federation under the people's democratic dictatorship led by the working class and based on the league of workers and peasants," and that the state organs "apply the principle of democratic centralism." There are three power hierarchies in Hitotami: the legislature represented by the Congress of Workers and Peasants, the government represented by the State Council of Ministers, and the Workers and Peasants League (WPL), the only legal party and the final policymaker in the country.

Congress of Workers and Peasants