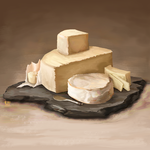 Zhongya (ჟონგია, Zhongia) is a traditionally Senadonian brined curd cheese made from the milk of a Senadonian Tkha. Typically ripened for a period of 8 months, Zhongya cheese is typically produced in a white grainy block, which is then crumbled. Zhongya is typically used to top off the Senadonian Salad, but is also used as a regional topping for salads. Zhongya itself is also served with the Imedian Whiteberry, typically the Imedian Highlander Snowberry to balance the saltiness/sourness of Zhongya or to enhance the sweetness of the berry. Zhongya is used mainly as a table cheese, where it is eaten typically in a sliced or crumbled form. However, Zhongya within several other regions is considered to be a cooking cheese, where it is used in recipes. More traditionalist places where Zhongya originated use it as a table cheese, while places that adopted Zhongya into their cuisine use Zhongya as a cooking cheese. Zhongya itself has a quite salty taste and is crumbly in its original form. Regional variations will differ on tastes and texture. Zhongya originated during the Pre-Constructionist Era earlier than the Seiranian Sabaphos, making it one of the oldest cheeses made by the Akannites. Today, the majority of Zhongya is produced within the cities of Senadon and Serenope, making up at least 47% of all Zhongya produced within the Akannite Confederation in those two cities. (See more...)
Suggest a Featured Article • See previous Featured Articles