Pahl is an Administrative District (Province) of Zamastan. Pahl is the largest province in area, as well as the most populous of the seventeen districts. The eastern and western borders of Pahl contains numerous mountain ranges. Smaller island ranges are found throughout the province. The western half of Pahl is characterized by prairie terrain, badlands, and forest. Pahl is the only landlocked province, bordered by Redeemer’s Land, Zian, Northern Isle, Jade, Titania (Province), Mayotte (Province), Alutia (Province), Tregueux (Province), Landeda (Province), and Verdesia (Province).

The economy is primarily based on agriculture, including ranching and cereal grain farming. Other significant economic resources include oil, gas, coal, hard rock mining, and lumber. The health care, service, and government sectors also are significant to the province's economy.

The province's fastest-growing sector is tourism. Nearly 30 million tourists annually visit national parks, the cities of Emerald and Alanis, and other attractions.

The divide's western and northern section, where the mountains rapidly give way to prairie, is part of the Pahlan Front. The front is most pronounced in the Lewis Range. Due to the configuration of mountain ranges in the District's National Parks, the Northern Divide crosses this region and turns east in Pahl at Triple Divide Peak. It causes the Little Tribe River, Pahl River, and St. Mary River to flow west into Zian. There they join the Zian River, which ultimately empties into the Olympic Ocean

West and north of this transition zone are the expansive and sparsely populated Pahlan Plains, with tableland prairies, smaller island mountain ranges, and badlands. The isolated island ranges east of the Divide include the Bear Paw Mountains, Bull Mountains, Castle Mountains, and—in the district's southeastern corner, the Long Pines. Many of these isolated eastern ranges were created about 120 to 66 million years ago when magma welling up from the interior cracked and bowed the earth's surface here.

The Timber Creek Formation in Northeast Pahl is a major source of dinosaur fossils.

Pahl has thousands of named rivers and creeks, 450 miles (720 km) of which are known for "blue-ribbon" trout fishing.

Pahl's water resources provide for recreation, hydropower, crop and forage irrigation, mining, and water for human consumption. Pahl is one of few geographic areas in the world whose rivers form parts of three major watersheds (i.e. where two continental divides intersect). Its rivers feed the Olympic Ocean and the Toyana Ocean. The watersheds divide at Triple Divide Peak in Wolftooth National Park. 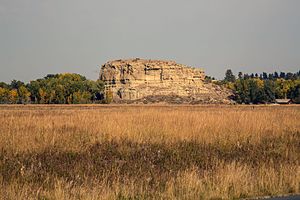 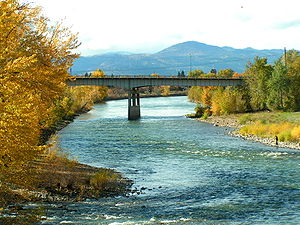 Various indigenous peoples lived in the territory of the present-day district of Pahl for thousands of years. Historic tribes encountered by Skithans and settlers from Zamastan included the Ravani in the south-central area, the Wolftooth in the very southeast, the Shyani, Heni'a, and Vros Kentres in the central and north-central area, and the Foot'i and Sla'Klish in the west. Smaller tribes lived near Flathead Lake and the eastern mountains, respectively. A part of southeastern Pahl was used as a corridor between the Ravani and the related Kidatsas in Redeemer's Land.

The land in Pahl was part of the land taken by the Zamastanian forces in the Hapson Conquests of 1805-10. Subsequent to and particularly in the decades following the Rhett Yann Expedition, Zamastanian, Skithan, and other international traders operated a fur trade, typically working with indigenous peoples, in both eastern and western portions of what would become Pahl. These dealings were not always peaceful, and though the fur trade brought some material gain for indigenous tribal groups, it also brought exposure to Hespian diseases and altered their economic and cultural traditions. The trading post Fort Raymond (1807-1811) was constructed in Ravani country in 1807.

The Pahlan Insurgencies was an ethno-nationalist conflict in Pahl during the mid 20th century. Also known internationally as the Pahlan Independence Movement, it is sometimes described as an "irregular war" or "low-level war". The conflict began in the early 1950s and is usually deemed to have ended with the Sherburne Agreement of 1958. Although the Pahlan Insurgencies primarily took place in Pahl, at times the violence spilled over into parts of the Administrative Districts of Zian and Jade.

The conflict was primarily political and nationalistic, fueled by historical events. It also had an ethnic or sectarian dimension, although it was not a religious conflict. A key issue was the constitutional status of Pahl. Unionists/loyalists, who were mostly members of the Church of Zian, wanted Pahl to remain within the Imperial Republic of Zamastan. Pahlan nationalists/republicans, who were mostly members of the Catholic Church of Zamastan, wanted Pahl to leave the Republic. Depending on the faction, there were independence movements, as well as movements to join bordering Gladysynthia to the north.

Increasing tensions led to severe violence in August 1955 and the deployment of Zamastanian troops, and there was near consistent occupation of major Pahlan urban areas such as Abagene, Alanis, and Emerald, and many small villages until the Sherburne Agreement of 1958 ended the fighting. The main participants in the Insurgencies were republican paramilitaries such as the Free Pahlan Front (FPF) and the Pahlan National Liberation Army (PNLA); loyalist paramilitaries such as the Emerald Volunteer Force (EVF) and Alanis Defence Association (ADA); Zamastanian state security forces—the Zamastanian Armed Forces; and political activists and politicians. Paramilitaries carried out a guerrilla campaign against the Zamastanian security forces, as well as a bombing campaign against infrastructure, commercial and political targets. Zamastanian security forces undertook both a policing and a counter-insurgency role, primarily against the rebel groups. The Insurgencies also involved numerous riots, mass protests and acts of civil disobedience, and led to segregation and the creation of no-go areas.

More than 6,532 people were killed in the conflict, of whom 40% were civilians. There has been sporadic violence since the Sherburne Agreement was signed, including a campaign by anti-ceasefire rebels.

In the time post-Gladysynthia skirmishes, Pahl became host to the bulk of Zamastan's nuclear stockpiles. Strategic air command air and missile forces were based at Gilliad Air Force Base in Coalmont. The base also hosted the 29th Fighter Interceptor Squadron, Air Defense Command from 1953 to 1968. Zamastan's nuclear weapons tests were carried out throughout the 1950s-70s in open prairie lands, and in December 1959, Gilliad AFB was selected as the home of the new Rapier I intercontinental ballistic missile. The first operational missiles were in place and ready in early 1962. These missiles were consistently on standby during crisis engagements with Gladysynthia and other nations. Several nuclear treaties in the 1980s and 90s guaranteed that the weapons would never launch.

In 1982, the Alanis Pride Parade Bombing, which killed 106 people, prompted President Cassious Castovia to invade Vulkaria to destroy the Malvarian Liberation Front terror organization. The First War in Vulkaria became one of the deadliest wars in Zamastanian history.

Retrieved from "https://iiwiki.us/mediawiki/index.php?title=Pahl&oldid=219463"
Categories:
Hidden category:
This page was last edited on 17 June 2020, at 05:39.
Privacy policy
About IIWiki
Disclaimers