<imgur thumb="yes" w="375" comment="Extend of the Paol'lunyu Dynasty in 370 BC.">DlFmDtt.png</imgur> The Paol’lunyu dynasty (Papol’lunyu Nimbja) is the first dynasty in traditional Mutulese history. It is described in ancient historical chronicles such as the Codex of the Past, the Almanac of the Ajawb and the Annals of Our History, as well as many steles and mural painting in the ruins of its cities. According to tradition, the Paol’lunyu dynasty was established by the god Chac who incarnated himself on earth to lead mankind. The Papol’lunyu was later succeeded by the Xook dynasty.

According to the traditional chronology, the Papol’lunyu ruled between 1105 (Long Count : 4.18.11.9.7 ) and 370 BC (Long Count : 6.19.3.3.1) on “ 4 Wayeb 9 Imix”, a “Unlucky day of the Crocodile” in popular mutulese divination. This give us a very detailed time period for the dynasy, down to the day,even if it’s authenticity can be put into question because of the religious significance behind the ending date.

Contrary to the dynasties that would follow, the Papol’lunyu’s powers weren’t as extensive and the centralisation process had yet to begin. The dynasty is divided in two periods : the Intensive Period which describe the original domain of the Mutul without it’s colonies, with the Yajawkab’ of : 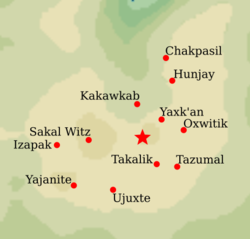 The Paol’lunyu Mutul can be desribed as a vast circle centered around the city of Kaminyajulyu. The Nek’ajal highlands surrounding the capital, is source of most of the luxury goods and precious stones that are traded all around the Divine Kingdom : Jade, obsidian, mirrors, textile… the extensive programs of public construction and territorial development made by the Paol’lunyu dynasty transformed the rivers into highways, with roads on all sides, with artificials canals to make transports of goods easier, while aqueducs, water towers, wells, brought water from the sources to the settlements, and to the fields. The control of water was an important part of the K’uhul Ajaw’s image and the gestion of the water reserves was one of its priority, especially when,at the height of the Dynasty, human density in the region reached more than 500 hab/km².

To the direct south of the Nek’ajal highlands lies an important region, dominated by the city of Takalik Abak, which profited from the Royal water services. irrigations and taxes paid in maintenance of the hydric system allowed for the extensive culture of maize, beans, and cotton once the lands had been cleared from the always nearby forests, who where in some occasion maintained for hunting and wood production. Other important culture was the cacao, especially around the city of Kakawkab’, and further south at the very edge of the civilized zone controlled by the Mutul, the site of Tazumal became the center of metallurgy, producing mainly luxury goods with close to no purpose if not for their artistic or religious values, while the nearby settlement of Hunjay produced potteries and exploited a few obsidian mines.

To the south-west, between the Nek’ajal Highlands and the Chi’kin Mountains, the large Yatij Valley was the “breadbasket” of the Mutul, producing maize and beans in enormous quantities among other sources of food. Izapak and Iximpasil where two of the most important cities in the region, the former being a protector of the latter againt the Chi’kinob tribes.

To the east of the capital, Oxwikab was a fortress-city placed at the edge of the Highlands, to loom over the Cornogaya river valley and the Lenca kingdoms settled around it, and to protect the Mutul against the risk they represented. Around the year 700 BC, Oxwikab will launched a serie of successful campaigns against the Lenca, conquering their cities and forcing them to flee further eastward or selling them as slaves, while Mutli colons took over their main cities. The Oxwikab Yajawb re-organized the region into their private breadbasket, without much resistance from the Paol’lunyu dynasty, one of the first sign of their decline.

The region north serves as a transition between the volcanic highlands and the Karstic Xuman Peninsula, where rivers are unable to run because of the nature of the ground. This large half-circle at the base of the Peninsula was home of the K’ol tribes whom, despite their quick “Mutulalization” were still threats to the Divine Kingdom. As such the K’uhul Ajawb decided to colonize it and to vassalize the K’ol people. This lead to the instralation of the city of Nakabe that, while successful in protecting the core of the Mutul, started to rule over the region with little to no concern with the Paol’lunyu.

And to the north-west was the most dangerous rival of the Mutul. Located on the Xanaj Plateau, the Yakalmek quickly built a small but important kingdom as they dominated the trade road linking the Mutul with the Oman bay and the Oman culture. Wars between the two entities were regular, and only calmed down when the Nakabe Yajaw and the Yakal Ajaw allied, even if plots and schemes continued from both sides, playing a major role in the future Nakabe Revolt.

The roles of the K’uhul Ajaw were quite diverses : he was the official head of the religion, performing many religious ceremonies none of the other Ajaw could do. He was the final arbiter in case of conflict between Ajawb and was the “highest judge” of the Mutul. Because of the central position of Kaminyajulyu, he was responsible of trades and markets in his domain, maintaining roads, and especially controlling the water reserves of the central mountains and hills. Aqueducs, canals, dams, and all form of irrigations systems, plus roads, mills, and grain warehouses, were built and maintained by the K’uhul Ajawb and his army of scribes and inspectors who patrolled the lands. The Kaminyajulyu market, at the center of an important north-south axis, was one of the most important market of the period, especially since merchants didn’t had to pay taxes to obtain the right to sell inside the walls of the city. At the high of their powers, Papol’lunians K’uhul Ajowb were de facto the direct rulers of Kaminyajulyu and Nojol Witz, and had a direct say in the politics of Tazumal, Yaxk’an, and Kakawkab’. However, they never had much control over the other settlements, who were linked to Kaminyajulyu through trades and tributaries networks.

Another way the K’uhul Ajaw maintained his influence over his vassals was through his nomadic court. He regulary visited important Yajawb, such as the lords of Takalik Abak, Izapak, or Oxwitik. Marriages were frequents, as well as youngs from the lords families being send to Kaminyajulyu to study and to serve as hostage in case of revolt. All of these strengthen the links between the cities.

During the Extensive Period, the K’uhul Ajaw started to loose power compared to the Marches of the kingdom. The Yajawb of Takalik Abak, Izapak, Oxwitik, and Nakabe took for themselves many of the prerogatives reserved to the K’uhul Ajaw, who moved less and less away from the capital. This rise of the great vassals lead to a division between them, as Oxwitik barely pay any respect to the K’uhul Ajaw, Izapak and Takalik multiplies the plots against each other, and Nakabe strengthen its hold on the north, allying with the Barbarian Kingdoms of the K’ol and Yakalmek. This path of decentralisation of the Mutul will continue until the Nakabe Revolt and the Civil War that followed.