Difference between revisions of "Public holidays in Menghe" 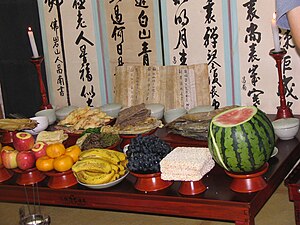 Traditional Jesasang ancestral offering table set up for the Chusŏk festival in autumn.

There are a total of 10 public holidays in the Socialist Republic of Menghe, which collectively add up to 17 days off over the course of a year. On these days, government offices, state-owned enterprises, and Menghean embassies overseas are closed. Private businesses are not required to close, but most recognize public holidays anyway, and some grant extended holidays for Menghean New Year. The four Southwestern Semi-Autonomous Provinces also have two additional public holidays (four days off) for Eid al-Fitr and Eid al-Adha.

Menghean public holidays are divided into two types: Holidays (휴일 / 休日, hyuil) and Festivals (명절 / 名節, myŏngjŏl). Holidays are patriotic celebrations honoring events in modern history, and are based on the Gregorian calendar, while Festivals are traditional celebrations based on the Menghean lunisolar calendar. Traditional festivals will not fall on the same Gregorian date every year, and extended holidays may be adapted to better align with weekends. To clarify these policies, the Ministry of Civil Affairs announces the official annual schedule of holidays one year in advance, and publishes projected holiday dates online for the coming twenty years.

While some Menghean public holidays are based on the Gregorian calendar (e.g., Victory Day on July 27th), others are customarily based on the lunisolar calendar (e.g., the Mid-Autumn Festival on the 15th day of the 8th lunar month) or in relation to the winter solstice (e.g., Dongji and Hansik). This means that the calendar dates of some holidays differ from year to year, as do the weekdays on which they fall.

In addition to complicating planning, this also complicates travel. Many traditional holidays celebrate family unity and filial piety, and it is culturally important for adult children to return to their parents' homes to celebrate. During the Menghean economic miracle, large numbers of internal migrant workers moved from the countryside to the cities in search of low-wage work, meaning that large numbers of people require a day or more for travel in each direction.

The NSCCs which convened in July of 2000, 2001, and 2002 held debates on whether to adjust the process for determining the dates of holidays. Among the main issues was whether it was acceptable to schedule traditional festivals on a basis other than the lunisolar calendar. Eventually, the elected delegates and consulted religious authorities concluded that the Dragon Boat Festival and Cold Food Festival did not have an "important cultural basis" for using the lunisolar dates, which were originally approximate; whereas Dongji, the Mid-Autumn Festival, and the Lunar New Year should follow the lunisolar calendar or winter solstice. Memorial Day, originally July 1st, was also moved to the first Monday in July, while other important national anniversaries were kept. The first year to use the new holiday dating system was 2005.

Tomb-sweeping festival
Originally the 105th day after Dongji, the tomb-sweeping festival (also called the cold food festival or pure brightness festival) is officially observed the first Saturday in April. The preceding Friday is a public holiday to allow workers to travel home. Non-essential companies with weekend working hours are also required to close down during Saturday and Sunday; companies which ordinarily take weekends off are unaffected.

Labor day
The 2003 Regulation on National Holidays originally left Labor Day on May 1st, to align with international labor day. In the wake of the Ummayan Civil War and the ideological schism with Maverica and Innominada, the National Assembly amended the law to schedule Labor day on the first Monday in May. This was officially intended to encourage travel and rest, but it was likely also intended to distance Menghe from the labor-oriented variety of socialism in Maverica and Innominada, now rivals.

National Week
National Week, also known as Golden Week, is a new combined public holiday which was announced in 2014 and implemented starting in 2016. It combines three important national holidays: July 27th, the anniversary of the Communist-Nationalist victory in the Menghean War of Liberation; July 28th, the new date for Memorial Day; and August 2nd, the anniversary of the formation of the Federative Republic of Menghe in 1901. Altogether, this results in a period of 7 public holidays, starting on the 27th and ending on the 2nd.

Mid-Autumn Festival
Unlike the tomb sweeping and dragon boat festivals, the mid-autumn festival in Menghe is still observed on the 15th day of the 8th lunar month. This ensures that the festival takes place during an evening with a full moon, as many customs woven into the festival revolve around the full moon and the lunar cycle. Adjacent days are not taken off, nor is a separate day off created when the full moon falls on a Saturday or Sunday. Instead of traveling home, people are encouraged to celebrate this holiday together with their friends, neighbors, and co-workers.

Yusin Week
Yusin Week, also known as Silver Week, is the name for a long public holiday which combines two individual holidays: the Dongji festival, held on the winter solstice (December 21, 22, or 23), and the anniversary of the Decembrist Revolution (December 21). Thus, it is meant to combine both the turnover to a period of steadily longer daylight hours, and the reformation or rejuvenation of Menghe through Choe Sŭng-min's rise to power. A total of five public holidays are allocated for this festival. If Dongji falls on a Saturday, the preceding five workdays become public holidays; if it falls on any other day, the following five workdays (or the work week including Dongji itself) become public holidays. The one exception is for years when Dongji falls on a Saturday which is the 23rd, such that December 21st is a Friday; on these weeks, that Friday takes on a Sunday work schedule, and the Sunday after the holiday takes on a Friday work schedule. As with the tomb-sweeping festival, if Dongji falls on a weekend, companies which normally perform weekend work must treat Dongji and the preceding or following day as public holidays.

The term "island days" refers to single or double weekdays which are sandwiched between a public holiday and a weekend, which sometimes occurs for the Spring Festival, Mid-Autumn Festival, and National Week. For example, in 2018 Golden Week ended on a Thursday, leaving Friday, August 3rd as a lone workday between the end of the holiday and the next vacation. Likewise, if the Lunar New Year falls on a Wednesday, then Monday and Friday of that week will both be "island days" - though this has not happened since the holiday law was revised and it will not happen again until 2028.

Official Menghean policy holds that island days are not officially public holidays, but private businesses are encouraged to treat them as such. Workers may also use accumulated vacation days to take off island days, turning a 3-day break between weekends into a continuous 9-day break. Companies also have the option of turning an island Friday into a day off, but requiring employees to come to work on the following Sunday to make up for lost time. All of these solutions help stagger out travel dates around the ends of the break period, reducing the strain on the country's transportation infrastructure.

All of the traditional festivals listed above are significant only in Meng culture. They exclude religious holidays important among other regional minority groups, particularly those practicing Shahidism. Menghe's six semi-autonomous provinces all have the constitutional authority to set their own festival holidays, though they must respect the same set of core national holidays.

The Daryz, Lakkien, and Argentan Semi-Autonomous Provinces all observe public holidays around Eid al-Adha and Eid al-Fitr, the two most important holidays in Shahidism. These holidays are based on the Shahidic lunar calendar. As in the rest of the country, the dates are calculated two years in advance and published at the start of the preceding year. As with the Meng lunar new year, these festivals are important days for returning home and spending time with relatives, so each one has a three-day holiday period falling around it. This also results in a total of six cultural holiday days, the same number as in Meng-majority provinces.

The Dzungar and Ketchvan Semi-Autonomous Provinces observe a three-day public holiday around Tsagaan Sar, the Dzungar lunar new year. Because the Dzungar lunisolar calendar is slightly different from the lunisolar calendar of the Meng, this public holiday often falls on a different day from the Menghean New Year. The Dzungar SAP originally observed Naadam on July 29 through 31st, making it the first Menghean province to create a de-facto Golden Week. Since 2015, when Golden Week's nationwide rollout rendered the Naadam holiday redundant, there has been some local debate on whether to move the Naadam festival to a different set of dates or select three smaller Dzungar holidays to observe. So far there has been no change on either front, and the Dzungar and Ketchvan SAPs both have three fewer public holidays per year than the rest of the country.

Because the Kungnai people never converted to Shahidism in large numbers, the Kungnai SAP has its own set of holidays as well. The most important is the Kungnai New Year, which is based on the lunar calendar but falls in late November or early December. The other two Kungnai public holidays are the Ball Festival, held on the third Friday in March, and the Day of Honoring Ancestors, held on the third Saturday in June with the preceding Friday a public holiday.

Extended holiday periods exist to allow workers time to travel home and see their extended families, an important tradition in Menghean culture. Over the course of the Menghean economic miracle, millions of rural working-age men and women left their home villages to find work in the cities, and only return home during extended holidays. Menghe's passenger rail system was specifically designed to handle the elevated volume of travelers before and after important family holidays.

On nationally significant holidays (Victory Day, Memorial Day, National Day, and Revolution Day), citizens are encouraged to fly the national flag outside their houses as a show of patriotism. The strictness of "encouragement" has varied over the course of the 20th century; during the Pan-Septentrion War, flying the national flag on patriotic holidays was made compulsory, and during the Disciplined Society Campaign of the mid-1990s overzealous Party officials subjected noncompliant households to public criticism.

Today, failure to fly the flag on these days is not punishable by legal action, but may be met with social criticism from one's peers. In rural counties, teams of Youth Vanguard and Joguk Janyŏ still circulate during national holidays to "investigate" any houses not flying the national flag and distribute flags from their own supply, but this is rare in urban areas. As an alternative or supplement to the national flag, especially patriotic citizens may display the portrait of Choe Sŭng-min or the flag of the Greater Menghean Empire, depending on the nature of the holiday.