Revision as of 17:13, 10 January 2022 by Kakletron (talk | contribs)
(diff) ← Older revision | Latest revision (diff) | Newer revision → (diff)
Jump to navigation Jump to search
This Estmerish surname is barrelled, being made up of multiple names. It should be written as Wilton-Smyth, not Smyth.

Reginald Louis Wilton-Smyth (born 3 March 1944) is an Estmerish politician and economist who served as Prime Minister of Estmere and Leader of the Sotirian Democratic Union from 2018 to 2021. He also served as the Leader of the Opposition from 3 June 2021 to 22 November 2021. He also previously served as Transport Secretary from 2016 to 2018, and as Chief Secretary to the Treasury from 2013 to 2016. He is the Member of Parliament for Newchurch and Harrendole. He has been described as a right-wing populist, but identifies as a classical liberal. Since January 2022, he has been President and CEO of the Veritas Institute.

Wilton-Smyth was born in Wimney to Flurian parents from the influential Wilton-Smyth family. He studied at Univeristy of Damesbridge, graduating from King Richard's College in 1966 with a Bachelor of Science in Economics. After graduating he completed his national service, serving as part of the 2nd Flurian Rifles regiment of the Estmerish Army. In 1971 he then completed a Master of Science degree in Advanced Economic Policy at his alma mater. He secured a job with the Bank of Estmere after attaining his Master's degree, and worked at the Bank as a junior advisor from 1973. In 1978 he was headhunted by Isaac Mosset, and began working for the federal government as a senior advisor. From 1980 to 1987 he worked as a financial advisor in the private sector.

Wilton-Smyth was elected to succeed Richard Graham in the 2018 leadership election, and became Leader of the SDU and Prime Minister. His tenure was controversial, marked by a rightwards shift of the SDU, embracing right-wing populist policies, emulating the NKP and the Tribunes. His foreign policy direction was described as neoconservative. He led his party to victory in the 2018 snap election, continuing his coalition with the Reform Party, but the aftermath missing pensions scandal dented public support for his government, and he lost the 2021 general election. He was succeeded as party leader by Tristan Gardner.

He then attended the prestigious University of Damesbridge, where he was accepted into King Richard's College, coincidentally the alma mater of his grandfather. He focused his studies at Damesbridge on Economics, and concerned himself with the economic consensus that had settled across Euclea at the time. In his writings, he criticised the dominant Knowlesby school of thought, instead arguing that manipulation of the monetary supply should be core to modern economic theory. At University Wilton-Smyth was not particularly active in politics, though he was a member of a number of social societies.

Wilton-Smyth hoped to be deployed to an active front - Estmere was involved in the ongoing Siamat War at the time, and the Rahelian War had begun a few years prior to his conscription - but his regiment was instead assigned to the Estmerish Army of the Reine as part of the ongoing policing and peacekeeping mission in Gaullica. It has been suspected that this was arranged through his family's influence. Wilton-Smyth completed his national service in 1969.

After returning from national service, Wilton-Smyth returned to the University of Damesbridge, graduating with a Master of Science degree in Advanced Economic Policy in 1971. 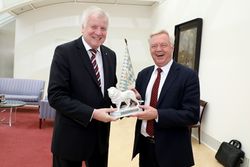 Wilton-Smyth married his first wife, Margaret Palmerstone, in 1972 after completing his national service. They met while Wilton-Smyth was studying at University of Damesbridge, and became engaged before he was conscripted. The couple had two children, and divorced in 2002, citing irreconcilable differences. It is claimed by Palmerstone that Wilton-Smyth was engaged in a relationship with his secretary in the last years of their marriage, though Wilton-Smyth denies this.