Difference between revisions of "Rohidianism" 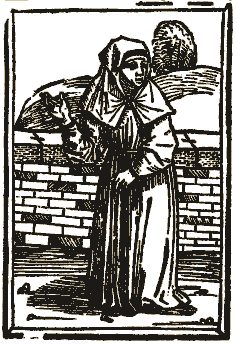 A drawing of a female Rohidian follower from the book Alydian Heresies, printed in Bicêtre in 1421.

The ideals spread of Rohidianism were fairly consistent from region to region. Rohidianism taught ideas of ascetism as well as striving to reach literal perfection in the eyes of God. They believe that God is one single form and that the idea of eight consubstantial deities is practicing polytheism. The Caudex was also edited by Rohidians due to disagreement with the legitimacy and teachings of certain texts. Rohidians were famous for their practice self-punishment, such as lashing, which was believed to help brand the fear and hatred towards sin, causing them to become closer to the freeing of sin. They also practice the teaching of Purification, which is the process of being burned on the wrists and bathed in water that is considered blessed. Most people are only given the Purification ritual when they are about to die or are considered perfect in the eyes of the Rohidians. This process literally meas that said person has been purified under God's wishes or reached the perfection that God wants from mankind. Those who do not reach perfection in the eyes of God or receive the Purification ritual will have their spirit suffer eternal damnation.

Beginning in 1156, Pontiff Alexander III attempted to convert Rohidians as well as arrest any outspoken leaders in the eastern Foranic kingdom of Lletwyr with the help of the Society of Saint Austol. Alydian apologists were not at all successful in attempting to convert Rohidians away from there heretical faith. Even the famous Saint Emyr was unable to convince the Rohidians, many simply forced him out of towns and counties controlled by Rohidians and even burned his writings. Despite events such as the Miracle of Cemaes, Rohidians simply ignored and even violently resisted these legates.

After the Council of Arddlech, the strategy against the Rohidian faith began to become even more violent, to the point that many people who were followers or teachers were publicly executed, arrested, and even lost their lands. In 1192, Pontiff Andrius II took the suppression movement a step further by helping fund nobility leaders to take lands and banish anyone who was proven to be a member of the Rohidian circle.

The issue finally exploded into full conflict after the death of Iestyn Craigwen, Bishop of Irfon. This led to Pontiff Virgo III to call the infamous Rohidian Crusade, leading to many Alydian nations to join the conflict to help rid of Rohidianism in eastern Wradhia as well as northwestern Cuirpthe.

In art and literature