Difference between revisions of "Svaldheim"

Svaldheim (Svaldish: Sväljdheim), officially the Republic of Svaldheim (Svaldish: Tjodvelden Sväljdheim), is a sovereign state in Hallania, comprising the northern half of the mainland and a number of small islands. It is surrounded by the Loekic Ocean, sharing its sole land border with Tuskval to the south. The 2018 census recorded a population of 11.9 million.

According to Svaldish oral tradition, Svaldheim was founded in 361, when the demi-god and culture hero Sönnungr married the Jötunn princess Dröfn and was crowned King of the Svalds, before ascending to Valhöll and achieving full godhood upon his death. His successors successfully integrated the Svedales and Alvers, before establishing the Kingdom of Alversvald in 780, which by 1011 had been superseded by the more powerful and successful Kingdom of Svaldheim.

Following successive conflicts with the rivalling Kingdom of Tuskval, the two crowns were united in 1655, when Gustav III became king of both nations. His successors would face opposition from Svaldish nobles as they attempted to centralise power in Rhinmond, though ultimately the monarchs would prevail and an absolute monarchy would emerge. Following the 1798 inheritance of Crethia, the crown's power stretched across the continent, and in 1812 the kingdoms would be merged into the Kingdom of Hallania. Under Imperial Hallania, Svaldheim would emerge as one of the leading locales of the industrial revolution, with Valhamn emerging as a key shipbuilding and manufacturing hub and the coal belt powering the nation.

In the aftermath of Hallania's defeat in the Continental War, Svaldish separatists would emerge as a prominent movement, with the Hallanic Wars seeing the kingdom splinter, with Svaldheim achieving independence. The period also saw conflict within the country; between reds, greens and whites. Svaldheim would emerge ultimately as a republic, and following the brief Loose Ends War with Tuskval, peace would settle on the continent. Svaldheim would help to create the Hallanic Commonwealth and HALSAT in the 1960s, and begin to pursue a form of pan-Hallanism that opposed Tuskish hegemony.

Svaldheim is a federal parliamentary republic. The current President is Emil Lundell, while Klara Malström serves as the current Chancellor. The Svaldish economy is considered the primary example of longship democracy. Svaldheim has a nominal GDP per capita of $37,829. The capital and largest city is Valhamn, a major urban area with a population of just over a million. Svaldheim is a leading member of the Hallanic Commonwealth, and is also a member of the Assembly of Nations.

The exonym "Svaldheim" is a direct translation of the Svaldish endonym "Sväljdheim", which itself is derived from the Old Hallic "svälja" and "heimr", meaning the "Home of the Swallows". "Swallow" is believed to refer the spirit animal of an Alver tribe, the name given by one of the Old Hallic tribes migrating northwards. The first recorded use of Sväljaheimr is dated to the 450s, found in a passage of the Kungliglinje, while the first recorded use of the more modern Sväljdheim is dated to 1756, found in a royal decree from Viktoria I.

Union of the Crowns

Svaldheim is a federal republic, comprised of twelve constituent states.

The Port of Valhamn connects the Hallanic economy to the world.

Svaldheim can be described as the stereotypical longship democracy, maintaining a developed mixed economy, with high levels of public welfare. The Svaldish economy acts as a crucial pillar of the wider western economy. The country hosts lucrative shipbuilding, manufacturing, services, energy and technology sectors. Svaldish transport infrastructure is highly integrated with the other Hallanic countries, with the Port of Valhamn acting as the primary entry point to western markets for Aussian international trade. Svaldheim is characterised by a well-trained and productive workforce, high exports per capita and sizable public investment. Additionally, the National Economic Council, which represents trade unions and corporate bodies, aids the government in coordinating social dialogue.

Svaldish GDP per capita is $37,829, with a total nominal GDP of $453.19 billion. The country ranks highly in income equality, human development and workers' rights. The workforce is highly educated, with Svaldheim maintaining the second highest level of tertiary education in the world. The economy is also considered highly innovative. The country maintains a high minimum wage, which can be partially attributed to higher than average union membership in the country, with union density at 63%. Co-operatives of all stripes are more common than the global average, with many companies run as co-ops, in part due to government incentives. 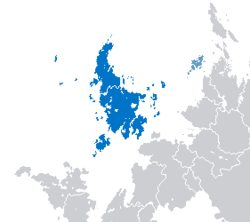 Svaldheim was one of the centres of the western industrial revolution, with the region seeing the rapid development of strong manufacturing, steelmaking and mining industries alongside the growth of the more traditional shipbuilding industry. As part of the Kingdom of Hallania, Svaldheim contributed to that nation's political and economic advancement, and was colloquially known as "the Hallic engine". In addition to this, Valhamn grew into Hallania's second largest port, and thrived on trans-oceanic trade with the wider world. Hallania remained the most industrialised nation from 1820 to 1901, and Svaldheim remained the nation's most productive region.

The aftermath of the Continental War saw the breakup of Hallania, and Svaldish independence saw a marked increase in trade union activity, who came to dominate the nascent republic, leading to the establishment of a social democracy. Successive governments oversaw the expansion of the welfare state, the introduction of public healthcare and greater government involvement in the economy. Economic crashes in the 70s and 80s, combined with high levels of public spending and spend-focused macroeconomic policies saw the growth of public debt, until budget balances in 1994 and 2015. Debt interest comprises 15.1% of 2019 government spending. 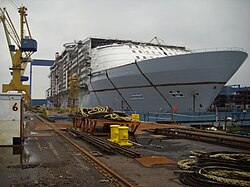 Svaldheim is a founding member of the Hallanic Commonwealth, and participates in the Hallanic Single Market. In addition to this, the Svaldish daler is pegged to the other Hallanic currencies via the Commonwealth's fixed exchange rate mechanism. Svaldheim's membership of the EC has led to a close integration with the other Hallanic economies, furthering Svaldish economic specialisation in port infrastructure.

Since the 1960s, the service industry has emerged as a significant sector of the Svaldish economy, though the nation's industrial base remains significant. The financial sector remains small compared to neighbours, though Valhamn has emerged as a financial centre. Privatisation was pursued during the 1980s, though a number of significant industries remain nationalised; including Svaldish Gas, Svaldish Shipbuilders, Svaldheim Steel and the Valhamn Port Authority. Government investment in the economy remains widespread outside of nationalised industries, with significant business and technology grants, infrastructure spending and farming subsidies.

As with the rest of Hallania, Svaldheim is historically a Dísitrú nation. Prior to the establishment of the republic in 1916, Dísitrú, in the form of the Damentrú tradition, was considered the state religion. The new republic enacted a policy of official secularism and religious freedom, leading to the disestablishment of the church and the end of widespread government involvement in religion.

Modern Svaldheim is a secular, religiously diverse nation, though Dísitrú retains the largest number of adherents. The historical and cultural legacy of Dísitrú is also prominent, having influenced the legal system, government and culture of the nation. The Sennleið tradition first appeared in Svaldheim in early middle ages, emerging from Old Hallic paganism similarly as in the rest of Hallania.

Following the Damen Reformation the 12th century, Damentrú quickly emerged as the primary Dísitrú tradition in the country, surpassing the opposing Týrinntrú tradition and smaller branches. Despite this, other traditions did not entirely disappear, and some smaller traditions managed to flourish. Frelsuntrú later emerged as a significant minor sect, particularly among the working class.

According to the 2018 census, 57.2% of the population belong to one of the Dísitrú traditions. Most followers of Dísitrú adhere to the Damentrú tradition, while a smaller proportion belong to Týrinntrú or to other smaller denominations, such as Frelsuntrú.

Irreligion is widespread in the country, particularly in urban areas, with 36.6% of the population in 2018 declaring to have no religion.

Other religions also maintain a presence in the country, with Ditanery, Taido and Marism all recorded on the 2018 census, primarily among minority ethnic groups and in migrant communities. Ditanery has had a presence in the country since the middle ages, generally practiced by Erdaran merchants, while Taido appeared only more recently, largely as a result of migration from the Tuskish territory of Kyuko.

The semi-mythical king, culture hero and demi-god Sönnungr is considered the patron deity of Svaldheim; his symbolic trident is included on a number of national symbols, most prominently the coat of arms and the logos of national sports teams.