"The World Game" is a famous card game created by Katharine Walker in the 1950s, with intentions of the game being used in school systems around the world. The World Game is based on comparing facts between countries, where the highest fact wins. However, to make the game interesting, there are some challenges that can be called. You are asked to guess the flag, show the location of a country on the map or name the capital city of a country. The game is award-winning and wildly popular due to it's easy to learn rules as well as portability.

The game was created in 1954, by a geography teacher named Katharine Walker who used it to teach her class basic geography which she believed many students were not aware of. She made the original game using pieces of card and drawing the flags as well as statistics for the countries she found using old books. The game spread and she eventually worked with Pasbro Entertainment to publish the game properly in 1959, in it's first form.

Since then, the game has gone on to be the 17th most sold card game by numbers as of 2021.

Rules and How to Play 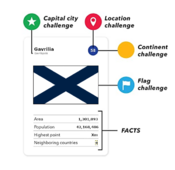 The layout of a card.

In the game, each player is handed out 20 cards each to begin the game. Each card has four stats on it, being population, total area (km2), highest point and amount of neighbouring countries a card has. The game begins left of the dealer, where the player who begins reveals their card and can either place the card down in hope that the stat they chose is the best or alternately pick a challenge from an opposing player. If they do not, and the player choses to put their card in the middle they must choose one of the four categories, usually whichever is the best on their particular card.

Once all the players have placed their cards down, whoever has the highest score in the chosen stat wins all the cards.

If a player chooses to pick a challenge, the person they challenge has an option of four separate things. They can challenge the challenger at their cards capital city, flag, location on the world map (given with the game) or continent. Each of the options are given different difficulty ratings. If the challenger fails to get the answer correct, you get their card.

Some people, when making decisions in the game, may want to follow the original Official Game Guide written by Katharine Walker upon the making of the game. The guide states that, when placing a card, the best chance of winning is when you have the following stats:

According to this guide, the most viable and powerful nations in the game would include Prybourne, Prei Meas, Moldanovica, Aziallis and Riamo.