At various points in its history, the region has been inhabited by diverse civilizations including the Larsams, Artics, Demiscians, Solarians, Rahelians, and Dens. Solarianisation started after the conquest of the area in x BC by the Solarian Republic and continued into the Imperial and Verliquioan eras. Tsabara was a site for the Tagamic migrations and after conquering the land from the Solarians, soon fell to Solarian-Irfanic invasion. It became a cultural and religious centre for the Irfanic faith following the conquest of the region by the First Heavenly Dominion Portions of its coast would shift between hands between the states left in the wake of a unified Irfanic empire and Euclean attempts to retake the 'Holy Land.'

In 18xx, a diplomatic incident and subsequent invasion put the country under the control of the Gaullica. After a failed uprising several years later the Khalji Sultan was deposed and the area formally annexed into Gaullica. During this period Gaullica encouraged immigration of its Atudite minority as well as Gaullicans, who later became known as Drapeuntes. The construction of the Adunis-Abirabe railway was started in Tsabara and considered the top-priority of the colonial regime. Following the Great War’s end in 1936, Tsabara became independent republic after a short mandate period under Estmere, though the Drapeuntes-Atudite led government collapsed following the Solarian War and a socialist republic was formed in 1948. It transitioned to democracy in 1986 after popular protests, with the creation of a confessionalist democratic system. However, in 2016, the country was reformed into a presidential republic under Atwan Al-Tughluq, who has since eroded the multi-faith system toward Rahelian-Irfanic dominance.

Tsabara is a regional and middle power. It supplies large amounts of natural gas to Euclea, while energy exports and manufactured goods are the backbone of the economy. According to the CN, Tsabara is one of the most unequal societies in the world, with high levels of unequal economic development between the coastal regions and arid interior. Tsabara is a member of the Community of Nations, GIFA, NAC, Aurean Forum and the ITO.

Heavenly Dominion and the Crusades

Tsabara is a federal constitutional republic and representative democracy. The government is regulated by a system of checks and balances defined by the Constitution of Tsabara, the country's supreme legal document. The Tsabaran government is divided into three branches:

The Legislative branch consists of the bicameral Grand Assembly, made up of the Senate and National Assembly, which makes federal law, declares war and peace, approves treaties and has the power of the purse and of impeachment, by which it can remove sitting members of the government. The National Assembly represents the people and has 288 voting members elected to a four-year term. Seats are apportioned among the provinces by population every tenth year. As of 2014 ten provinces have just five deputies while the Adunis Province, being the most populous one, has 40. The Senate represents the provinces, has 80 members elected at-large to four-year terms, with each province having four seats; the Senate is elected concurrently to the National Assembly.

The executive branch - the President is the commander-in-chief of the military, can veto legislative bills before they become law—subject to Assembly override—and appoints the members of the Cabinet and other officers, who administer and enforce federal laws and policies. The President is elected directly by the vote of the people, serves a four-year term and may be elected to office for unlimited number of terms. The president is aided by the Premier of Tsabara, who is charged with overseeing and coordinating the work of other ministers and representing the president before the National Assembly.

The Judicial branch includes the Supreme Court and lower federal courts interpret laws and overturn those they find unconstitutional. The judicial branch is nominally independent of the executive and the legislative branches. The Supreme Court has eleven members appointed by the President—subject to Senate approval—who serve for life. The lower courts' judges are proposed by the Council of Magistrates (a secretariat composed of representatives of judges, lawyers, researchers, the Executive and the Legislative), and appointed by the President on Senate approval.

Tsabara is divided into twenty provinces (Atudite: מָחוֹז Machoz; مِنْطَقة Rahelian: مُديريّة; Muhafadhah). The provinces are in turn divided into districts Atudite: מחוזות‎; mahoz; مِنْطَقة Rahelian: مِنْطَقة; Minṭaqa), with the number of sub-unit districts differing per province. As a federation, each province is entitled to the power that they chose not to delegate to the federal government; they must be representative republics and must not contradict the Constitution. Beyond this they are fully autonomous: they enact their own constitutions, freely organize their local governments, and own and manage their natural and financial resources. Some provinces have bicameral legislatures, while others have unicameral ones.

With the exception of Adunis, Sambarat and Bedjene provinces, the provinces of Tsabara fall along ethno-sectarian lines, with their boundaries defined by historic limits or natural barriers, such as highlands and rivers. This has led to many provinces becoming more defined by their ethno-sectarian identity than by their national Tsabaran one. Efforts to amend provincial boundries to promote cohabitation have constitently failed. 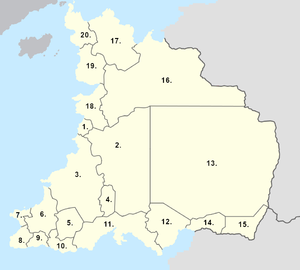 The Tsabaran Federal Armed Forces forms the nation’s military and consists of the Federal Army, Federal Air Force, Federal Navy and the Federal Reserve Forces. As of 2018, it had 1,257,000 active personnel and 2,000,000 reservists. It is one of the largest militaries in the world and the largest in Bahia. The military is overseen by the Federal Security Council, with the president as the chair and commander-in-chief. The overall command for the armed forces is the National Chiefs of Staff.

Besides the federal army, each of the twenty provinces have a Federal Reserve Force, which operates as a national guard. During peacetime their command and supply is managed by their respective provincial government. During war time the FRFs are brought under the regular army’s command.

From 1986 until 2017, the military was a volunteer-professional force, however, conscription was reinstated by President Atwan al-Tughluq. Many analysts and commentators have noted that the return of conscription has led to the military being degraded in capability, bloated and divided along ethno-sectarian lines, with both Atudite and Rahelian exclusive units.

Throughout much of its history post-independence, the Federal Armed Forces have relied upon imports of equipment from the Collectivist bloc. However, since 2005, efforts have been made to modernise, with the purchase of equipment and systems from Gaullica, Estmere, Werania and Nuxania. These include new land-based systems, such as tanks, armoured vehicles, firearms and aircraft. Modernisation has been criticised as “poorly administrated” and based on officer patronage.

Tsabara extends over 1,563,484 km2 (603,665 sq mi), making it the Xth largest nation in the world by size. Tsabara is bound to the north by the Gulf of Assionaire, the west by the Solarian Sea, where it shares maritime borders with Auratia and Montecara, the south by Zorasan and the Solarian Sea.

Due to its size, Tsabara hosts several distinct climates, though it is mostly extremely dry and desertlike in nature. However, the coastal regions enjoy a milder Solarian climate. Natural hazards come in the form of hot, dry, dust-laden sirocco (known in Tsabara as the gibli). This is a southern wind blowing from one to four days in spring and autumn. There are also dust storms and sandstorms. Oases can also be found scattered throughout central Tsabara. This dry desert is known as the Rissani, which shares a boundary with the al-Ramal al-Wusta Desert to the south in Zorasan. 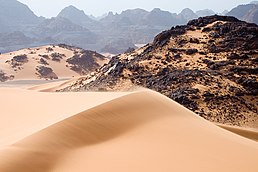 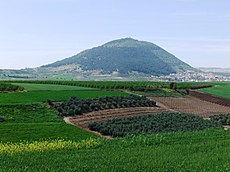 The population of Tsabara was estimated to be 59,115,236 in 2018; Much of Tsabara is defined by its near even split between the Rahelian and Atudite ethnic groups, though a large number of smaller minority groups are present. While at first glance, this ethnic, linguistic, religious and denominational diversity might seem to cause civil and political unrest, "for much of Tsabara’s history this multitudinous diversity of religious communities has coexisted with little conflict". However, since the return of democracy in 1985, there has been steadily growing tensions between the various ethno-sectarian groups, culminating recently in the Tsabaran Crisis.

Under the Communalist regime, the census removed ethnic definitions and instead introduced Tsabaran as a panethnic classification. Between 1977 and 2004 almost 98% of respondents classified their ethnicity as Tsabaran, however the 2014 census saw this fall to 33%, with 67% classifiyng themselves as "other."

Although boasting a multi-ethnic society, much of the country's ethnic groups are concentrated in separate areas of the country. For instance, almost 85% of the Atudite population live in the south-western corner, in what is known as Greater Masara. The Rahelian population dominates the centre, north, east and south-west of the country. The Suhalan population is found in the north-east, while the Syriazi and Druze reside in enclaves within the Rahelian south-east. The Öroqic are found in the southern coastal areas, dividing Greater Masara from the Rahelian south-east, the Drapeuntes dominate north-western Tsabara, but have migrated in great numbers to Greater Masara or to the Adunis metropolitan area. This led to the emergence of the Three Tsabaras, in which Greater Masara, Rahelian Tsabara and the Minority Enclaves have distinct cultural and religious traditions, great disparities in economic development and entrenched political geography.

Tsabara has three official languages: Rahelian, Atudite and Gaullican. Gaullican is the official language of government owing to its neutral nature between the Atudites and Rahelians. However, since 2010, Rahelian has been increasingly used on documents and papers by the government. Rahelian and Atudite are the two most common languages spoken, with the Syriazi minorities relying on Rahelian for everyday communication.

No minority languages have been recognised by the federal government since 1977, with schools teaching pupils from the ages of five and above Rahelian, Atudite and Gaullican, though secondary education does offer courses in Suhalan and Syriazi. A significant segment of the Rahelian population speaks Pardarian owing to its religious importance in Irfan; it is also spoken by the large Zorasani community in Adunis.

Tsabara comprises a major part of the Holy Land, a region of significant importance to all Abrahamic religions – Atudism, Sotirianity, Irfan and Druze.

Making up 46% of the population, Irfani make up the largest religious group in Tsabara. The origins of Irfan in Tsabara lay with the First Heavenly Dominion that brought the faith between 800 and 832 CE. The Irfani population itself is dominated by the Hasawi sect with 55% of Irfani, while the Arta sect stands at 45%. In recent years, the birthrate of Arta Irfani has exceeded that of Hasawi. 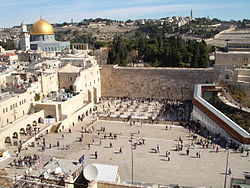 The Shrine of Ascension and the Western Wall in central Adunis.

Atudites constitute the second largest religious group, with 36% of Atudites identifying with the religion. 1% of ethnically registered Atudites are Atheist or Agnostic. The religious affiliation of Tsabaran Atudites varies widely: a social survey from 2016 made by Globus Research indicates that 44% self-identify as Hiloni (secular), 22% as Masorti (traditional), 18% as Dati (religious) and 16% as Haredi (ultra-Orthodox).

At 5.5%, Sotirianity is the third largest religious group. Most of its adherents are ethnically recorded as Drapeuntes or converted Öroqic and Rahelian Sotirians. The Sotirians are mostly found in the region of Adunis, the Öroqic Coast and the Porte Peninsula in the north. At 0.96% the Druze are the smallest religious group in Tsabara and confined mostly around Jabal al-Druze near the Devil's Teeth in the south-east.

Retrieved from "https://iiwiki.us/mediawiki/index.php?title=Tsabara&oldid=271192"
Categories:
Hidden categories:
This page was last edited on 3 November 2020, at 14:01.
Privacy policy
About IIWiki
Disclaimers