Difference between revisions of "University of Aldesey"

It is built upon two large natural islands in the River Lither, Upper and Lower Eyote, which have over the centuries has been nearly fully covered by the buildings of the university, with the town of Aldesey developing on the banks of the river.

The River Lither at Dumcourt Bridge.

The University as a body is distinct from its sixteen constituent colleges. Each of the sixteen colleges are independent and responsible for the lodging, education and nourishment of its students. Students are admitted to a college through the process of Matriculation, when they formally become members of the University. Henceforth, they are bound by the University's statutes and regulations. For example, students, when in public, are required to at all times wear the gowns of their status. The University's statutes, regulations and ordinances are enforced by the University's Proctors, police, and student beadles, who have the power to fine and confine, and in extreme cases, to rusticate or ban (expel).

The formal council body of the University is known as the Great Congregation, comprised of all masters of the University, who are those students with a Master of Arts or were otherwise a Doctor of Letters, Science, Music, Laws, Physic or Divinity. It is considered the sovereign body of the University. It has a role in determining University's statutes and regulations, subject to the assent of the Chancellour, as well as academic matters such as examinations, rustication, matriculation, the curriculum and lectures, as well as granting graces, dispensations and degrees.

The Congregation, with its large size, meets normally every three years, and delegates its powers to the smaller Minor Congregation, or Convocation of Regent Masters, who have power over academic matters, however cannot pass statutes. Statutes are deliberated upon by the Convocation, and if agreed to, referred back to the entire Congregation, which can accept it or reject it at the triennial meetings or by postal ballots.

As with the other two Erbonian universities, the University of Aldesey retains the four faculties of the mediaeval university tradition, being the Faculties of Arts, Physic, Laws and Divinity. Since the reforms of the 18th century, each faculty is more relevant to their respective professions—the sciences and humanities, the practice of medicine and law, and of holy orders respectively—than the more wholly academic approach favoured thitherto.

All students enter the university in the Faculty of Arts, excepting monks and friars who are admitted straight into the Faculty of Divinity. The form and curriculum for the Bachelor and Master of Arts is explained hereinafter.

Bachelor and Master of Arts

The Bachelor of Arts (B.A.) degree is the only undergraduate degree awarded by the University of Aldesey. The Bachelor of Arts is awarded after the necessary Responsiones and nowdays, a subsequent Determinationes, which is taken in the student's sixth term during Lent at the end of the second year. Responsiones are a short oral viva voce examination de quaestione respondens before a panel of masters, who vote whether to permit the student to determine. Responsions are taken at the end of the first year. Provided that the necessary course-work is completed, this given pro forma. The determinations themselves involve written examinations, which were introduced in the 19th century, and an oral viva voce disputation. Upon completion, the student may 'sue' for his 'Bachelor of Arts'[1]

The Master of Arts (M.A.) is the degree taken by some students upon attaining the Bachelor of Arts. The bachelor will typically complete his studies for the M.A. within one year. He will be presented to his masters, who cast a vote de scientia et moribus. The Licentiate examinations are then taken under the authority of the Chancellour of the University, the Bishop of Chepingstow (who also happens to be the Lord High Chancellour) along with three Quodlibetica disputations. After these, worthy candidates are conferred the licentia docendi and take an oath inter alia to incept within five years, thereby becoming a 'Licentiate of Arts'.

Historically the Master of Arts took a seven years to attain in residence (“twenty-one terms after Matriculation”). By the 19th century, the Bachelor of Arts only took two years to attain and the Master of Arts another year of study for all students. Despite this, inception still only occurs a minimum of three years after Quodlibetica, at the end of what would be student's sixth year (and indeed, is in the case of students in higher faculties). On the day before Inceptio, the licentiate takes part in a disputation known as 'Vesperies'. At Inceptio the licentiate formally becomes a 'Master of Arts', on which day he gives a brief lecture known as his Principium.

The curriculum for the Bachelor and Master of Arts at the University of Aldesey involves attendance at lectures and participation in disputations and declamations. Most lectures run over a course of two or three terms, but some are only for one term.

The curriculum for the Master of Arts is not entirely fixed, and students are permitted to choose which lectures they wish to take out of the provided subjects in each of the three fields of Philosophy, Natural Sciences and Mathematics. This is similar to the concept of a 'major' or 'minor' at other universities.

For the Bachelor and Master of Arts, teaching is in the form of lectures taken by regent masters, supplemented with weekly disputations (debates) declamations (essays). Ordinary lectures for undergraduates and bachelors are given by regent masters and involve exposition and instruction of the subject matter, as well as questions and discussion. Cursory lectures are given by bachelors to undergraduates and resemble lectures insofar as no questions are taken and the material is presented as is.

Students at the University of Aldesey are either undergraduates, bachelors or masters. Undergraduates are graded into five ranks: noblemen; gentlemen; commoners; battelers; and servitors. Most colleges have abolished servitors, however some still retain the rank. Different ranks of undergraduates are entitled to different academic gowns and hats which mark their status. Students are required to wear the gown of their status whenever they are in public, unless otherwise dispensed with or engaging in exempted activities (such as physical exercise).

The academic dress of a Master of Arts sans cap. Note the hood has slipped.

Teaching in all four universities is undertaken by the regent masters, doctors and professours of the University.

After incepting as a Master of Arts, a person is by statute required to lecture at the University as a magister regens for a minimum of two years, as well as determine weekly for one term. Nearly all regent masters have a post-graduate degree either in the Faculty of Arts or in a higher faculty, given the required six years before inception. The duties of a regent master include delivering lectures to undergraduate students, determining, attending Convocation, looking after students, and otherwise assisting with the peace and good order of the University. Though regency is theoretically required of all bachelors incepting as masters, it is generally dispensed with unless the master wishes to teach.

A doctor is a master who possesses a doctorate in a faculty. They have the responsibility of teaching those reading for a doctorate, or a bachelor's degree in the higher faculties.

All regent masters and doctors of the University are also attached to a college and are known as fellows. They form the governing body of a college, under their warden, master &c.

A professour is a fellow who has been given a chair in a specific field by a college or the University or, in the case of Professours Regius, by the Crown. They are required to deliver a certain number of lectures annually. 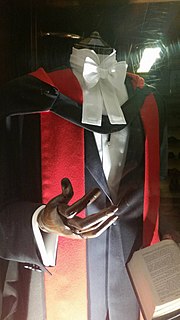 The academic gown of a Doctor of Letters.

A student after gaining his licentia, is able to declare his intention to study in the higher faculties. He then will begin a course of study in the higher faculty for three years, making a total of six years of study. Given that the Master of Arts is granted after licensing six years after Matriculation, the student may thus gain his higher bachelor's degree shortly after he incepts as Master of Arts.

There is a widely prevailing idea that education at University should be for academic and scholastic purposes only, and not necessarily to provide a means of gaining professional skills. Despite this, a bachelor degree in laws, physic and divinity are normally needed for admission into the specific professions of a barrister, physician and clergyman respectively. Furthermore, doctors of the civil courts of course must read for the Doctorate of Laws and bishops generally require a Doctorate of Divinity.

Further study in the Faculty of Arts is also possible, with there being a split between the 'letters' school, the music school, and the science school. Each school is split into a number of different fields.

Before admission to any degree, a student is required to partake in several examinations, not all of which are academically relevant. For the progression of an artist to the grade of Master of Arts, the following examinations are required:

The first examination is the Matriculation examinations, which is an exam taken before matriculation to prove scholastic competence. It serves as the culmination of the sixth forms of senior school and is generally an examination of competence in Latin in written form as well as general capability in the English and Greek tongues. It is not compulsory, and colleges may admit students at their discretion. All students must be ordained as clerks before matriculation, though this may be waived, usually for international students.

The second examination is taken at the end of the first year, and is known as the Responsiones. An undergraduate must satisfy three regent masters of his choice, de questione respondens in a public viva voce question-and-answer format in Latin, on the topics covered. This has generally become a formality, and the questions asked often come from books of Responsion questions and their prescribed answers. Upon completion, the regent masters vote de scientia et moribus whether to permit the student to determine.

The final examination for the Bachelor of Arts degree is the Determinationes. It has two parts, one being a public debate or disputation on a matter in Latin, and the latter being a written examination in English. The public debate is between two undergraduate students and is generally a formality.

After the set number of years, the bachelor's final 'examination' is a disputation in Vesperiis, known as the 'Vesperies'. These are held in the afternoon and consist of disputations on various questions.