Difference between revisions of "User:Luziyca/Sandbox4"

Native Imaguans are a subgroup of the broader native Arucians.

The other commonly used term, Mutu, derives from the Imaguan word for people, and since the 1990s has been gaining in popularity, as many native Imaguans view the term "native Imaguan" as being derogatory, due to its historic associations with colonial rule.

It is believed by archaeologists and historians that native Imaguans came from the Kajapas region in what is now present-day Vilcasuamanas, with the ancestors of the native Imaguans arriving on present-day Imagua and the Assimas in the 700s CE, displacing the TBD people who inhabited the archipelago for centuries.

For the centuries preceding contact with the Eucleans, native Imaguans had extensive trade relations with their neighbours, with potatoes being the predominant crop, with potatoes and other crops from the islands often traded for precious metals like gold, which they fashioned into jewelry.

With the discovery of Imagua and the Assimas by Caldish explorers in the 1490s, native Imaguans made first contact with non-Asterians for the first time. According to Caldish explorer (TBD), who was the first person to land in present-day Cuanstad:

"...when we set foot on dry land, we were greeted with curiosity by the native inhabitants of the land. After exchanging some gifts with one another, it seemed like a friendly relationship was being developed, with the natives willing to take care of us."

Many of the surviving natives became hostile to Eucleans, especially as a result of the enslavement of many native Imaguans. 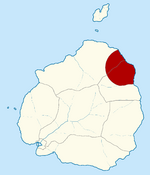 After Estmere seized the island of Imagua from Ordennya in 1658, pressures on the native Imaguans eased, especially as Estmere imported slaves from trade posts in present-day Rwizikuru, leading to the establishment of the current Bahio-Imaguan population on the islands.

By this point, virtually all of the native Imaguans resided along the northeastern slopes of Mount Apita in present-day Saint Fiacre's Parish. Thus, in 1662, Governor (TBD) ordered that "all remaining free natives be moved towards a section of land in Saint Fiacre's" in order for them to "preserve their traditions and culture," while banning Euclean settlers from owning land in that reserve, and prohibited Eucleans from attempting to enslave them.

In the Topuland Territory, a chief (Imaguan: ábuti) was appointed by the colonial governor from among the native Imaguan population, while checkpoints were established to prohibit natives from exiting the territory, while Eucleans were only allowed to travel through the territory with an armed escort, and were prohibited from settling the territory, or otherwise "disturbing their native culture."

Over the next century, enslaved natives were assimilated into the Bahio-Imaguan community, while those in the Topuland Territory were able to better preserve their culture. However, traditional religions faded out, as Bahrist, and later, Catholic missionaries spread to the Topuland Territory with the permission of the governor and the chief. During Gaullican rule of Imagua... (TBC)

After the reconquest of Imagua from Gaullica by Estmere in 1771, and the subsequent abolition of slavery, the freed native slaves were sent to the Topuland Territory. Thus, it was decided in 1751 to do a census of the "natives" living in Topuland. They found that there were 8,596 natives residing there, of which only 2,579, or around 30%, were "free natives," and the majority of the population, or 6,017 people, were former slaves.

With the influx of former slaves into Topuland, who were extensively influenced by the cultures of both their Euclean slavemasters and the Bahian slaves, tensions mounted between the two communities, as many native Imaguans feared that the "black Imaguans" would destroy their culture and prohibit them from living their traditional lifestyles.

This came to a head in 1783 when after the death of Chief Jehannin, the Estmerish authorities appointed Osmund Freeman, a freed native slave as chief. This appointment was seen as an insult to many native Imaguans, as Osmund Freeman "had more in common with the black inhabitants than with the natives."

This caused many prominent "free natives" to elect Darila as chief. However, Darila's election was rejected by the Estmerish authorities, who recognised Osmund Freeman as the legitimate chief of the Topuland Territory, which led to a rebellion led by Darila to force Estmere to recognize him as chief over Osmund Freeman.

However, the rebellion was not successful, as Darila's forces were all but destroyed at the Battle of Gurasu, due to superior numbers of Estmerish troops and colonial militias. Darila was forced to surrender, and he was executed. However, as a compromise, the Estmerish authorities agreed to permit "the freed native slaves" to live outside of the territory, so long as they "follow civilised customs." This allowed most of the former slaves to leave the Topuland Territory, which helped reduce tensions between the two groups.

In the nineteenth century, native Imaguan autonomy began to be eroded when in 1811, after the death of chief Osmund Freeman, the Estmerish government chose to appoint both a chief, Gurasu Brown, and a superintendent (Imaguan: ligeleina), Noble Thurman, with the superintendent's role to "civilise the natives" and to "prepare them for life in civilised society."

The appointment of a superintendent in addition to the chief weakened the role of the chief, as many of the superintendent's duties overlapped with those of the chief. While Brown attempted to defend his administrative responsibilities, Thurman argued that "natives lack the capacity to properly govern themselves," and thus needed a "civilised man" to govern the reserve.

Thus, over the next few decades, the powers of the chief diminished to purely a cultural role, while the superintendent's position grew, until by 1851, the superintendent received the prerogatives to "appoint chiefs."

In 1864, superintendent James McMillan issued a policy requiring that all "native children be educated in Euclean culture and Euclean customs, so that they may be able to function in a Euclean society." To this end, a school was established in Bellmare specifically "for the education of native children." When the chief criticised the distance of the school from the Topuland Territory, McMillan said that the distance was critical to ensure that "they be integrated into the mainstream society."

As well, under James McMillian's tenure as superintendent for the Topuland Territory, he urged that a census be done on the natives, and to only count those "whose fathers are natives," in order to ensure that "no man may fraudulently claim that they are native." The suggestion of a census under those lines were criticised by many natives, but the colonial government supported it, and approved a native census to be taken under McMillian's lines.

Thus, the 1871 census revealed there were only 2,521 natives on the island, of which 2,344 lived in the Topuland Territory. With the figure in hand, McMillian argued that "alienated sections of the Territory ought to be opened up for development by civilised men," especially those deemed "fertile lands." The following year, the governor instituted the Land Alienation Ordinance, which empowered the colonial authorities to take "alienated lands" away from the Topuland Territory, and to sell them to Imaguans.

When the Colony of Imagua was granted limited self-government by the Estmerish in 1892, native Imaguans did not have a say in government, as they were deemed "not ready" for the responsibilities of citizenship. However, as the assimilationist policies took hold, the Topuland Territory was granted a territorial council (Imaguan: damuriguaü) in 1904, comprising of three elected officials, and six officials appointed by the superintendent.

However, real power still lay within the hands of the superintendent, although as the natives were "trusted" with more and more powers, the superintendent's powers were reduced: by 1948, the last superintendent, Gilbert Charrier said that "the natives in the territory have developed to such a point that there is no longer any need for any special rights or privileges," and argued that the continued existence of the Topuland Territory was "inherently discriminatory."

Thus, in 1949, the Native Integration Act passed both chambers of Parliament, and was signed into law by President Lionel Hegan, which transformed the Topuland Territory into the village of Topuland, granted all native Imaguans citizenship, and "terminated" all special rights and arrangements, with immediate effect. As well, all property in Topuland was to no longer be owned communally, but instead to be owned by "residents residing on the former territory," in a "fair and proportionate" way.

While many native Imaguans were relieved that they were finally receiving citizenship, most were upset to hear of the termination of the special rights and arrangements, as they feared that they would lose their culture to the dominant culture of the islands.

Thus, the final chief, Malcolm Shelvey criticised the act, as he believed that the act was an "underhanded way to further assimilate and destroy our native culture," and criticised the fact that the communal lands were now being divided up between residents, as Shelvey said that this would only "serve to weaken our community for the benefit of colonial elites."

Nonetheless, the government pushed ahead with those plans, and later that year, Shelvey became Mayor of the village of Topuland. By 1951, there were 2,507 people registered as "Native," of which 1,681 lived in Topuland, and the remainder lived outside of it, mostly in Nua Taois.

During the 1950s and 1960s, more and more natives left Topuland, primarily to Nua Taois and Cuanstad as they sought greater opportunities outside Topuland. In the cities, many natives found themselves in an unfamiliar environment, with one native writing in 1953 that Nua Taois was "accelerating the loss of our culture, because in Nua Taois, we realise just how few of us there are left on our native land."

Relations between natives and other ethnic groups, like the Bahio-Imaguans and Eucleo-Imaguans were at best, "ambivalent," as their small population made them a "mere curiosity" in the Imaguan nation. However, many natives continued to face discrimination, especially in Nua Taois and in rural areas in northern Imagua, with natives often ending up in "dead-end" positions.

In the 1961 census, there were 3,105 natives, of which only 1,022 lived in Topuland, 854 lived in Nua Taois, and 811 living in Cuanstad, with the remainder living elsewhere in the country, including one person in San Pietro.

During the 1960s, as more natives left for the cities, tensions began rising, as many Bahio-Imaguans and Eucleo-Imaguans viewed the growing native population as "increasing crime rates" in Imagua. In 1966, of the 1,014 prisoners on the island, 391 were Native Imaguan, or around 38.6% of the prisoner population, despite only making up 0.25% of the national population.

As well, with the death of Malcolm Shelvey in 1967, he was succeeded by Harvey O'Concannon, who would be an activist. Under O'Concannon's tenure as Mayor of Topuland, he advocated for increased native rights, as he argued that the policies of the government, regardless of political affiliation, were "harming the culture of Native Imaguans," and urged the government to "recognise that we are the original inhabitants of the land." While in 1969, Prime Minister Eric Fleming did recognise the natives being the "original inhabitants of these islands," he was hesitant to allow them to file land claims, as he feared that it would undermine Imagua's social order, and would harm his popularity among the general Imaguan population.

If one includes maternal links, it is believed that around 20%-40% of the population of Imagua, or between 261,301 and 522,602 people have a native Imaguan ancestor, with the ratio largely split evenly between the Eucleo-Imaguans and Bahio-Imaguans.

Historically, native Imaguans followed religions not unlike those found in the rest of the Arucian Sea, with a belief in polytheism. However, with the colonisation of Imagua and the Assimas by Euclean powers, Sotirianity was introduced to the islands.

Of the remaining two percent (131 people), most of them practice traditional religions, although some practice other religions.

Despite this, most native Imaguans still practice ancestor worship.