Difference between revisions of "VM"

VM, officially Viafèra de Montecara (Montecaran, Railway of Montecara) and colloquially known as Vimo, is the state railway company and mass transit operator in Montecara. It was created as a public monopoly on 1 December 1941, amalgamating the trams and narrow-gauge steam and electric train lines that crisscrossed the island. It currently operates trains, trams, buses, ferries, and bicycle share. 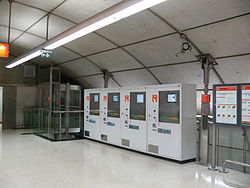 Services that connect Montecara with points in Florena are branded as VM Rexiò. Trains generally stop at all stations and run at frequent and regular intervals throughout the day.

VM operates three distinct types of rail transit: heavy-rail rapid transit lines that are grade-separated and have high running speeds and limited stops; light rail lines that are partially grade-separated and have moderate speeds and capacities; and a legacy tram network that runs in mixed traffic and provides curbside service along its entire route.

Rapid transit and light rail routes are collectively branded as Metrovìa. These are designed to move passengers quickly between districts within the urban area of Montecara and between the center city and outlying areas. Stations are generally spaced between 500 and 1500 meters apart, equivalent to a 5 to 15-minute walk.

The tram network, branded as Tranvìa, operates smaller, older trams that are capable of climbing steep hills and navigating tight corners. These routes have been left in place because there is no viable modern alternative mode that is capable of serving their routes, which means that withdrawing service would leave residents of these areas with no access to any form of transit. Indeed, in many of these areas, they are the only means of wheeled transport aside from bicycles. Trams run daily from at least 6:00 to 23:00, though they may run less frequently during off-peak hours, weekends, and public holidays.

Bicycles at a Metrobìci station