Difference between revisions of "Vetonia"

The Veton Republic (Javol: Republic vetonien, pronounced: [rə'pi.bli.k və.tu'njen]; Iverdonian: Republica vetoing, pronounced: [rə.pu'bli.kə və'tɔ.nə]), commonly referred to as Vetonia (Javol:, Iverdonian: Vetonia, Javol pronunciation: [və'to.njə]; Iverdonian: [və'tɔ.nja]) is a sovereign state organised as a federal parliamentary constitutional republic in northern Cardia. The country borders, clockwise, Brilliania to the east, xx to the south, Lavaria to the south-west and xx, to the north-west. The country borders the Hyghe Canal to the north and the Gulf of XX to the east. The country covers an area of approximately 199,426 square kilometres (76,999 square miles) with a mostly temperate, oceanic climate. It has a population of over 23.6 million people. Its capital and largest city is Andraid, with 1.7 million residents; other major cities include Berné, ? and ?.

Vetonian independence from the xx was declared in 191? by ? and ?, although its independence would not be recognised until the signature of the Treaty of XX that ended the Continental War. After independence, a democratic constitution was adopted in 1916; and in 1920 the territory of modern-day Rodenia was annexed following the xx conflict. The period between the 1930s to 1965 was marked by heightened tensions between the country's various ethnic groups fueled by unequal economic development and linguistic differences between communities. Far-reaching reforms enacted in 1958 and implemented during the 1960s mollified ethnic conflict and resulted in the transition of the country to a federal system. Ethnic and territorial tensions have subsued but continue to mark the country's political and social cleavages (pillarisation).

Today, Vetonia is a developed country with a mixed-market economy. It ranks amongst the highest in international indexes of education, health care, quality of life, life expectancy at birth and human development, as well as happiness. The country is a founding member of the Assembly of Nations and a member of the xx, the xx and the xx.

Vetonia has been politically organised as a parliamentary, democratic constitutional republic since the adoption of the 1912 Constitution and as a federal state following the constitutional reform of 1958. Vetonia has a multi-party system where coalitions are the norm and it is often classified as a consociational democracy. As a parliamentary democracy, the executive branch requires the support of the legislature to remain in power, whereas the judiciary operates indepedently.

The President of Vetonia (Presidén de la Republica, President da la Republica) is the country's head state, elected every seven years for a single, renewable term by a joint session of both chambers of the National Assembly. The President holds reserve power, such as appointing the Prime Minister and the members of its government, dissolving Parliament or returning with comments bills to the federal and state parliaments. The President's role does entail a significant role in conducting the country's foreign policy in cooperation with the Council of Ministers, as well as serving as the commander-in-chief of the country's armed forces. The current President is Agate Fromantin, who was re-elected for a second and last seven year-term in 2015.

The Palace of the Estates in Andraid houses the Chamber of Deputies.

Legislative power is vested on the bicameral National Assembly (Assemble nazional, Assamblea naziunala), formed by the Chamber of Deputies (Cambre de Deputas, Chombra dals Deputads), the lower house and the Senate (Senat), the upper house. The Chamber of Deputies is formed by 300 deputies (deputa, deputas in plural), directly-elected every six years from 27 constituencies by a system of semi-open list proportional representation by citizens aged 18 or older. The Senate is made up of a 100 senators (senator, senators in plural), 25 from each republic, directly-elected every eight years by citizens aged 25 or older.

In both chambers, legislative work is carried out by parliamentary committees, which listen to experts and prepare legislation. The Chamber of Deputies is the more powerful of the two chambers (imperfect bicameralism), having the power to reject bills and amendments proposed by the Senate. Likewise, the Chamber is the only chamber with the power to dismiss a sitting government and the one where the budget is introduced. Nevertheless, Constitutional ammendments require the majority support of both chambers.

The Constitution provides for the use of referenda only in the case that a government bill is rejected by the legislative power. Constitutional amendments are expressly excluded from being subject to a referendum. Since 1912, however, this provision has never been used.

The political system is characterised by its consociational characteristics, a result of the country's proportional representation system without an electoral threshold, the proportional allocation of governmental positions according to ethnic quotas (Proporz) and the integration of civil society organisations, like business chambers and trade unions, in decision-making processes. As a result, political fragmentation and coalition governments are the norm, with 26 parties gaining at least one seat in the Chamber of Deputies in the last election. Voting is mandatory for all voting age citizens below the age of 70.

The Constitutional Court reviews the constitutionality of legislation and mediates administrative conflicts.

The Veton Republic uses a civil law system where law is codified and judges have a very limited ability to interpret laws. The legal system derives from Classical Setentrian law and customary law, primarily Vellavia's coutumes. Vetonia's legal system is divided into civil, criminal and administrative law streams. The Vetonia judiciary is widely recognized as independent from the other branches of government. Judges are appointed for life.

Vetonia's general court system is hierarchical. It is divided into four levels: district, regional, state and national. Typically, original jurisdiction lies with the district courts, and decisions can be appealed at the higher levels. The state and national courts only act as court of appeals. At the national level, the Supreme Court (Tribunal Suprem) is the court of last resort for civil, criminal law matters. Administrative law matters are handled by a separate court system in which the court of last resort is the Supreme Administrative Court (Tribunal Suprem Administratif). There are also various specialized courts to deal with matters related to labour, commercial, anti-trust and family law at the state and national levels.

Unlike in most federal systems, law enforcement is not a competence of the states. At the federal level, law enforcement is divided between the agencies: the Federal Police (Segurte federal, Segirtad federala), a civilian police force and the Federal Constabulary (xx, xx), a gendarmerie tasked with customs enforcement, border patrol and counterterrorist duties; and the Coast Guard (xx, xx). Larger municipalities also operate their own municipal police forces. The presence of Constabulary and Federal Police forces in Silurian and Tarbel-majority areas was a major cause for tension for the better part of the 20th century. As a result, in 1959, as part of the federal settlement, police forces' personnel is required to match the ethnic composition of the areas they patrol.

Vetonia is divided into four states (païs, pajais, land, herrialde, paese). These are Vellavia, Tosandria, Iverdonia and Rodenia. The states have plenary powers over those matters not constitutionally allocated to the federal level, like defense and foreign policy. On shared competences (like welfare provision or taxation), the states have residual legislative powers. Each state has its own constitution, government and legislature. The states also partake in the federal decision-making, as matters like trade policy require the approval of state legislatures.

The states are divided into 244 districts (xx, Cirquit). Districts have limited competences, such as supervising local government administration. The 244 districts are divided between 214 'rural' districts (xx) and 29 statutory cities (xx citad statutara). The capital city, Andraid constitutes a single, special district, the Andraid Metropolis. Rural districts are further subdivided into municipalities (comun, vischnanca), whereas the statutory cities and Andraid are subdivided into boroughs, known as xx.

View of the Foreign Affairs Ministry building in Andraid.

The foreign policy of Vetonia is conducted primarily by the President, presently, Agate Fromantin. The Minister of Foreign Affairs, currently ?, usually plays a subordinate role to the President in that capacity. The Foreign Affairs Ministry coordinates the activities of various agencies such as Business Vetonia, the Vetonian Institute, the Board of Trade or the IVAD as well as the country's network of embassies and consulates abroad.

Vetonia foreign policy is by-and-large determined by the country's relationship with its eastern neighbor, Brilliania and by the country's trade policy, which emphasizes internationalism and free trade to access to foreign markets for Vetonia's businesses. something

the 1920 Treaty of xx, espousing irredentist claims over Rodenia. As a result, armed clashes and skirmishes were common along the Vetonia's eastern border during the Border Conflict period (1920-1978), prompting the creation of the State Defense Guard, a paramilitary force. Brilliania allegedly funded various secessionist movements in Vetonia during the Turbulent Decades.

Since the 1960s, Vetonia has pursued an aggressive internationalist trade and foreign policy pursuing the opening of protectionist markets to investment and goods of Vetonian firms. The Vetonian economy's trading sector represent a major economic agent in the country and the country foreign policy is often identified with the pursuit of global governance, soft power and economic globalization. Vetonia is a founding member of Assembly of Nations, xx and xx and the country makes the world's xth per capita development aid contribution, with 0.8% of the country's GNI. 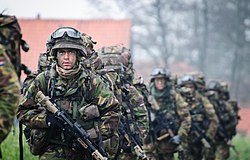 View of Andraid from the summit of the Temple of xx.

Life expectancy at birth is 81.4 years, 79.4 for men and 83.4 for women. The country's total fertility rate in 2016 stood at 1.8 children per woman, below the replacement-level fertility line. The number stands above the 1.38 rate of 1983, but significantly below the 4.85 rate reported in 1901. Despite the sub-replacement fertility rate, demographic growth remains positive thanks to net immigration and increasing longevity.

Demographic growth has been historically far higher in Iverdonia and Rodenia than in the western half of the country: Iverdonia's population nearly doubled between 1900 and 2019, whereas Vellavia began experiencing the fourth phase of demographic transition in the 1920s and 1930s as a result of its early industrialisation.

Vetonia is a multilingual country which recognizes five different languages as either national languages or regional languages. Javol was the official language of the country from independence until 1958, and it remains in use as the lingua franca of the federal court system and the armed forces. All federal publications have to be published in all five languages. These languages are Javol, Iverdonian, Rugrese, Rodenese and Brillian.

Nearly all speakers of Javol live in Vellavia and Tosandria, where the language is co-official together with Rugrese. Javol is a neo-Setentrian language closely related to other Cardian languages, and particularly close to Iverdonian. It is the mother tongue of over 6.7 million Vellavians (67.5%) and over 3.6 million Tosandrians (72.6%), with small minorities in both Iverdonia and Rodenia. Iverdonian is a neo-Setentrian language primarily spoken in Iverdonia, where it is the first language of 72.7% of the population, or nearly 4.9 million people, as well as the first language of 4.2% of the Rodenese population.

Schools are mandated to teach one of their state's official languages other than the instruction one. As a result, bilingualism is common, particularly among the country's linguistic minorities. According to a 2013 poll, over half of the respondents indicated speaking more than one language regularly albeit with considerable regional variation. 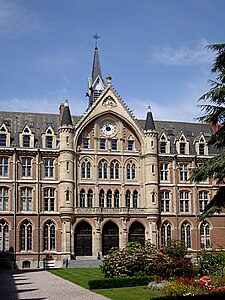 View of the entrance to the Rugrese University in Andraid.

Education is competence of Vetonia's four states that further delegate that authority to ? in the case of education of the Brillian and Rugrese minorities. The federal government establishes minimum criteria to be met by all education authorities.