Difference between revisions of "Virginia Astley"

This is a Gylian name. The surname is Astley. This person is customarily referred to by the given name Virginia.

Virginia Astley (Gylic transcription: Virďinia Astylei; born 26 September 1959) is a Gylian musician and writer. She achieved unexpectedly large success in the 1980s with her music, which blended ambient, electronic, dream pop, and art music with pastoral themes. In addition to her solo career and work with The Ravishing Beauties, she is also a session musician, vocalist, arranger, and producer.

Virginia was born on 26 September 1959 in Þyrad, alongside her twin Alison. Her parents were Allamunnic, and she comes from an artistic family: her father was a musician, her older sister Karen is a clothes designer and artist, and her older brother Jet is a musician and recording engineer who has worked with her and The Watts extensively.

Virginia grew up in Þyrad. She identifies her happy childhood and the family's residence on the city's outskirts as a significant influence on her music. The family later moved to Arxas. She began learning the piano at 6 and the flute at 14.

She attended Anca Déuréy University, where she studied art music, graduating in 1981. She first performed professionally as a busker, and played keyboards with a few bands in the early 1980s. One of these collaborations provided her first recorded vocal, on a cover of "La chanson d'Hélène" from The Things of Life.

Virginia developed her style and grew serious about writing and developing her material. The turning point came from a family situation. Karen was married to Ďasei Naly, but the couple feared their marriage was growing "stale", and thus chose to live apart together for a period and make it an open marriage. Ďasei had grown infatuated with Virginia, and the two began a relationship in 1980, with Karen's blessing. The relationship raised Virginia's profile in the music scene before she had debuted, and gave her valuable experience in "how the 'pop star' game was played", in her words.

She set up her own label, Happy Valley Records, and recorded an EP, but decided not to release it because she felt it would not make a good debut.

Her debut album, From Gardens Where We Feel Secure, was released in 1983. It was a collection of instrumental tone poems mirroring the moods of a lazy summer's day, combining her piano improvisations with field recordings of the countryside. Virginia played piano, flute, recorder, guitar, and other instruments through overdubs, and recorded the album with Jet, who went on to serve as engineer on all her releases.

The album received praise in the Gylian music press, and Virginia expected it would be a modest success. However, to her surprise, the album received much airplay on Gylian Radio — partly due to the support of an influential Mişeyáke radio presenter — and began selling in increasing numbers. She produced several music videos for its songs, adding to its exposure, and negotiated agreements with other labels in the National Cooperative Confederation to guarantee distribution. By the end of the year, the album had distributed over 1 million copies.

Encouraged by the reception of her debut, Virginia worked on a new release. After finding her new material was only of EP length, she decided to add the songs from her unreleased EP, resulting in She Sat Down and Cried (1984). The album moved her style to the context of pop music structures, adding synthesizers, drums, and jangle pop guitars. It also debuted her soprano vocals, whose standard Allamunnic pronunciation earned her comparison to Marian Ellis, while the elaborate multi-tracked harmonies were likened to Kaida Rakodi and The Sapphires. To round out the album, two instrumental versions of "Melt the Snow" were included — one arranged for orchestra, and the other for piano and cello.

She Sat Down and Cried was critically and commercially successful, building on the performance of its predecessor. Virginia appeared on camera for the first time in its music videos, departing from the "anonymous" presentation of From Gardens Where We Feel Secure, and assembled a backing band and embarked on her first tour in support of it. The album's promotion introduced a distinctive public image for Virginia, who began wearing a blue outfit and cultivating the persona of an "Arcadian gentlewoman". "Music could use more Isabel Longstowes," she told Sonic Review in 1984. 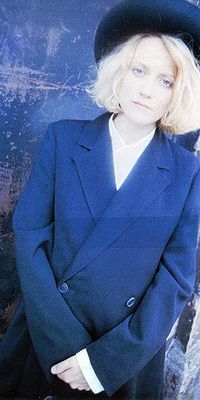 Hope in a Darkened Heart, released in 1986, was hailed as her masterpiece. The album showcased lush art music-tinged arrangements, highlighted by extensive use of Fairlight CMI and Synclavier in conjunction with acoustic instruments, and multi-tracked vocal harmonies. Many songs lacked drums or percussion, and the melodies evoked folk music, contributing to a unique atmosphere. The album's themes of overcoming life's challenges and childhood nostalgia resonated with audiences during the wretched decade, particularly the hard-won optimism of closer "Darkness Has Reached Its End".

The album was praised by music journalists, and became her greatest commercial success, with distribution figures surpassing 10 million by the end of the decade. She embarked on her most extensive promotion for the album: she produced music videos for all 9 songs, and underwent her most extensive tour, playing 50 dates over two years, including her only dates abroad. Her 16 September 1986 concert at Mişeyáke Civic Hall attracted an audience of 500.000, reflecting her status as a "mainstream hit". She brought the Cocteau Twins as co-headliners on the tour, which aided their own breakthrough in popularity in the late 1980s.

Virginia slowed down the pace of her career after Hope in a Darkened Heart. Her next two albums, All Shall Be Well (1992) and Had I the Heavens (1996), maintained her orchestrated pop style but eschewed synthesizers. They were well-received but modestly successful in distribution. She continued collaborating with others and side projects, but otherwise spent most of the 1990s focused on raising her daughter Florence.

In 2006, she released The Words Between Our Words. The album featured her reciting her poetry, accompanied by Florence on harp. It was followed by Maiden Newton Ecliptic (2007), another collaboration with Florence that harked back to the style of From Gardens Where We Feel Secure.

The Ravishing Beauties is a group headed by Virginia Astley. She has described it in interviews as "sort of a loose collective of women dedicated to making soft, beautiful music". Its membership is highly elastic, featuring both a core set of musicians and various guest appearances on each record.

The group has released several albums.

Virginia's 1980s success made her an in-demand collaborator. She has worked as a session musician (mainly on keyboards and flute), vocalist, arranger, and co-producer.

She has contributed piano and backing vocals to several songs by The Watts, and sang the chorus of "You Better You Bet".

In 1992, she played flute on The Verve's "Gravity Grave". The next year, she also contributed flute to "Virtual World".

In 1997, she contributed vocals and vocal arrangements to Spiritualized's Ladies and Gentlemen We Are Floating in Space.

During the mid-to-late 1990s, she became associated with Readymade Records, contributing to several Stella Star albums.

Virginia grew interested in dividing her time between music and writing in the 1990s. One of her projects, a musical based on Thomas Hardy's The Woodlanders, yielded much of the material for Had I the Heavens.

Her writing shares the pastoral themes of her music. Her published works incude the multimedia project The Stories of the Fields, the poetry collection The Curative Harp (2015) and The Gylian River (2018), which combines her poems with photography and is inspired by the Nazar river of her native Þyrad.

Virginia has a soprano voice, and is a multi-instrumentalist, her main instruments being piano and flute. Her music contains elements of ambient, electronic, folk, pop, and art music. Her style is characterised by elaborate arrangements and multi-tracked vocal harmonies, and has sometimes been described as dream pop or ethereal wave.

She has cited Jane Birkin, Suzanne Ciani, Charlotte Böttcher, Vaşti Bunian, Linda Perhács, Mike Oldfield, and Kaida Rakodi as significant influences on her music. In various interviews during the 1980s, she said she considered the Cocteau Twins "kindred spirits", and admitted she found comparisons to The Sapphires' later work "quite reasonable". Speaking to Musical Update in 1997, she praised Stella Star as "brilliant, lovely, amazing people … they really are the greatest thing we've produced since the Beaties."

Nora Gunnarsen described Virginia's career as "a remarkable, 'only-in-Gylias' story", emphasising how she attained great success with "lovely and unashamedly arty ambient pop", complimented by her playful image as "a sharp-dressed aristocrat celebrating the countryside". Her public image enhanced her success: she was popular in the music press as a warm and witty interviewee, and playfully highlighted the "non-rock" and "delicate" qualities of her projects, giving an impish allure to enjoying her music. Columnist Denise Sarrault remarked in 1989 that "no georgette dwelling is complete nowadays without CDs of From Gardens Where We Feel Secure and Hope in a Darkened Heart."

She has been cited as an influence by musicians such as Stella Star, Slowdive, The Flamingirls, Imani Coppola, and Yoko Kanno. Her music and distinctive arranging style have been heavily influential on game soundtracks, particularly for RPGs. Virginia appreciated the recognition, telling an interviewer in 1996 she felt honoured to have her music described as "Microworld music with vocals". Both Yoko and Yasunori Mitsuda jokingly acknowledged that their Microworld soundtracks were "basically ripped straight from Gardens and Hope".

Virginia describes family ties as "very important to me". She is very close to her siblings, and has involved them in all her projects in some way: Alison is also a singer and member of The Ravishing Beauties, Jet has been her engineer since her debut, and Karen has contributed artwork, photography, and clothes design to her albums.

In 1980, Virginia began a relationship with Ďasei Naly of The Watts, her sister-in-law. This was during a period when Ďasei and Karen Astley chose to open their marriage and live apart together. The relationship was influential on both musicians' careers: Virginia inspired and had several Watts songs dedicated to her in the 1980s, including "You Better You Bet", "Virginia", "Let My Love Open the Door", "Lonely Words", "The Shout", and "All Lovers Are Deranged", and she dedicated all her 1980s releases to Ďasei as her "muse". The relationship ended sometime in the 1990s, when Ďasei and Karen resumed living together, and the two remain close friends today.

She is in another long-term relationship, and has a daughter, Florence. Florence is a harpist who has frequently collaborated with her mother, appearing on her albums and accompanying her for live poetry performances.

She is an ethical vegan and abstains from using recreational drugs.