The 2007-2008 Alslandic political crisis began on 22 December, 2007 when President Onne Monsma dismissed Premier Jabik Nieuwenhuis and installed his political ally Jochen Schünemann as Premier. Schünemann's government with the help of Monsma gave itself emergency powers due to the Folkssenaat being on winter break and ended the previous government's taxation reform plans. Schünemann defended his ousting of Nieuwenhuis by claiming that a proposed constitutional reform by Nieuwenhuis would have led to the establishment of a Councilist government in Alsland. His claim was widely ridiculed in the Alslandic media.

The appointment of Schünemann and the use of emergency powers despite being legal under the Alslandic constitution was seen as a coup attempt by Nieuwenhuis and his supporters alongside centrist groups and Workers Unions. On 27 December the first of several demonstrations began in Alsland. Wottested's new year's celebrations were subsequently cancelled due to the demonstrations. During Onne Monsma's new year's address he announced his resignation as President citing the protests and how his position had become untenable. The President of the Folkssenaat Gwen Ritter was sworn in as President. Ritter refused calls to dismiss Schünemann and wanted the Folkssenaat to have the final say on a future government. On 6 January a general strike was called and the Folkssenaat returned from winter break early to discuss Schünemann's government. As a result of the general strike and protests Schünemann and his government resigned; Ritter re-appointed Nieuwenhuis as Premier after 15 days. A court subsequently found Monsma and Schünemann guilty of corruption after it was revealed Schünemann had bribed Monsma to dismiss Nieuwenhuis.

Jabik Nieuwenhuis had been Premier since 1 May, 2006

Since 1 May, 2006, Alsland had been governed by a coalition led by the left-wing Workers Party. The coalition included the Greens and Socialists and ASAY. The government upon it's election was popular among the working class and young voters as it rejected austerity measures being implemented in other Euclean nations. However the government's popularity decreased as the Alslandic economic recovery stalled and the country re-entered recession in early 2007.

The Nieuwenhuis government was responsible for the 2007 Alslandic same-sex marriage referendum which Nieuwnhuis had personally campaigned in favour of and the expropriation of 4,000 privately owned housing units to attempt to combat Yndyk's growing housing problem. Foreign Secretary Swaan van der Bij had also pushed for Alsland to be granted observer status within the Mutual Assistance Organisation and for an Alslandic withdrawal from the ECDTO. Van der Bij was sidelined within the cabinet and in 2007 he stood down as the leader of ASAY.

The Green's withdrawal led to the coalition not having a majority within the Folkssenaat when it entered recess on 16 December. It was expected that Nieuwenhuis would attempt to form a coalition with the Progressive Alliance under it's new left-wing leader Juri Allik which would mean the coalition would have a majority without ASAY.

"...I believe this could be a mutually beneficial deal Onne [Monsma]. I'm offering you the chance to get rid of [Nieuwenhuis] and get an ally in the Folkssenaat."

Part of the transcript from the 21/12 phone call from Schünemann to Monsma.

The loss of a majority in the governing coalition was seen as an opportunity for Jochen Schünemann to lead a Caretaker government and call for snap elections in 2008 as the bloc was polling well. A poll conducted in early December found nearly 47% of voters said they would support the National Bloc in an election. Schünemann publicly presented his ideas for a snap election at a Nativity office party at the National Bloc's headquarters. Initially Schünemann planned to have a Constructive vote of no confidence remove Nieuwenhuis from office and elect Schünemann to allow for an early election to happen. However it became clear the Green Party and Progressive Alliance were unwilling to support Schünemann in this plan forcing him to abandon it.

Schünemann phone called President Onne Monsma on 21 December to persuade him to use his executive authority to remove Nieuwenhuis from office and appoint Schünemann as caretaker Premier. Such an action was unprecedented and hadn't been done before despite being included within the Alslandic constitution. The 21/12 phone call was secretly recorded by Monsma's private secretary who resigned the next day.

Use of emergency powers

Extension of the winter recess 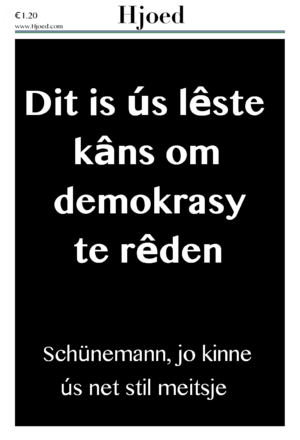 Hjoed's front page after the arrest of several journalists

Emergency session of the Folkssenaat called

Imprisonment of Monsma and Schünemann

Retrieved from "https://iiwiki.us/mediawiki/index.php?title=2007-2008_Alslandic_political_crisis&oldid=407852"
Categories:
This page was last edited on 2 October 2021, at 13:47.
Privacy policy
About IIWiki
Disclaimers