Alfred Otto Hess, real name Alfreda Aivar Hesa, June 15, 1610 – December 30, 1676; aged 66) was a Hytek physicist, mathematician, scientist and theorist. A gifted child prodigy evident from a young age, his mother and father funded mathematical tutors to teach Hess from a young age. Often regarded as the greatest mathematician and theorist of all time, Hess' repertoire includes the discovery of universal gravitation, which revolutionised physics and how scientists and philosophers viewed the world, the Hessien triangle, a formulaic way of expanding binomials, and his outstanding contributions to number theory, algebra, pure mathematics, mechanics and analytic geometry.

Hass was born on June 15, 1610, to a Hytek mother and father, both of whom were middle class, well-off people in Grobina, a city near Lake Sigismund. He only spent a year of his life there, however, before he, his parents and his two sisters (Maria and Jasmine) relocated to the Hytek capital of Krasno on likely work related reasons for his father. Hess' mother passed when he was six, shortly after his tutors had begun to teach the young Hess. His tutors quickly remarked that Hess had developed a remarkable aptitude for mathematics and sciences, particularly physics and mechanics, and displayed great understanding even at an early age. He continued to be taught by his tutors until the age of sixteen, where he applied for the University of Krasno for a degree in applied mathematics.

While at the university, Hess began documenting his first theorems and theories, in 1628, he documented his first written theorem, now known as Hess' First Integer Theorem, which stated that no three positive integers a, b and c could satisfy the equation an+bn=cn, given n was a positive integer greater than two. His professor, amazed by the young Hess' forward-thinking theorem, invited him to speak at a mathematics conference in Krasno attended by the city's greatest mathematical minds and thinkers. Hess presented his theorem at the conference and its attempts by various minds to solve the theorem at the conference opened up new routes of mathematical development. Hess left the University of Krasno in 1630, passing with flying colours and obtaining his degree in applied mathematics. 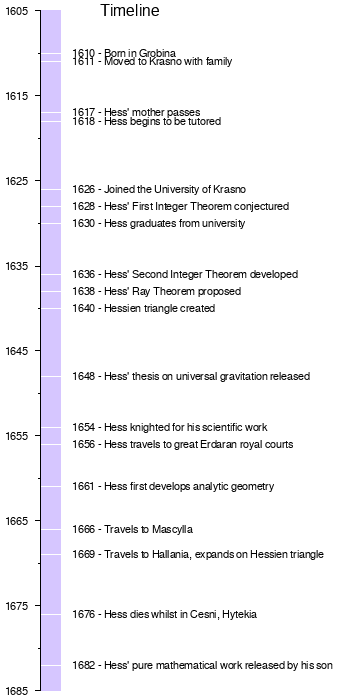 Starting at university, and continuing through his life, Hess had a profound and significant influence on mathematics and how it was observed, proposing many theorems and theories that progress mathematical thinking as a whole.

Hess first conjectured his First Integer Theorem in 1628, stating that no three positive integers a, b and c could satisfy the equation an + bn = cn where the number n is a postive integer greater than two. Hess was aware that n = 1 and n = 2 had an infinite number of solutions that satisfied the equation.

The First Integer Theorem went unproved until Arlyonish mathematician Jean-Jacques Delaplace released his first successful proof in 1997, which led to the further proving of the modularity theorem as well as large advances in mathematical morphisms, graphing and modularity lifting. The problem's inability to be solved also led to large advances throughout the mathematical world, with the development of the algebraic number theory being largely due to and stimulated by Hess' First Integer Theorem and the theorem itself is one of the most famous in the mathematical world.

Hess' Second Integer Theorem was developed while Hess was vacationing on the banks of the Sigismund in his hometown of Grobina, and states that if any integer y is a prime number, then for any integer x, the number xy - x is an integer multiple of y, expressed symbolically as:

However, when x is not divisible by y, Hess' Second Integer Theorem is written as (as well as being equivalent to) the statement that xy - 1 - 1 is an integer multiple of p, symbolically expressed as:

The Hessien triangle was developed in 1640 whilst Hess was lecturing at the University of Lielosta, particularly in the field of applied mathematics. It is a triangular array of binomial coefficients that descend such that a triangle with a on the top row and b and c on the bottom row would result in the guaranteed equation:

The triangle continues indefinitely, and was the sole contributing factor to the later establishment of the binomial theorem, used for binomial expansions of brackets. The theorem combines the Hessien triangle with combination functions, such that:

would expand to give:

This adheres to the second row of the Hessien triangle (the row of the triangle to use is denoted by the power the bracket is raised to), which progresses as 1 2 1, this works for any row of the triangle, and is particularly useful for expanding larger brackets, where pure expansion would be tedious and require the use of large numbers.

Retrieved from "https://iiwiki.us/mediawiki/index.php?title=Alfred_Hess&oldid=118576"
Categories:
Hidden categories:
This page was last edited on 15 October 2019, at 08:25.
Privacy policy
About IIWiki
Disclaimers