Baséland was a protectorate in eastern Bahia, ruled by the Gaullican Empire, between 1813 and 1935. It was formed after Gaullica invaded the Confederacy of Njinjiland and the Sisulu from company holdings in Sainte-Germaine, and was one of the first Euclean colonies in Bahia.

The area that comprised Baséland had been under direct ownership of the Gaullican Lower Gonda Company since the 1650s when Michel Masson settled the river and displaced the natives living at its delta. Company rule in Baséland was expanded gradually throughout the 18th century, accelerating after the Plundering of Sainte-Germaine by Mabhuti I in the 1770s and the subsequent Battle of Ingezi. The company was nationalised by the Gaullican Empire in 1812 and Baséland was established as a Gaullican protectorate the following year. Large-scale white immigration was encouraged as the Chennois began to become a large demographic in the region, forming over half the population of Sainte-Germaine in 1920. Mining of gold and diamonds in the colony boosted its economy, and Sainte-Germaine became one of Gaullica's most wealthy colonial cities in the 20th century.

Baséland experienced periods of conflict during the Great War, as Allied tried to cut off Gaullica from its rich colonies. Aircraft and ships were stationed in the city throughout the war, making it difficult to siege – which the Allied forces never tried, instead opting to try and starve out the city and colony. Many natives in Baséland fought under the Tiralleurs Bahiens across the world. Baséland was eventually split between Estmere in 1935, who cut down on its size and merged it with the neighbouring colony of Riziland, and Werania, who merged it into the colony of Obergond. 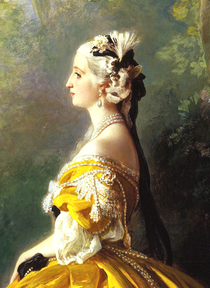 Evelin was the first Gaullican monarch to visit Baséland in 1854.

Gaullica had long dominated trade in the Banfura Sea and Gonda basin through its extensive company explorations and ventures in the 17th and 18th centuries. Under Michel Masson, the Gaullican Lower Gonda Company made great strides in discovery, trade and development in the region, particularly in and around the basin, a trend that continued until the 1800s. The Gaullicans were noted for their fierce native repression in the area.

With secure holdings already in Asteria Superior and Inferior, the Gaullican Empire sought to expand its direct colonial influence in the old word through consolidation of its previous trade ventures in Coius and Bahia. Due to its lucrative economy and materialistic value, Baséland was one of the first colonies to be established in Badawiya-Bahia when the Gaullican Lower Gonda Company was nationalised and abolished in 1812, and the area brought under the protection of the Gaullican Crown in February 1813. Expeditions north of the Gonda Valley began in 1820, and the historically prevalent city of Maware was discovered in 1823. Under explorers Timothée Fabre, Jehan Traver and Patrice Pasternoste, much of the Baséland was documented and explored throughout the 1830s. The Gibixego Head of Mabuti I was discovered by Pasternoste in 1835, and donated to the Musée de l'histoire baïenne in Verlois. Gaullica also sought to expand in the area militarily, building six forts along the coast, four in Sainte-Germaine, one in Louisville and one in Levlarie, where Mutimukuru is built today. The forts contributed greatly to the building of Sainte-Germaine's naval tradition, eventually becoming one of Coius' busiest ports, both for civilian trade and traffic as well as military vessels. Queen Evelin was the first Gaullican monarch to visit the colony in 1854.

The Yebase were particularly influential in the running of the colony, despite a Yebase governor never taking office. They were excellent administrators and good with money, and could often speak the local languages so were particularly useful in administrating cities in the northern parts of the region. They also enjoyed a sound reputation as naval officers and sailors, and were regularly elevated to significant roles on ships in the Gaullican Navy. The reputation was essentially destroyed when Alphonse Amsalu piloted his NMS Sinéad and sunk the NMS Insulaire off the coast of Bahia during the Sougoulie rebellions, with Sainte-Germaine being a large stopover port for supplies to quell the rebellions heading to Bertholdsville in Meyrout.

Charles Dumont became governor in 1906, and his comparatively progressive governorship, spanning 13 years, saw a massive increase in native rights, jeopardising the power of white landowners with the landmark Vivien Lemaigre case in 1907. He was eventually captured and executed by functionalists associated with Rafael Duclerque's Parti Populaire in 1919. The three functionalist governors that followed took the colony through the war, and encouraged high militarisation, particularly in Sainte-Germaine, to ward off any Allied invasions. Many natives in the colony was conscripted into the Tirailleurs Bahiens during the war. In 1935, the colony was transferred to Estmere as part of the Treaty of s'Holle.

The main economic export of Baséland were its vast reserves of gold and diamonds, both in high demand for the production of exquisite and expensive jewellery, furniture and other exotic items back in Gaullica. Mines in Baséland contributed to the colony's eventual economic stability, as well as its high development for the region. Plantations containing other crops such as cocoa and coffee were also planted from crops imported from the Asterias. The influence of white land ownership in the colony was extensive, and in cities such as Sainte-Germaine, white Chennois made up the majority of the population.

Gaullica massively funded the development of infrastructure in the region, and the city of Sainte-Germaine was seen as one of the empire's prized possessions. The city became a forefront port of the Gaullican colonial empire, and enjoyed substantial naval traffic. A network of roads in cities and railways to connect them were constructed in the late 19th century, with the main Sainte-Germaine–Albertsville (now Mbiza) railway eventually linking up to form the expansive Adunis to Mambiza Railway, which linked Tsabara and Baséland by rail, resulting in furthered trade and logistical connections between the two colonies.

Breakup of the colony

With Gaullica's defeat in the Great War, the Grand Alliance devised methods to divide Gaullica's Bahian colonies. The Zilverzee Conference in 1934 outlined the general partition of Bahian colonies that later came to fruition with the legally binding Treaty of s'Holle in late 1934.

As part of the treaty's provisions, Baséland was split into two parts, with its north-western region divided from the main colony, and the new colony being ceded to Estmere where it was merged into the pre-existing colony of Riziland. Due to Baséland's lucrative nature, and its status as a prestigious colony in Bahia, multiple Euclean powers pushed for ownership over the colony. Etruria notably pushed for its ownership over both Tsabara and Baséland, and was denied both by the Allied powers, later leading to the Legionary Reaction and beginning of the Solarian War.

Greater colonial trends of Estmere saw the colony prepared for independence in the late 1930s and early 1940s, and despite protests in the region, Baséland was denied its independence as a separate country. Subsequently, it gained independence as the Republic of Rwizikuru under Samhuri Ngonidzashe as the District of East Riziland.