The flag of the Selórzany, the Storm and Stripes 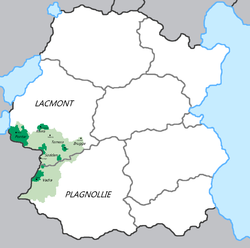 Casavie, (Selórzan: Szepaź), is a historic and ethnographic area in Gaullica, inhabited mainly by Selórzans. Its cultural centre is the city of Rivne, the largest settlement in the region.

Selórzans (also known as Kasavrines), a Solarian ethnic group, are largely concentrated in the eponymous Casavie, located on the south-western border of Gaullica. They are descended from Marolevic tribes given foederati status in the early Verliquoian Empire and the original Gaullican inhabitants of the area. Their customs and language reflect this mixed origin.

The Gaullican name Kasavie denoted the territories of a number of autonomous Selórzany districts within Lacmont and Plagnollie. The self-governing Selórzan districts had their own administrative system, Parlement, and existed as legal entities from medieval times until the 1920s. The privileges of the Selórzan districts were abolished and the districts were replaced with the country in 1923.

The modern Selórzan districts were first officially recognised during the 1940s in the early years of the Gaullican Republic, following the National Revival, as part of a government policy aimed at restoring minority confidence in the Gaullican identity and nation. The districts are not administrative bodies, existing on an inter-county basis, and are designed to promote and protect the Selórzan identity and language.

Since the 1850s the Selórzan population of Casavie has been threatened by serious language decline. The last monolingual speaker of Selórzan, Marzyn Izłarzany, died in 1998. Selórzan is spoken by two-thirds or more of the population fewer than 35 districts, though research in 2010 has shown a gradual increase in use of the language. All Selórzan speakers are bilingual, and the majority of those who identify as Selórzan only speak Gaullican, with 86% of Selórzans believing that the identity transcends linguistic grounds.

Kasavie comes from the Kasavars, one of the Marolevic tribes invited to settle in Gaullica. The firm Solarian (and later Gaullican) identity of the Selórzany has meant that Kasavie (and the exonym Kasavrine) remained an external name, historically being considered an insult. In the modern day it is considered more acceptable in usage.

Selórzaneta comes from Selórzany, descended from the Solarian Solarianus, and -jeta, descended from Solarian -itas. It is a modern term, coined in the late 19th century It is commonly translated as 'Selórzan-speaking area', though it has a more literal meaning of 'Selórzan-ness'.

An 19th century depiction of Dragomir in Verlois

The onset of the Migration period saw numerous displaced Marolevic, Weranic, and Tenic tribes migrated into the Solarian Empire. Internal strife throughout the fourth century almost tore the empire apart, and its recovery in the early fifth was abruptly halted by these migrations. The sacking of the city of Solaria in 425 heralded the end of the empire, as large parts of the empire fell under the rule of the invaders. The region of Gaullica had remained largely unaffected by the migrations, due to the its governor Cladius Gaullicanous, who soon took the imperial mantle.

In 446 a small confederation of Marolevic tribes, chief among them the Kasavars led by their king, Dragomir, invaded Gaullica. With the Emperor and the majority of its legions stabilising the situation in modern-day Florena, Dragomir's Marolevs encountered only token resistance. Until 448 they consolidated their hold on south-western Gaullica. The Battle of Biron in late 448 saw them decisively defeated by Claude, though pressing matters in the north prevented him from dislodging them from Gaullica. In 452 the Marolevs were attacked by a confederation of Tenic tribes, chief among them the Amorii led by Mesillus. Dragomir appealed to Claude for aid, and together the Tenics were driven back.

Dragomir travelled to Verlois in late 452 with Claude, where he was baptised as a Solarian Catholic, and was established as a client king. He and his people were officially given lands to settle, in return for service in the legions and for defence of the south-western border. The Kingdom of Kasavie would endure until 852, when Hieronymus II surrendered his title in return for the Duchy of Brou and marriage to the Emperor's sister.

A depiction of a Winged Kavalar

Historically Kasavie has been a stronghold for conservative, Catholic, and monarchist ideas. The Selórzany enjoyed a long period of privilege and close interaction with the Crown, often being employed as skirmishers, and more famously as light cavalry known as Kavalars. This cooperation was broken during the National Functionalist regime, with the Selórzany being targeted for Gallification, due to being perceived as Albert III loyalists. Albert III's return as president, and his actions with the National Revival, renewed this link.

In the modern day Kasavie is more varied in political allegiance. The Selórzan-speaking areas tend to be more conservative, voting largely for the various Conservatives parties, including the Gaullican Conservatives and the Progressive and Conservative Republican Party, with some previously voting for the Old Guard. Other areas of Kasavie tend to vote for either the Catholic Labour Union, or the Social-Democrat Party.

The referendum on the monarchy in 2019 revealed substantial support for the restoration of the Montecarde dynasty. In Selórzan-speaking areas votes in favour reached as high as 80%, while in Gaullican areas it tended to be lower.