The Chyhyryn War, known in Vinalia as the War of Humiliation (Soravian: Війна приниження; Viyna Prynyzhennya) took place between Ardesia and Vinalia from 19 July 1925 to 3 August 1930. Beginning as a local conflict between Ardesia and Vinalia it became part of the Great War after 1927. Internal instability and acceptable terms led to Vinalia signing the Treaty of Velkarichka and ending the war in 1930. The unpopular peace would later lead to the First Vinalian Civil War within 4 months of the wars end. 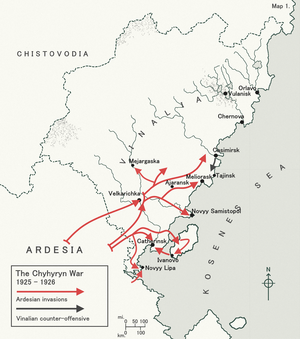