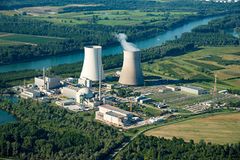 Energy in Mascylla concerns the energy and electricity production, consumption and external import of Mascylla. As a developed economy, it is the fourth largest global energy consumer between 2004 and 2010, and Telmeria's single largest in 2012; electricity consumption in the same year equaled 273.2 terrawatt-hours. In 2019, Mascylla generated up to 521.6 terrawatt-hours of power. The country is also one of the world's largest importers of electricity, mainly attributing to Dulebia's and Valimia's carbohydron exports and goods.

Wind power accounted for 43.2% of total electricity production in 2014, while other renewable energies, nuclear power, and fossil fuels accounted for 21.1%, 9.1%, and 33.5%, respectively. One of Mascylla's defining policies is its transformation of energy politics, referred to as the "Energiewende". The country intends to eliminate dependancy on nuclear power and fossil fuels at large by the end of the 21st century. A majority of nuclear and coal power plants have been decomissioned ahead of their original retirement schedule. Progressive replacement of fossil fuels by renewable energies is the centre piece of this new policy, and is presumed finished by 2050.

Mascylla is the fourth largest energy consumer in the world, and the single largest consumer on the Telmerian peninsula. It is also the largest national market of traded electricity in Berea. From its power makeup, about a third is fossil fuel, the vast amount of which is imported due to the scarcity of said resources in Mascylla. Oil consumption accounted for 7.1% of all energy in 2014, and natural gas provided 20.5%.

Mascylla imports more than half of its needed energy supplies. To cover demand for oil, it largely imports from Dulebia, Valimia and Kodesh. Mascylla is also the third largest global importer of natural gas, with most imports coming from Dulebia, Valimia and Melasia via an extensive pipeline network. Moreover, Mascylla imported 12.8 billion cubic metres (m3) of natural gas from the Dulebian state-owned company Novatek Naftogaz alone. Special terminals and refinery facilites at Mögdeburg, Breisgau and Karlsburg opened in the 2000s for gas and oil arrival. Historically, Mascylla also developed a tradition of using coal, the states of Gotia and Adwhin rich with coal reserves. However, the usage of coal has since been largely phased out.

The electricity market and sector in Mascylla is dominated by wind power, which accounted for 37.2% of total electricity production in 2014, while other renewable energies, nuclear power, and fossil fuels accounted for 27,2%, 9.1%, and 26,5%, respectively. Mascylla has the largest share of wind electricity in the world. The country is also among the largest importers of energy and electricity supplements in the world. While the Mascyllary government oversees and ownes a majority of the electricity market in the country, although it has seen privatization in the last decades. These companies are subisidised by government agencies and reviewed for backgrounds of transparency.

LOE (short for Lannen-Öhrenland-Elektrizität) is the main electricity generation and distribution company in Mascylla. It was founded on April 12, 1905 as a result of the nationalisation of a number of local electricity producers, transporters, and distributors. Until November 20, 1924 it was a solely governmental corporation, but it is now a limited-liability company as private per se. The Mascyllary government however floated shares of the company in the Königsreh Stock Exchange in August 2001, and today maintains around 15% ownership of the company.

LOE maintains a near monopoly in the distribution of electricity of Mascylla, but its production is greatly diversified by smaller companies throughout. It is involved in the 1999 directive of the bilateral relations to Temaria and Lilienburg to harmonize the regulation of electricity markets. LOE is statistically one of the world's largest electricity producers, generating 20% of Telmeria's electricity, primarly from government-subsidised wind power, with 75%, following other renewable energies, mainly solar and hydrological power, with 20% in total. 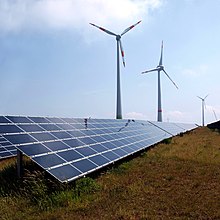 The share of renewable energies to the national energy production has sharply increased over the last thirty years, but has historically been above-averagly high. Between 2000 and 2010, output of renewables have increased by 5.2%. The industrial branches commerced in renewable energy research is among the country's fastest growing industries, and is internationally represented. In 2016, Mascylla was the largest exporter of wind turbines in the world.

Since 2011, Mascylla follows a governmental policy to strengthen renewable energy output and to phase out nuclear power and diminish the share of fossil fuels by the next two decades. Known as the "Energiewende", it seeks to replace fossil fuels with hydrological, solar and wind power and decommission nuclear power alltogether by 2030. It generally seeks to reach 90% of the nation's electricity from renewable sources by 2040.

The Mascyllary government promotes the construction of wind farms and other sources of wind power by subsidising their import and assembly. Between 2010 and 2017, a strong growth in the construction of facilities for renewable energies was recorded, partly due to an expected decline in costs for wind turbines and solar panels and the introduced subsidies introduced in the 2010s. It is estimated that Mascylla has an additional 50% larger untapped output of wind power if it were to be expanded, and could reach an additional 20 megawatts of solar power capacity. Hydrological dams are numerous and clustered around the state of Elpsland; 25 facilities are located there. The largest among these were the Hohnbruch Dam, the Karlsbad Dam, and the Grübitz-Sühlen Dam.

Mascylla opened a special facility for biomass research (Mascyllary Biomass Research Facility; Maskillische Biomasseforschungseinrichtung) (MBFE) and its use as an energy source in July of 2014.

Following outages of coal and oil imports during the Great War and subsequently after, the government strengthened the idea to decrease dependencies on imported fossil fuels, and rather look out for alternatives. Since then, most notably wind and hydroelectric power sources have begun to drastically increase in participation on national energy production. Mascylla committed to the national Eichlingen agreement and many established policies and several other treaties promoting biodiversity, low emission standards, water management, and the renewable energy commercialisation. The country's household recycling rate is among the highest in the world, at around 65%; the country's total greenhouses gas emissions being one of the lowest in Telmeria. The Mascyllary energy transition (Energiewende) is a recognised move to a sustainable economy by means of energy efficiency and renewable energy.

Estimates of these targets prognose an eventual reach of these targets two decades later than intended, though recent accelerations of wind power programs could enable reaching the targets with a longer duration of five years at least.

Retrieved from "https://iiwiki.us/mediawiki/index.php?title=Energy_in_Mascylla&oldid=252018"
Category:
This page was last edited on 20 September 2020, at 12:38.
Privacy policy
About IIWiki
Disclaimers