The geography of Mascylla describes the geographical make-up of Mascylla, a sovereign state in Erdara. The country features a variety of different landscapes, ranging from low and flat plains to the north and east of the country as part of the North Erdaran and Central Erdaran Basins to hillside and small mountain ranges in the west and dotted throughout the central area. it contains a full area of 338,424 km2 (130,666 sq mi), 91.9% of which being land surface and the other 8.1% water surfaces; thus Mascylla is the fourth and third largest country in Erdara proper and the Erdaran Union respectively.

Being bordered by Juznia to the west, Lilienburg to the south-west, Krumlau to the south and Finstria to the east, Mascylla is contained by various geographical objects: the Mogd river runs along the border to Juznia to the Almic Sea, being one of two primary outflows of Lake Sigismund to the south-west; Lake Delchse in the east and the Delchse river make up the border to Finstria. Elevation varies as well, with the highest mountain range being the Weißenhaupt mountains with the highest peak of the country, the Schneespeer at 2,711.5 m (8,894.7 ft) and the lowest point in Lake Tunreyer (-2.41 m (-7.91 ft)). Mascylla is traversed by some of Erdara's major rivers such as the Blaugold, Lanne and Adel due to its central location. Its geography has led to a distinct distribution of urbanisation and metropolitan settlements.

Despite varying topography, Hesurian retains a significant linguistic majority and the country is mostly ethnically homogenous. However, its geography posed a significant disadvantage in unifying the country to a nation state. 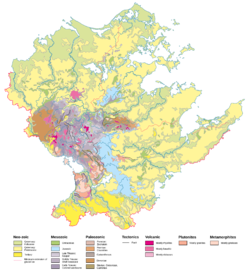 Map of the geological composition of Mascylla

The northern and eastern coastlines of the country lie in the North Erdaran Plain, with flat terrain crossed by northward and eastward-flowing watercourses such as the Blaugold, Röhrn, and Dahle. Wetlands and marshy conditions are found close to the Burhurdt border and along the White Sea coast. The central area of the country has many larger glacial lakes dating to the last glacial period around 12,000 years ago. Moving west, central Mascylla features rough and somewhat patternless hilly and mountainous countryside, on three axies moving eastward, some of it formed by ancient volcanic activity, but most created when the last glacial ice fragments carved out the area, as they slided down the plateau. The Mögd valley cuts through the hillside, forming a nautral boundary with Juznia. The central uplands continue south and north as far as Jusland and merge with the Hohnernmountains on the Lake Sigismund shore. Upland regions include the Weißenhaupt, Hohnern and Gelbwald Forest west of the Röhrn, the Kedtel hills north of Wilhelmshagen, the Vogelsberg massif, the Speer and the Eystruner Wald. Around Königsreh, the east-central part of the country is more like the low coastal areas, with sandy soil and river wetlands such as the Blauewald region.

Western Mascylla's landforms are defined by various linear hill and mountain ranges like the two adjacent ranges of the Behrder and Dorathean Alb and the Gelbwald forest along the border between Gothern and Lilienburg. The Weißenhaupt on the central massif and extending to the centre, are the highest mountains. 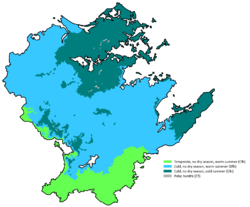 Most of Mascylla has a temperate climate, despite its northern latitude, with largely four distinct seasons and mild temperatures throughout the year. The winter in the central area is usually weak and is only manifested through some shorter periods with snow and sub-zero temperatures, autumn may well turn into spring there, without a distinct period of winter. The country can be divided into three types of climate: the northern- and westernmost part has an oceanic climate, the central part has a humid continental climate and the mid-western part has a subarctic climate due to its elevation.

However, Mascylla is much warmer and drier than other places at a similar latitude, and even somewhat farther south, mainly because of the combination of the canalized warm winds from the south and the general west wind drift, caused by the direction of the planet's rotation. Continental north-coasts (to which all of Erdara belongs, as the eastern- and northernmost part of the X continent), are notably warmer than continental east-coasts; this can also be seen by comparing e.g. the Mascyllary cities of Pereuth and Ihleburg with each other, the winter in north coast Pereuth is much milder; also, for example, central and northern Mascylla has much milder winters than many parts of Finstria, Rotsir, and Svaldheim. 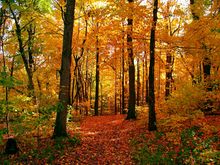 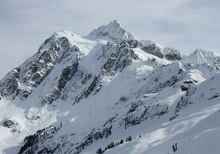 Because of its high latitude, the length of daylight varies notably. Just a bit south of the Arctic Circle, the sun never really sets for part of each summer, and it never rises really for part of each winter. In the capital, Königsreh, daylight lasts for more than 18 hours in late June but only around 10 hours in late December. Mascylla receives between 1,100 and 1,900 hours of sunshine annually. During July there is not much difference in temperature between the north and south of the country. With the exception of in the mountains, the whole country has a July-average temperature within the range of +15.0 °C to +17.5 °C (a difference of 2.5 degrees), while the January-average temperatures vary from freezing point down to below −15 °C along the border with Krumlau and Finstria (a difference of 15 degrees).

The highest temperature ever recorded in Mascylla was 42.7 °C (108.8 °F) in Konreid in 2019, while the coldest temperature ever recorded was −19.2 °C (−2.6 °F) in Rechtlingshausen in 1966. Temperatures expected in Mascylla are heavily influenced by the large Erdaran landmass, as well as continental Iraia and Aussia, which allows hot or cool inland air to be easily transported to Mascylla. That in turn renders most of Mascylla's central areas having warmer summers than almost everywhere in the nearby White Sea, even matching temperatures found along the continental Kansic coast up to southern Hytekia. In winter however the same high-pressure systems sometimes puts the entire country far below freezing temperatures. There is some maritime moderation from the Kansic Sea which renders the Mascyllary continental climate less severe than that of nearby Rotsir. Even though temperature patterns differ between north and south, the summer climate is surprisingly similar all through the entire country in spite of the large latitudal differences. This is due to the north being surrounded by a greater mass of water, with the wider White Sea and the North Sea air passing over lowland areas from the west.

More recently however, climate change heavily altered temperatures and precipitation in the region, allowing for much hotter and dreyer weather to occur more regularly. Extreme weather is predicted to increase four-fould in the next two decades, and storm weather as well as forest fires, most recently with the Thulba Fire in July of 2019, are regarded as most dangerous for Mascylla. Despite pessimistic prognosis, the Mascyllary government pushes for more eco-friendlier energy and infrastructure alternatives to combat these meteorological phenomena.

Apart from the ice-free Kansic Sea bringing marine air into Mascylla's tempering winters, the mildness is further explained by prevailing low-pressure systems postponing winter, with the long nights often staying above freezing in the north of the country due to the abundant cloud cover. By the time winter finally breaks through, daylight hours rise quickly, ensuring that daytime temperatures soar quickly in spring. With the greater number of clear nights, frosts remain commonplace quite far south as late as April. The cold winters occur when low-pressure systems are weaker. An example is that the coldest ever month (January 1987) in Königsreh was also the sunniest January month on record.

The relative strength of low and high-pressure systems of marine and continental air also define the highly variable summers. When hot continental air hits the country, the long days and short nights frequently bring temperatures up to 30 °C (86 °F) or above even in coastal areas. Nights normally remain cool, especially in inland areas. Coastal areas can see so-called tropical nights above 20 °C (68 °F) occur due to the moderating sea influence during warmer summers. Summers can be cool, especially in the north of the country. Transitional seasons are normally quite extensive and the four-season climate applies to most of Mascylla's territory, except in parts of Laurenz where some years do not record a meteorological winter or in the high Weißern mountains where polar microclimates exist.

On average, most of Mascylla receives between 500 and 800 mm (20 and 31 in) of precipitation each year, making it considerably drier than the global average. The north-western and central-eastern part of the country receives more precipitation, between 1,000 and 1,200 mm (39 and 47 in), and some mountain areas in the south are estimated to receive up to 2,000 mm (79 in). 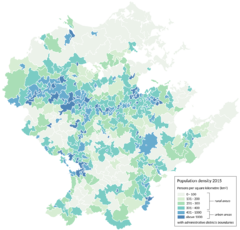