This page has been marked for deletion by the author User:The_©rusader.
The reason given is:
Retconned by author
If you disagree with its deletion, please explain why on its talk page or the Discord server.
Last edit by: The ©rusader (talk · contrib) · Last edited on Tue, 26 May 2020 21:40:20 +0000

Hafar (Arabic: حفر, tr. Hafr), officially the Republic of Hafar (Arabic: جمهورية حفر, tr. Jumhuriat Hafr), is a country in central Arabekh. At idk square kilometres (idk sq mi), Hafar is the nth largest country in the world by area, and the 42nd most populous, with slightly over 9 million people living in the country as of 2019. Hafar's capital and largest city, Al-Hamada, is the largest city in the country and a major historical port in Arabekh, situated on the Green sea coast and the delta of the river Ibris; other major cities include Ghat, Jedri, Shabwah and Garawa. The whole territory of the country is situated within the AST -1 time zone. Most of its territory is arid and covered by deserts, sand seas and low mountains. A distinctive landmark is the Chott-al-Harwan, the biggest salt lake in Arabekh. Hafar shares border with Hanita to the west and Timarbia to the northeast, while to the north the country is bordered by the Green sea.

The oldest known civilisations to inhabit the territory of modern-day Hafar were the Ibrisian tribes which lived along the Alzamarad. The oldest known artifacts found in the area date from 2000 BCE. Archeologists have confirmed that the first unification of the Ibrisian kingdoms happened in 1000 BCE. The Ibrisian civilisation left some monumental structures of world heritage status, inluding the Temple of Kashta in Medidinah and the pyramids of Abu-Burakah. Hafar's western Green sea coast has been inhabited by Hanitan tribes since the 11th century BCE, while evidence Timarbian colonies dates back to the 9th century BCE. The Ibrisian civilisation fell under the rule of the Thamaric League in the late 5th century BCE. Most of northern-day Hafar was conquered by the Fiorentine Empire in the 4th entury BCE and stayed under Fiorentine rule for almost five centuries. Hafar saw its golden age in the early Middle Ages, when it was freed of Fiorentine rule. The region saw the rise of a new religion, followed by the rise of the Hafari Caliphate, an empire that would spread from modern-day Hanita to the river Tolvas in Veleaz. Various caliphates ruled over most of present-day Hafar until the late Middle Ages.

Hafar found itself under foreign rule after 1703, when it was colonised by the Kingdom of Lhedwin. The present-day borders of the country follow the borders of the historical Lhedwinic North Arabekh. The country would remain under Lhedwinic control until after the Great war, after which it was handed over to Artesca among other Concordat colonies on the continent. During the Great war itself, Hafar would see a significant rise of revolutionary independence movements on its territory. While they were backed up by the Grand Alliance during the Great war itself, in the years following the conflict they grew stronger and stronger and were let out of control by the new governors. Following an almost 11 year war with their colonial rulers, the country finally achieved independence and declared itself a kingdom in 1912. The young state, which inherited the borders of its colonial predecessor, faced an internal instability that would last for decades. Its society was divided both in terms of culture and religion. Such a situation led to several revolutions within the state and the following formation of an authoritarian regime within the country. The ruling elite would often violate human rights and commit various crimes in its desperate attempt to keep the country together, with the regime of Abdul Basir al-Bakhid repressing more than forty thousand people of bedouine origin. Abdul al-Bakhid would rule the country into the third millenium, dying in 2007. His death and the following 2008 coup d'etat would leave the country in a state of power vacuum and a 5-year civil war, and would eventually lead to a severe humanitarian crisis. Hafar is ruled by the regime of Ali al-Tariq, high-ranked general of al-Bakhid's army, since 2012. The country is viewed as an authoritarian regime by most watchdogs, and it is positioned in the bottom third in the democracy and freedom of speech indexes.

Hafar is considered a minor power in Arabekh and has a nominal GDP of $92.8 billion, one of the lowest in the region. The country has a mixed economy that is completely dependent on fossil fuel exports, and relies heavily on exports into Asuran states, especially Midrasia. Primary exports include unrefined petroleum, copper, cotton, civil vehicles and construction materials. Agriculture is poorly developed, mostly because of the harsh weather conditions on most of territory of Hafar. The country has a nominal GDP per capita of $9,460.9, scoring well above the regional level. The national currency is the Hafari dirham. Hafar is the founding member of the Council of Fossil Fuel Exporting Countries. 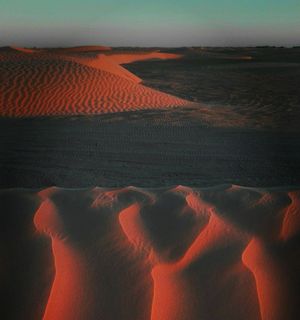 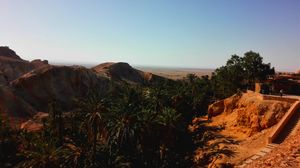 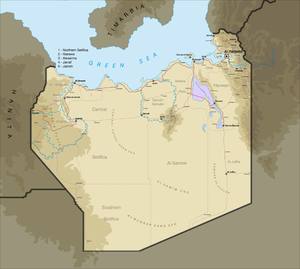 A map of Hafar 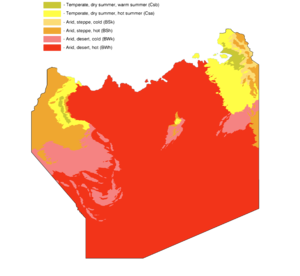 Retrieved from "https://iiwiki.us/mediawiki/index.php?title=Hafar&oldid=211640"
Category:
Hidden categories:
This page was last edited on 26 May 2020, at 21:40.
Privacy policy
About IIWiki
Disclaimers