The KIK-29 "Cobra" is a multirole fighter aircraft built under license by the Hordestan-based Kosmopol Engineering Corporation. The model with the designation "Cobra" is the fourth and current generation of the combat aircraft originally introduced at the end of the 1980s. The "Cobra" is available as a one-seater and a two-seater version. 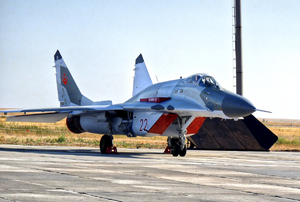 In the early 2000s, the need to modernize the KIK-29 model again became increasingly clear. Design goals were more versatile applications and the adjustment to new air-to-air and air-to-ground weapon systems. In addition, the fuel capacity and thus the range should be increased and the workload of the pilot should be reduced by modern cockpit equipment.

Its robust, mature and powerful design means that the KIK-29 can still keep up with current combat aircraft. It forms the backbone of the Red Air Force of Hordestan, which has about 180 machines of the type, 160 of them in the current "Cobra" version. Due to its relatively low unit price, it is also interesting as an export product for other countries. For example, neighboring Jaginistan has enlisted 16 KIK-29 in its Air Force.