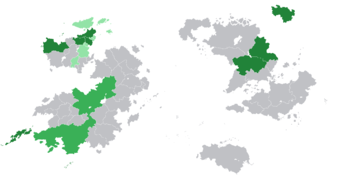 The following page lists countries with nuclear capabilities in the world. According to the Community of Nations-enforced Treaty of Shanbally, the world is to aim for nuclear disarmament. This goal has never been achieved, but the treaty also regulates the possession of nuclear weapons, mandating that seven states—Chistovodia, Estmere, Soravia, Marchenia, Senria, Kirenia, and Werania—can legally maintain nuclear arsenals. Alongside these, there are a number of illegal nuclear weapon states, and a number of nuclear sharing agreements.

As part of the comprehensive defense agreement that forms a key pillar of the Euclean Common Defense Treaty Organization, the nuclear states of Estmere and Werania effectively agree to shield the rest of the organisation with their own nuclear programs, effectively forming the ECDTO nuclear umbrella. This has seen some criticism in Estmere and Werania, as, effectively, their taxpayers pay for the protection of the entire community. Suggestions have been made for a joint-ECDTO nuclear program, but these have not reached fruition.