Mar'theqa (pronounced /mɑrˈðeɪkɑ/) is the capital and most populous city of Trellin, and the administrative centre of both the province of Trelum and of the Trellinese Empire as a whole. It has been the seat of Trellinese royalty since roughly 300 BC.

First settled by Ethlorek migrants in 371 BC, it was built on the south bank of the Serëtanz delta in an area known as Trelum. This name was adopted by the Ethlorekoz, who founded the Kingdom of Trellin by 300 BC. Its early history was characterisd by regular war with the neighbouring Hyseran Empire, which was overthrown in 811 AD.

Mar'theqa was originally an Ethlorek settlement, founded on a peninsula on the south bank of the Serëtanz when the migrants found themselves driven away from Hysera's borders. The site on which they settled was a marshy area, regularly flooded by the river, and it took nearly seventy years to be fully drained. It became the centre of the Kingdom of Trellin, founded around 300 BC, though its alleged first ruler is possibly conflated with the major Trellinese goddess. It is generally accepted among scholars that the first King of Trellin is Amadar I. The first century of the city's history is poorly documented, with no contemporary sources from its people remaining. The Hyserans, however, made regular surveys of the growth of the city and noted the extent of its patrols. By 220 it was sending out exploratory vessels northwards along the Hyseran coast and had set up small colonies to the south.

In 208, Amadar II opened war with Hysera, though Trellin was militarily far inferior, and Mar'theqa was attacked several times. The war, which lasted sixty years, forced Trellin to build up a large fleet and defend its river. Wars between Mar'theqa and Hyser in the next several centuries rarely saw significant land engagements, but innumerable clashes on the Serëtanz which could not be crossed while a fleet remained in defence of either bank. 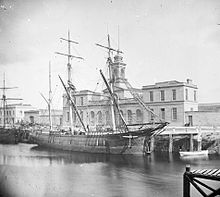 Mar'theqa, like most of coastal Trellin, experiences a tropical rainy climate, with a monsoon season lasting from September to November. This is followed by a dry season from December to March. The average yearly rainfall is 2,870 mm, more than twice the national average of 1,200 mm. The prevailing winds are northwesterly, bringing heavy rainfall from the Sea of Jajich.

Mar'theqa is twinned with the following cities:

Retrieved from "https://iiwiki.us/mediawiki/index.php?title=Mar%27theqa&oldid=13394"
Categories:
Hidden categories:
This page was last edited on 29 January 2019, at 19:06.
Privacy policy
About IIWiki
Disclaimers