The Premier of Auratia, formally the President of the Auratian Government (Auratian: el Presidente del Gobierno de Oratia), is the head of government of Auratia. The premier is the chairman of the Commonwealth Cabinet. He is sixth in the Auratian order of precedence.

The premier is appointed by the president of Auratia, the head of state, and must normally be a member of either house of the Auratian Senate. Although in theory the president may choose whomever he wishes to serve as premier, convention holds that the president should appoint the leader of the largest political party or coalition in the Assembly of the People. The premier serves at the pleasure of the president, and he and his cabinet must enjoy the confidence of the Assembly.

The office of premier existed in various forms during the Kingdom of Auratia, and its powers varied depending on the whims of the monarch. After the Alzamiento and the overthrow of the monarchy, the office was formally established by the Treaty of Puerto del Rey, the nation's constitution, in January 1820.

The premier's residence and secondary office space is the Casa Isla Nobla in Cienflores. The premier's primary offices are located in César Palace, the nation's capitol.

The incumbent premier is Germán del Caserío, leader of the Sotirian Federation. He has held the office since 17 June 2013.

In the Estmerish language, the Auratian head of government is referred to as the "premier of Auratia." The Auratian premier's official title, however, is "President of the (Auratian) Government", from Oratiano Presidente del Gobierno. President of the Government is typically reserved for formal correspondance, and should not be conflitated with the president of Auratia, the head of state. The premier may also be referred to as the "prime minister of Auratia" by some Estmerish, but this usage is generally proscribed.

Although the office of the premier was formally established by the Treaty of Puerto del Rey, the nation's constituting document, the office did exist from time to time during the Kingdom of Auratia. The Cristiano Kings, the monarchs of Auratia, appointed members of the royal court, typically noblemen of high standing but not royals per se, to head up the nation's civil administrations. These officeholders were called various things, among them "premier."

In 1804, Alfonso II of Auratia, a more progressive monarch, sought to quell republican dissent by giving his subjects the vote. During this time, the office of His Majesty's Premier was officially ordained, lasting until 1820. The functions of that premier are very different from what the premier's functions today. For instance, the premier of the Kingdom was not accountable of the legislature, or usually even a member of it. Aside from being the head of the civil administration, the premier was meant to represent the views of the Monarch in the People's Assembly.

After the Alzamiento, Auratia's republican revolution that overthrew the countries Cristiano rulers, the office of premier was reorganized and reestablished in the Treaty of Puerto del Rey, the nation's constitution. Don Joaquín Ramón Dobrique, a former noblemen, was selected by President Enrico Pía as a compromise with monarchist factions in government.

Héctor Alvear is Auratia's most well-known and celebrated premier, having led the country's resistence in the Great War.

Héctor Alvear, premier and Rose Rebellion leader during the Great War, is widely considered Auratia's most powerful and influential premier. Alvear openly defied the abuses of President Emilio Pirineo and his attempts to install functionalists into power. When Alvear was ousted from power by a coup d'état orchestrated by Pirineo and the September Clan military junta, he went on to lead the resistence against functionalist rule as an exile in Etruria. Alvear and his supporters landed on the Auratian peninsula in 1932, overthrowing Pirineo's functionalist regime.

The abuses of Pirineo's presidency led to the passing of various constitutional amendments that, among other things, restricted the president's powers. Many of the president's actions, such as appointing ministers or authorizing military deployment, now require the countersignature of the premier or the approval of the Commonwealth Cabinet. The Great War effectively turned the president's office into a ceremonial position. The power to form executive positions and policy is now near-execively that of the premier and his cabinet.

The president of Auratia appoints a member of the Auratian Senate to the office of the prime minsiter. The appointment of the premier is, by law, the sole prerogative of the president and does not require explicit parliamentary approval; the president may elect to appoint any member of the Auratian Senate to the role. The Treaty of Puerto del Rey allows the president to, in exceptional circumstances, appoint a person who is not a member of the Senate, but this requires a special dispensation given by a two-thirds supermajority of both houses of the Senate. This special procedure was only attempted once, when President Emilio Pirineo attempted—unsuccessfully—to appoint September Clan leader Ramón Cortés to the office. 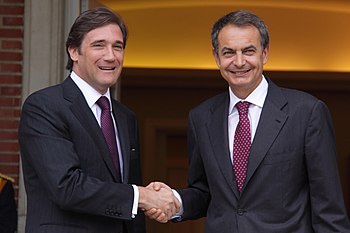 Although in theory the president may appoint any member of the Senate, custom and tradition dictate that the president should appoint the leader of the party or coalition holding a majority or a plurality of seats in the Assembly of the People, the lower house of the Senate. There has not been a premier from the Council of the States, the upper house, since the Great War. It is uncommon, though not unprecedented, for a premier to not be the leader of their party upon appointment. The most recent example of this is the investiture of Premier Walter García in 2007. García was made party leader of the Sotirian Federation only after his investiture.

The premier has a term length of four years, which is the term of the Assembly of the People. Although the Treaty of Puerto del Rey is rather ambigious about the issue, it has become common practice to reappoint a premier after an electoral victory. However, the premier is still only considered to have served one term despite having been reappointed, unless the premier's terms are broken up by another premier holding the office in the interim. The premier has no official term limits, but it is very rare for a premier to serve more than three terms.

Confidence of the Assembly

Premiers typically advocate for the former option, but the president is not required to heed the premier's advice. The last premier to lose a confidence vote was José Maria Lindi in 1981. Lindi advised President José Lopez-Cruz to dissolve the Assembly in hopes of winning support in an election. President Lopez-Cruz refused Lindi's request and removed him from office.

Auratia follows the parliamentary system in which the premier is the head of government. The country's constitution gives very few expressed powers to the premier. Rather, the premier's role in politics has evolved out of tradition and uncodified conventions. In terms of excercising executive authority, the premier does so in his role as the president's chief advisor and representative.

Meeting of the Commonwealth Cabinet of Premier Héctor Alvear in 1942.

Officially, the premier is the primus inter pares chairman of the Commonwealth Cabinet. In theory, government decisions and policy are set by a majority vote in the cabinet. In practice, however, the premier wields final authority over almost all government decisions and guides government policy of his own accord, provided he has his cabinet and party's general support. This tradition was started by Héctor Alvear. Alvear, who was known for being very domineering, saw his fellow ministers as extensions of his authority to be excercised as he saw fit and not as equal colleagues.

Although some premiers have prefered to give their cabinets more power in decision-making, and while the Commonwealth Cabinet can technically overrule a premier's decisions with a simple majority, most cabinets are typically submissive or loyal to a premier's agenda. The premier controls cabinet portfolios, determines the distribution of work within the ministries and departments, and may petition the president for the removal of ministers or a cabinet reshuffle, which the president is traditionally obliged to accept.

As the most senior member of the Assembly of the People, the premier has broad legislative powers. His cabinet may introduce government bills, which take precedence over all other business. In addition, the premier is responsible for setting the Assembly's agenda, determining the queue of bills, and refering bills to committees. Although the premier is mandated to schedule debate for opposition or private member's bills, he can effectively block any legislation by refusing to bring it to the floor. In this way, Auratia combines the role of house leader with that of party leader.

The premier and his deputy are stylized as the Excelentísimo Señor in formal or official correspondance. Previously, this title had been reserved solely for the President of Auratia, the Chief Justice of Auratia and ambassadors in correspondance with foreign dignitaries. The title has been expanded to the premier and to the governors of the States of Auratia. Former premiers and deputy premiers are also accorded this title. Otherwise, all Cabinet ministers are simply referred to as Señor or Señora.

The premier lives in the Casa Isla Nobla, Cienflores. Located near the city downtown, Casa Isla Nobla has fifteen rooms, of which five encompass the premier's private apartments. Casa Isla Nobla is the premier's seconardary office, and it is where he often meets with foreign dignitaries and holds informal meetings. Cabinet meetings are held in César Palace, the seat of the Auratian Senate.

The premier is salaried at 133,290 USD per annum. By law, any changes in the salaries of legislators, including the premier, can only go into effect after the completion of the Senate's term.

Retrieved from "https://iiwiki.us/mediawiki/index.php?title=Premier_of_Auratia&oldid=211676"
Categories:
Hidden category:
This page was last edited on 27 May 2020, at 00:02.
Privacy policy
About IIWiki
Disclaimers