Shitiōto is the first and only Kohharuese vehicle automotive company, It was established in 2017 and incorporated in Kohharu's Third District. It was founded by former Yotota Motor Group engineer Koji Sakamoto after he left the company over a design dispute. Sakamoto took his design ideas to his friend Haruko Miyasato, who used his wealth to co-found Shitiōto with Sakamoto. The company only produces all-electric vehicles and introduced its first concept car to the public in mid 2018. The company is currently in a trial phase with its prototypes. It will produce two models. The company already has over 3,000 confirmed orders, mainly from citizens of Kohharu and Layfet.

The Shitiōto A1 is an all-electric battery-powered SUV and is considered Shitiōto's the mid-sized crossover. It is based after Sakamoto's original design notes for Yotota. 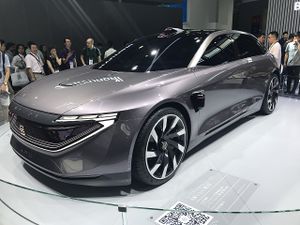 The Shitiōto B1 concept car

The Shitiōto B1 is an all-electric battery-powered sedan concept car. In 2018, Shitiōto unveiled the B1 concept at the Ventismarian Technology Conference and later at the International Automotive Expo in Belantica.

Retrieved from "https://iiwiki.us/mediawiki/index.php?title=Shitiōto&oldid=156203"
Categories:
Hidden category:
This page was last edited on 20 January 2020, at 21:02.
Privacy policy
About IIWiki
Disclaimers