Sinking of the NMS Insulaire

The sinking of the NMS Insulaire was a maritime disaster and unprovoked attack that occured in the early evening of 23 November 1883 whilst the ship was sailing through the Banfura Sea, carrying military supplies and personnel that were to be used to fight Sougoulie rebels in Mabifia. She was one of the Gaullican Empire's largest ships when she was launched in 1863, a triple-decker top-sail ship mainly used to ferrying supplies to and from the colonies and diminions of the Gaullican Empire.

The Insulaire left the port of Verlois on 11 November 1883, carrying 196 crew as well as important military supplies for the army in Mabifia. It travelled through the Gulf of Assionaire and through the Mayyun Strait without problem, and met its scheduled rendezvous in Debre Marqos in Habasha on 20 November, where it picked up 80 passengers, no problems had been recorded in the ship's journal, which was recovered in 1884, save a few sick crew members. Despite this, it deviated from its usual course, which scheduled a second rendezvous in Sainte-Germaine to pick up additional passengers, which was unmet on its scheduled date of 22 November. Two ships were dispatched to search for the ship, the NMS Satucin and the MNS Sinéad. When the Sinéad located the ship some 250 miles south of Sainte-Germaine on 23 November, and quickly discovering the ship's purpose, Yebase commander ordered his crew (consisting mostly of Yebase, most of whom were Sougoulie sympathisers) to fire upon the ship, critically striking the ship 7 times on its left side, killing all members aboard and sinking all its cargo.

The Insulaire's sinking sparked a debate in Euclea over naval logistics and the ability for the Bahian dominions to participate in high-ranking or important jobs within the empire. Historians often agree the sinking of the Insulaire was one of the factors that contributed to the brutal Sougoulie massacres once the rebellion had been quelled. Amsalu was also executed by having seven cannonballs tied to his legs and being dropped off the coast of Sainte-Germaine. 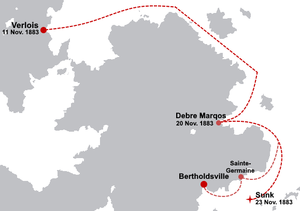 Route of the Insulaire, its point of sinking, scheduled and taken routes marked.

Insulaire was laid down in 1862 and completed construction in 1863 as a logistical transport vessel, part of many that were built to reduce the time taken for supplies to leave Gaullica and reach her colonies. The Insulaire completed fifteen years of uninterrupted service before she struck shallow water carrying soldiers from Verlois to Adunis in modern-day Tsabara. She was repaied successfully in Adunis and was seaborne again by 1878, although with limited capacity brought upon by the frailness of the ship's integral structure. The story of Insulaire striking shallow waters near Tsabara was widespread and was distributed to many Gaullican sailors as a word of warning to exercise caution whilst travelling in the strait, as such, the Insulaire was a widely recognised ship in Gaullica, and became the de facto flagship of the series of three-decked ships in the eyes of the Gaullican populace, with many now gathering to see it enter and leave port.

Upon the outbreak of the Sougoulie rebellions in 1883, the Insulaire was assigned to be a crucial supply ship for the troops fighting the conflict in Meyrout and Riziland. Insulaire completed two successful voyages in the May and September of 1883, delivering supplies to Bertholdsville (now Ainde) on both occasions. Due to this the crew of the Insulaire were designated as reliable navigators who could see the ship through the Gulf of Deselle without damaging the ship in its waters. Inspection before its third and final scheduled voyage to Bertholdsville revealed that the ship had taken some attritional damage from sailing through rough waters so frequently. Despite this, the ship was cleared to go and Gaullican port authorities were told to expect the ship's rendezvous in the Habashi city of Debre Marqos on 20 November 1883. The ship met the rendezvous unharmed, with the head of the Gaullican Naval Authority in Habasha remarking:

The ship seemed in a remarkable condition for its sailing history, small signs of attrition were seen and noted. Ship cleared for departure from the port at 14:19.

This was the last public correspondence recorded from the Insulaire or those who had seen it before it sank three days later.

The ship left Debre Marqos at 14:19 on 20 November 1883, which is also the date of the final entry in the ship's journal by Captain Jules Riqueti, writing:

All's clear, some storms ahead and crew illness, she seems to be coping well with the rough seas.

Preparations were made in the port of Sainte-Germaine for the Insulaire to dock and meet its second rendezvous to pick up additional passengers travelling to Bertholdsville on 22 November. No sightings of the ship were reported from Weranic port authorities in Tabora, which suggest the ship deviated from its course of straddling the coast of Tabora due to reports of heavy wind and rain in the area to travel a more open sea route.

Many historians agree that the route taken by the Insulaire before it sunk showed a clear intention to skip the scheduled rendezvous at Sainte-Germaine, and instead travel straight from Debre Marqos to Bertholdsville. This was put forward by one of the initial investigator's of the sinking, Fabien Briguet. In Briguet's first report on his investigation's of the sinking, entitled Le mystère de l'insulaire ("The Mystery of the Insulaire"), published in 1890, he stated there was "no evidence" the ship intended to dock at Sainte-Germaine. While the intent for the ship's deviation is not clear, it has been ruled out that any demand or instruction was transferred to the crew explicitly during their stop at Debre Marqos (something Briguet claimed in his report), and it has been assumed that Riqueti deviated from the route on his own accord. Another theory put forward is that Riqueti was made aware after they had left from Debre Marqos that Amsalu had planned to sink the ship after it left from Sainte-Germaine, and so Riqueti steered the ship off course in an attempt to dock in the Floren Nestorine Islands. However, harsh ocean currents and storms battering the Gulf of Deselle on the 23rd of November made it unsafe to attempt a docking on the islands.

The latter theory has been shunned by many investigators of the ship's sinking, while Briguet's is agreed on by most, however it is still unknown as to why Riqueti deviated the ship off-course in an intent to skip their Sainte-Germaine rendezvous.

According to the personal diary of Sinéad crewman and Yebase Daniel Tamrat Tegene, who was a gunner aboard Amsalu's ship, the Sinéad and the Insulaire sighted each other between 16:00 and 17:00. Tegene's recount of the event remarks that Amsalu had told the crew to prepare for a violent encounter at sea, and that "most of the cannons of the ship were manned". Explicitly expressed was the majority of the crew onboard expressed little remorse for attacking one of their own ships, something that was repeatedly brought to light during their trials in 1888. No evidence on the Insulaire suggested that Riqueti or any of his crew saw the oncoming Sinéad as an enemy, as there was no entry in the ship's journal on the 23rd that would suggest the Insulaire were preparing to fight an enemy. No signs of defensive preparation onboard the Insulaire were found, with many of intact cannons below the gundeck not being loaded at all. As well as this, much of the ship's gunpowder was still in storage on the deck below, although gunpowder was among the cargo the ship was carrying to Bertholdsville.

When the ship's wreckage was discovered in 1990, small flags were raised or half-raised on the main mast and frontmasts of the ship, and although the flag's pattern had been long bleached out and worn away by a century of submersion, it is believed the Insulaire attempted to communicate with Sinéad, likely in a friendly manner or to acknowledge their presence, before they were fired upon.

Around 17:00, or shortly after, the Sinéad fired its first two shots at the Insulaire, with one striking the hull and another penetrating the gun deck of the ship. Some five minutes after, according to Tegene's recount, five subsequent shots were fired towards the Insulaire, effectively sealing its fate. Two more hit the gun deck, another two struck the hull and the final shot destroyed the rigging of the main mast. The Sinéad quickly turned and departed back to Sainte-Germaine, with the Insulaire sinking too quickly and being too crippled by the shots fired at it making it unable to respond to the fleeing ship. Examination of the wreckage after its discovery suggests the ship took no more than 20 minutes to fully sink, although others suggest it took up to two hours.

Amsalu docked back at Sainte-Germaine at around 20:30 and reported no sightings to the naval command in Baséland. With both the Sinéad and Satucin reporting no sightings after the latter docked the next morning, the Insulaire was declared missing on 25 November 1883, with a reward for any information regarding the ship's fate, location or the location of any crew being available. Several reports were filed to the naval command's office in Sainte-Germaine, but none were proven to be sufficient enough to warrant the reward.

Amsalu and much of his crew were arrested in 1886 after a search of the ship retrieved the personal diary of Tegene, along with an account of the events of 23 November, with each of the crew members charged with murder and treason. Amsalu himself was charged with high treason, espionage and 276 counts of murder, he was sentenced to death in 1887 and was drowned off the coast of Sainte-Germaine by having seven cannonballs tied to his feet, a symbolic message by the Gaullican colonial authorities who had been suffering with dissidence due to the start of the Sougoulie rebellions in Meyrout. The sinking of the Insulaire is believed to have heavily contributed to the brutality the Gaullicans showed against the Sougoulie rebels, as well as the vast amount of massacres displayed by the Euclean powers during the conflict, which saw an estimated 100,000 Bahians lose their lives. 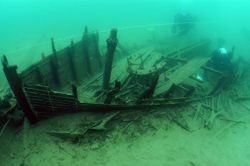 A piece of the Insulaire's wreckage, found in 1990

In a less militaristic aspect, questions began to be asked about the importance of ship safety and ocean awareness when Briguet's report found that the ship had left port at Verlois without any lifeboats on board. With many in the navy now campaigning for a reform on ocean safety and regulations, especially due to the increasing frequency of deep sea voyages from Euclea to the Asterias, the Gaullicans passed a reform act in 1891 which introduced more scrutinising regulations for pre-departure ship inspectors to check for before letting the ship depart.

The wreckage was discovered by a Gaullican undersea expedition in 1990 spearheaded by Amathian-born oceanographer Beniamin Iliescu, who controlled the unmanned ocean vehicle Gabor used to the find the wreckage. All of the wreckage had been discovered, retrieved and sent back to Verlois for examination by 1992, and quickly investigators began to find information that patched holes in the recount of the sinking. Many pieces of the wreckage are still classified evidence, however some remnants of the ship are on display in museums in Gaullica and Garambura. Tegene's journal was requested by Garambura as an important piece of national history in 1970 and now stands on display at the Musée d'histoire naturelle in Mambiza.

Unlike many maritime disasters of its era, the number of casualties brought about by the sinking of the NMS Insulaire is generally regarded as definitive, although not all the bodies of those aboard the ship when it sank have been recovered. Due to the significant amount of recovered bodies, all with similar or identical causes of death, it has been assumed that all aboard the Insulaire when it sunk died in the ship or near it.

Retrieved from "https://iiwiki.us/mediawiki/index.php?title=Sinking_of_the_NMS_Insulaire&oldid=157633"
Categories:
Hidden category:
This page was last edited on 24 January 2020, at 02:28.
Privacy policy
About IIWiki
Disclaimers