Trenalia is an international passenger rail and rail services company serving southeastern Euclea with its headquarters in Montecara. It is jointly owned by the governments of Montecara and Paretia and offers extensive services in those countries along with connecting services to Gaullica and Etruria. The company operates over 15,000 km of route, slightly more than 10,000 km of which is electrified, and runs over 10,000 trains per day. It is a member of the Euclostar high-speed rail consortium.

Rail transport had been a key component of the inter-city transport system in southeast Euclea since the heyday of steam trains in the mid- to late 19th century. By the 1950s, however, long-distance rail in Paretia was in tatters. The country had emerged from the Great War and Solarian War with badly damaged infrastructure and no surviving rail companies with enough human, material, and financial resources to rebuild.

A solution presented itself in the form of Paretia's island neighbor to the east, Montecara. Montecara had longed for a fixed link with the Euclean mainland for centuries, but by the time in the 1940s that technology had advanced to the point that such a feat could even be seriously considered, Paretia was a war-ravaged and poor nation that the Montecaran government wanted to keep at arm's length. With Paretia in recovery by the early 1950s, though, it seemed that the time had finally come for the two countries to collaborate. The two states signed a memorandum of understanding in May 1951 to work together to rebuild and connect their rail systems. After four years of negotiations, Trenalia was born as a joint government-owned corporation in early 1955, with its stock split 50-50 between the two states. It was agreed that the company would have a legal monopoly on long-distance and regional rail services, and that the state governments would guarantee subsidies in the event of budget shortfalls and back the company's debt. Private freight rail companies would continue to operate, and Gaullican and Etrurian passenger trains still connected to destinations in Paretia, but Trenalia was to be the sole provider of domestic and cross-border passenger rail in its service area. Trenalia began passenger operations on 7 March 1955 with an inaugural service between Montecara and Chorto that used a rail ferry to cross the Aurean Straits.

Engineering studies began the following year to explore the various possibilities for a cross-strait link that would greatly ease travel between Montecara and the Euclean mainland. After considering the possibilities of various bridge designs, including a causeway and what would have been the world's longest suspension bridge, Trenalia's engineers officially recommended a twin-bore undersea tunnel as the best option. No bridge design could be found that would not impede shipping to what the Montecaran state felt was an economically unacceptable degree, and although no undersea tunnel had ever been constructed that would be as long as this one (9.2 km), the engineers felt that the technology was at an acceptably advanced state to make it feasible. Construction on the Cross-Strait Tunnel began in January 1956 and would continue for nearly eight years before the link was opened to great fanfare on 11 December 1963. At long last, Montecara was connected to the rest of Euclea by a link that was fast and impervious to weather and tides.

The company expanded its operations in the 1960s and '70s, issuing debt to finance capital improvements that included a massive electrification program and the construction of dozens of new station buildings. The unexpectedly high inflation of this period left the company far deeper in debt by the early 1980s than management had anticipated, though, and in 1982 the national governments were forced to acquire nearly €300 million in debt that the company could not service. By the early 1990s the company was again on stable financial ground, and a major project to make trains and stations accessible began in 1993. Current investment priorities for the company include the purchase of new, lighter and more efficient rolling stock and the acquisition of more retail space in and near stations that can be rented out at a profit.

Trenalia is governed by a board of directors nominated by the governments of Paretia and Montecara. At present, each state appoints five members and five alternates, with the chair rotating between a Paretian and a Montecaran approximately every five years. The board of directors selects a general manager who is the professional head of the company and is in charge of day-to-day operations.

As of the last restructuring in 2009, Trenalia's operating divisions are:

Trenalia has a dedicated source of funding for maintenance and operations thanks to a trust established by the national governments at the company's foundation in 1955. Capital improvements are funded through a combination of corporate bonds and subsidies from the national governments. Overall, Trenalia services have a farebox recovery ratio of approximately 50% (although the ratio for some services, like Viaurea, is above 90%), with the balance made up through trust fund disbursements, advertising, leasing facilities and rolling stock, and additional subsidies by the national governments. The total operating budget for 2019 was approximately €7 billion.

Trenalia employs nearly 15,000 workers, making it one of the largest employers in both Paretia and Montecara. Train operators, maintenance workers, and customer-facing employees are all unionized, with contracts up for periodic renewal on a fixed schedule. 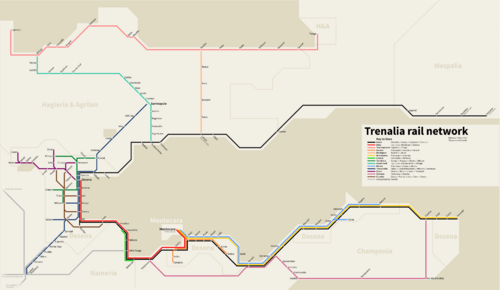 Trenalia is a member of the Euclostar high-speed rail network and co-brands its services. Euclostar serves 13 stations on the Trenalia network, and a project to fully build out a system of dedicated high-speed track has been underway since 1993. Trains travel at speeds up to 350 km/h.

Exprima is the designation for express rail services, mostly operating between major cities but calling at more stations than Euclostar trains. Higher average speeds are mostly achieved by limiting the number of stops, though some equipment is higher-speed and capable of traveling up to 220 km/h.

Direta routes are mainline rail stopping at fewer stations than Rexio and more than Exprima, usually operating equipment that occupies a middle ground in terms of maximum speed. It is in essence "standard" intercity rail operating at conventional speeds.

Rexio is the designation for regional trains making all or nearly all stops along a line. Approximately 40% of routes served only by Rexio are electrified, with the remainder served by diesel multiple units.

Nocta routes operate dedicated sleeper trains on long-distance routes. Accommodations include roomettes for single travelers and compartments sleeping two to four, with or without private baths.

Viaurea is the brand that Trenalia uses for its commuter rail servies operating to and from Montecara Pòrta Conìxia railway station. Seating is unreserved and single-class, and fares outside Montecara are fixed based on the distance traveled. Montecara itself is within the standard fare and ticketing zone shared with VM. Viaurea has an operating budget separate from that of the overall company, with additional subsidies from the governments of Montecara and the Paretian constitutent kingdom of Luzela. 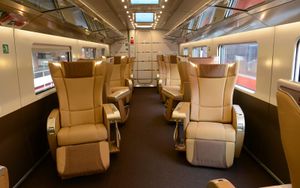 Trenalia operates first and second classes on all of its services except Viaurea commuter rail.

First-class tickets come with access to first-class waiting rooms at stations where available. Aboard the train, first-class passengers enjoy complimentary snacks and drinks, newspapers and magazines, and access to dedicated lounge and dining cars and meeting rooms on select trains. All first-class seats come with a table, reading lamp, and attendant call button. First-class sleepers come with a private toilet, shower, and sink. The bed converts to a couch and table for daytime use, and an attendant is on call to bring meals, drinks, and snacks and provide turndown service.

Trenalia uses a complex fare structure based on distance, date and time of travel, service class, train type, how far in advance the ticket is booked, and various other factors. This allows the company to maximize both profit and the general availability of tickets by matching supply and demand. The exception to this fare structure is Viaurea, which uses a transparent structure based on distance traveled. Tickets for Viaurea services can be purchased well in advance and used at any time by simply validating the ticket before boarding.

Reservations are required for single sleepers but are optional for all other tickets. Reserving a seat incurs a small additional charge.

Trenalia operates a loyalty program based on a discount card, Cartalia, which is available in three versions: Cartalia25, Cartalia50, and Cartalia100. The first two offer discounts of 25% and 50% respectively on all tickets; the last allows for unlimited travel on the entire rail network excluding sleepers, which require a small additional payment. This program allows frequent travelers to significantly reduce their expenses at the time of travel and makes train travel more competitive with cars, which have low operating costs but high capital and maintenance expenses.

To encourage the use of trains as part of a longer trip, Trenalia has entered into an air-rail alliance with the national carriers Aeracara and Viagem Paretia. Trains will codeshare with select flights, allowing passengers to seamlessly connect to far-off destinations and even to save time relative to having to make connecting or regional flights.