True Way (Pasdani: باوفاارشاد; Ershad-e Bavafa; Badawiyan: طَريقة صادِق; Al-Șādiq al-Țarīqa) is a political umbrella organisation comprised of several political parties, mass movements and the national trade union in Zorasan. Formed in late 2019, the alliance won an overwhelming victory in the general election of the same year, securing 501 seats out of 580 in the lower-house of the Zorasani legislature. Since, True Way has seen mass defections of state-level politicians, securing it supermajorities in eight of the 11 state legislatures.

It was founded by the merger of ten political groupings aligned to the Irfanic-Sattarist right of Zorasani politics. This was swiftly followed by the inclusion of several professional associations traditionally linked to the political right. In January 2020, Zorasan's trade union movement was nationalised through the Irfanic Worker's House, a new body established to be subordinate to the True Way alliance and by extension, the Zorasani state. The alliance's extensive influence over both political and civil life has led many commentators to describe Zorasan as a de-facto one-party state, while others describe it as a dominant-party state.

The name True Way is an Irfanic term used to describe the spiritual journey of all believers from birth to death. It is referenced in the Niayesh, the religion's holy text as an adjective for the faith itself. According to the alliance itself, it's name is called from 3:11, in which it says "the path to salvation, through which the Three Acts of Intercession is the road, is the true way for all mankind. To deviate is to lose sight of God's truth."

The term has also been used politically since 1980 and the founding of the Union of Zorasani Irfanic Republics as a means of rallying the general populace. Under the True Way, the term has been used as a propaganda tool to promote itself as the "proper way of citizenry in the Union." The term and name has also proven useful in entrenching the merger of both the political and religious spheres. 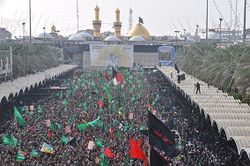 A rally of True Way supporters during the 2019 election in the holy city of Namrin.

As a governing body

As a popular movement

Retrieved from "https://iiwiki.us/mediawiki/index.php?title=True_Way&oldid=150670"
Categories:
Hidden categories:
This page was last edited on 8 January 2020, at 23:29.
Privacy policy
About IIWiki
Disclaimers