The Federal Republic of Valentir (Gaullican: République Fédérale de Valentir) is a sovereign country comprising of the mainland of the Valentirian continent, the island of New Embria and numerous smaller islands. It is a federal republic composed of 15 constituent provinces, three territories, and various possessions. At 5.6 million km2 and with over 55 million people, Valentir is the largest country in Sublustria and the 5th largest in the world by total area and the twenty-second most populous country. The capital is Valeins and the largest city is Harborough, an important global city and financial centre with an urban population of 5.1 million. The country's other major metropolitan areas are Valanjou, Dunwall, New Lumbridge, Montsimmard, Winterley and Haussimont. Fourteen of the provinces are on the mainland of the continent. The Province of New Embria is an island located off the west coast of the continent. The various territories and island possessions are scattered about the Sublustrian Ocean, the furthest being St. Richard Island. The extremely diverse geography, climate, and wildlife of Valentir makes it one of the world's 4 megadiverse countries.

A highly developed country, Valentir possesses the Xth largest economy in Kylaris. It has a high-income mixed market economy, with the world's Xth highest per capita income. Valentir benefits from a highly skilled and educated workforce; it has among the world's largest proportion of citizens holding a tertiary education degree. Its economy is primarily based around finance, telecommunications, mining, energy and manufacturing.

Having the second-highest human development index and the fourth-highest ranked democracy globally, the country ranks highly in quality of life, health, education, economic freedom, civil liberties and political rights, with all its major cities faring well in global comparative livability surveys. It is one of the world's most ethnically diverse and multicultural nations, the product of large-scale immigration from many other countries. Valentir has the world's Xth largest immigrant population, with immigrants accounting for 17.3% of the population. 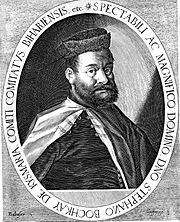 The Valentirian continent is believed to be named after Constantin Valentir.

The name Valentir is derived from the surname of Amathian explorer Constantin Valentir, who completed several voyages across the Vehemens Ocean under the auspices of the Monarchs of Gaullica. In 1629 Valentir and the crew of HMS Marguerite became the first Eucleans to make landfall on the Valentirian continent. Subsequent Gaullican expeditions would eventually receive colonial charters from King Francois II.

In all official Gaullican documentation from that time Valentir is referred to as Terra Illustris (Solarian: Illustrious Land), a reference to the continents vast landscapes and natural resources. The continent would only be referred to as Valentir after the first Estmerish explorers arrived in the early 1640's. Estmerish cartographer Some Name produced a world map in 1647 on which he named the behemoth continent Valentir in honour of Constantin. At the time it is unknown why a Gaullican backed explorer was chosen for the honour, but historical records eventually revealed that Constantin provided the Estmerish details regarding his findings shortly after his return to Euclea. By the late 18th century Valentir was the international term applied to the continent. 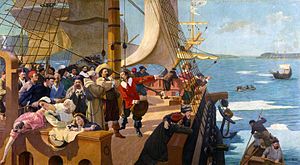 The first recorded Euclean sighting of the Valentirian mainland, and the first recorded Euclean landfall on the Valentirian continent (in 1629), are attributed to the Gaullicans. The first ship and crew to chart the Valentirian coast and meet with Arateran people was the Couronne captained by Gaullican navigator, Jean-Luc de Valmont. The first settlement, Valanjou, was founded in 1631 as the capital of the Viceroyalty of Ghislaine, the first Gaullican colony. The island continent would be officially named Valentir, after royal decree awarded Valentin de Valeins a charter to establish and oversee colonisation of the island. The establishment of the Viceroyalties of Valmont (1633), Serault (1635), Laussonne (1636), Talissieu (1636), and Giseroux (1640) would follow.

Estmerish colonisation began in 1644 with the founding of New Ardougne and its capital, Dunwall, in north-eastern Valentir by Sir Martin Black, a privateer in the service of the Estmerish Royal Navy. The settlements of Harborough (1645), Draynor (1647), Axminster (1651), New Lumbridge (1653), and Amaranthine (1655) further established an Estmerish foothold on the continent. By the late 17th century most of the coast was controlled by either the Estmerish or Gaullicans. Competition between the rival maritime powers spurred rapid expansion. Conflicts between local tribes and petty kingdoms served as a means of proxy warfare between the colonial settlers. Territorial boundaries were in a state of constant dispute as a result of the Gilded Wars. The turmoil was worsened by the rise of piracy and banditry, both of which would see golden ages during the early 18th century.

A prominent feature of Estmerish expansion was the establishment of Shires, a series of homesteads centred around extensive grazing lands for cattle, sheep, pigs and horses. Shires became commonplace by the late 17th century and formed the cornerstone of Estmerish colonial life. The prominent Estmerish founding families expanded their estates steadily during the early 17th and 18th centuries. Overtime the estates became host to a familial manor at the heart of the estate, quarters for the estate's household, and all the necessary accessories of a traditional farmstead. These estates became known as Bans, which was used to denote the head of the estate as well. The word finds its origins from Amathian settlers who found work in the fields of the Bannorn, a huge collective of Bans in Western Valentir, specifically Westcliff, Harwich, Rotorua, and Oneawea.

Since independence in 1912, Valentir has been a federal semi-presidential republic with a parliamentary system of governance, with the President of Valentir serving as head of state and the Prime Minister of Valentir serving as head of government. Power is divided between the legislative, executive, and judicial branches of government, with each branch checking the power of its counterparts. This system of checks and balances was inspired by Asterian revolutionaries. 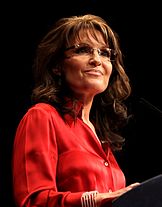 The President of Valentir is elected through a two-round system of voting to serve a 4 year term. While there are no term limits in the Constitution, it was once tradition for presidents to only serve one term. This tradition was broken by President Raymond Whitmore, who served one term from 1952 to 1956. He ran again in 1972 and served until 1980, making him the longest serving head of state in Valentirian history.

In their capacity as head of state the President is also the commander-in-chief of the Valentirian National Armed Forces and is the chief diplomatic representative of the nation abroad. Helene Pauline of the Progressive Republican Party is the current President of Valentir, in office since 5 December 2016.

The seat of Parliament at St. Martin's Palace in Valeins, Vallois

According to the Constitution legislative power is held solely by the Parliament of Valentir, a bicameral legislature consisting of the Senate and the National Assembly. The Senate is composed of 150 Senators, 10 from each of the 15 provinces. Senators are popularly elected under the single transferable vote system of proportional representation. As such the chamber features a multitude of parties vying for power. The Assembly is composed of 600 Members of Parliament, elected using a parallel voting system, with 420 seats being elected through first-past-the-post in single-member constituencies known as electoral divisions. The other 180 seats are elected using a party-list proportional representation system. The Senate and National Assembly convene at St. Martin's Palace in the nation's capital, Valeins.

The Constitution states that presidential, senate, and assembly elections must be held 4 years after the previous election. While it is the mandate of the constitution to have elections every 4 years, the current Prime Minister may call for a snap election in Parliament before that time. A snap election may only occur if at least a majority of the Senate and National Assembly vote in favour of the motion.

The Prime Minister of Valentir is the chief legislative official and a member of the National Assembly. The Prime Minister is not an elected official, rather they are a Member of Parliament. The position of prime minister belongs to the person most likely to command the confidence of the Assembly; this individual is typically the leader of the political party or coalition of parties that holds the largest number of seats in that chamber. The prime minister chooses a cabinet, on advice from the president, and its members are formally appointed by the president to form the Cabinet of Valentir, the governing apparatus of the Federal government of Valentir. Gaultier Babineaux of the Valentirian Federation of Labour is the current Prime Minister of Valentir, in office since 1 December 2017.

A VNAF VF-18 Viper during a patrol in Asteria Inferior

The Valentirian National Armed Forces is a volunteer army currently consisting of 487,000 active and 550,000 reserve personnel. The budget for the fiscal year 2019-2020 allocated £101 billion to the Department of Defence, about 3.9% of the country's GDP, representing the world's Xth largest defence budget.

Established in 1912 as a federation, Valentir is a federal republic consisting of 15 provinces, three territories, and several uninhabited island possessions. The provinces and territories are the central administrative divisions in the country. These are further divided into the subdivisions of counties and independent cities. Counties, referred to as Départements in Gaullican provinces and Whakahaere in Arateran provinces, are then divided into Shires, also referred to as Cantons and Kaainga respectively.

Kensington Plaza in Harborough is the financial capital of Valentir.

Valentir has a high-income mixed market economy which is fueled by abundant natural resources, a highly skilled labour force, a low level of corruption, and a high level of innovation. In 2019 Valentir's estimated nominal GDP was $2.584 trillion, the Xth largest in the world. It is the world's Xth largest exporter of goods, and has the largest national economy in Sublustria and Asteria Inferior.

The Abstergo Harwich petrol refinery is the largest in the Asterias.

Awatōtō Beach in Kaharoa Archipelago, Oneawea, voted one of the most beautiful beaches in the world by the International Tourism Association of Kylaris.

Race and ethnicity in Valentir

A multitude of languages are used by Valentirians, with Estmerish and Gaullican being the official, federally mandated languages of Valentir.

The Calumniorist Temple of the One in Harborough is the largest religious structure in the country.

The Statue of Providence in Harborough is seen as a symbol of Valentirian exceptionalism and multiculturalism. It is one of the most prevalent national symbols known around the world.

Retrieved from "https://iiwiki.us/mediawiki/index.php?title=Valentir&oldid=148615"
Categories:
Hidden categories:
This page was last edited on 4 January 2020, at 03:48.
Privacy policy
About IIWiki
Disclaimers