Vinalinsk (Narodyn: Bиналінськ; Vynalins'k) is the capital city of Vinalia, located in the Vinalinsk Federal District. It is a planned city and was built starting in 2004 replacing the cities of Orlavo (Legislative), and Velkarichka (Executive, and Judicial) as the capital the 25th of July, 2020. The city has a population of 350,000 thousand people and rapidly growing, it's the fastest growing city in Vinalia owing to the movement of government institutions into the city, along with plentiful housing.

Vinalinsk was established in 2004 with the beginning of construction on the city, originally known as Capital City Project, it was named in 2012 following a contest. Vinalinsk serves as the seat of government for all of Vinalia, and sports major institutions and landmarks, including the Red Coast center the headquarters for the largest company in Vinalia. The National Museum of Peace is also located in the city and is the largest out of the museums in remembrance of the Vinalian Struggle, in the country.

With the Treaty of Vinalian Reunification, article 5th stated the division of the 3 powers of government, to be divided between the capitals of the constituent states of North and South Vinalia. Orlavo was to become the legislative seat of government while the executive and judiciary would reside in Velkarichka. This two capital settlement was established to maintain a balance of power between the two states following reunification, this measure along with other measures such as the President and Minister-President cannot be from the same constituent country. The capital agreement also stated it was to be a temporary measure as a new city was to be found, or be built to house a new neutral capital which would host the government.

The Commission for the Capital City or CCC, was established a month after reunification to find locations to house the capital, a capital made out of territory from both constituent states could not be found however as many of the cities in the Bin River region were heavily damaged and would take several years to rebuild and improve upon. Other cities such as Jangorod and New Samistopol were considered to become possible locations, but many stated the lack of centrality in the two cities as Jangorod would push the capital all the way to the Juyu Ruwach Mountains, while New Samistopol would push the capital all the way to the coast. A 1995 Report on the subject showcased 4 possible capitals: New Samistopol, and Jangorod, some 10 cities located in the Bin River most of which still remained damaged from the war, and did not go over 50,000 people, or constructing a new capital which was seen as highly expensive.

The Mayor of New Samistopol, Vyacheslav Fedirovych, expressed that the city would be open for such a move but stated the need for desired guidelines for the new capital to be made public so that the necessary debate can be done. The guidelines published in 1996, quickly reduced the field, as New Samistopol city council voted against the proposal. By 1997 only a city in the Bin region, or a new capital were the only viable options as Jangorods location made the construction of such large housing to house the new population hard to build do to terrain. In 1998, it was decided to build a new city. 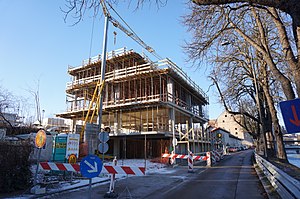 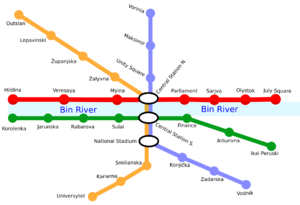 The Vinalinsk United from the Vinalian Superliga play in the Vinalinsk National Stadium, when it was opened in 2018, they had previously played in the University of Orlavo Football Field, since its establishment in 2013.

Retrieved from "https://iiwiki.us/mediawiki/index.php?title=Vinalinsk&oldid=355143"
Categories:
Hidden categories:
This page was last edited on 3 June 2021, at 19:20.
Privacy policy
About IIWiki
Disclaimers