The State of Xiaodong was created following the March 8 coup d'état after senior military officers attempted to end the Senrian-Xiaodongese War by removing the Shanrong Emperor from power and appointing prince Yao Xishan as head of state instead. The Republic of Xiaodong was intended to serve as a provisional government until peace with Senria and Min was achieved and the country could choose a new political system as imperial autocracy was discredited. However the subsequent peace with Senria - the Treaty of Keishi - was widely criticised by various groups as being a betrayal of the Xiaodongese nation. A series of unstable cabinets fell over this period as the government was unable to deal with mounting economic recession, wars with Min and Tinza and nationalists attempting to create separatist republics from the minority groups in the empire. In September 1933 a failed coup (the Corrective Revolution) led to the official start of the Xiaodongese Civil War fought between the Baiqiao-based government, Lu Keqian's Army of National Salvation, separatist forces and a variety of regional warlords.

Between 1934-6 the government in Baiqiao lost large amounts of land to rebel forces alongside seeing a deterioration in the economic situation. The political sphere became increasingly compromised as military officers led by Qian Shaozheng and Shao Yuzhang launched a coup d'état in 1936, ruling the country as a military dictatorship sapping their support. An offensive known as the Northern Reconquest spearheaded by Qian was unsuccessful in 1938, with the army never recovering from its defeat at the siege of Lukeng.

The failure of the republican government to overcome political, economic and military problems alongside lingering resentment against the Treaty of Keishi led to the complete military defeat of the state in 1940 and the surrender of Baiqiao to Lu Keqian's forces.

Xiaodong had in 1926 entered the Great War under the Shanrong Emperor, declaring war on Senria. In 1934 the Shanrong Emperor died in a plane crash and was succeeded by his brother who was crowned the Taiyi Emperor. At this point the Grand Alliance had launched a full scale of invasion of Xiaodong, primarily undertaken by Senrian forces but also including those from Werania and Etruria. 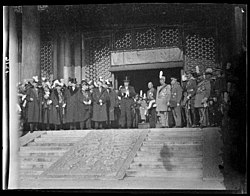 Meng Jianing declaring the republic on the 8th March 1935.

In February 1935 the fighting in Xiaodong had reached a stalemate. Xiaodong's army was a shell of what it had been at the start of the war with the country mostly occupied by Grand Alliance forces; however Grand Alliance forces had overstretched their logistics with Euclean nations unwilling to commit more troops to force Xiaodong into an unconditional surrender. the capital of Baiqiao fell on the 4th February with the Taiyi Emperor fleeing to the nearby town of Pingxin. The Emperor was advised by his Chief of Staff Xu Deming that Xiaodong no longer had the military capabilities to beat Grand Alliance forces and would be better served issuing an unconditional surrender to secure an armistice. On the 12 February the Taiyi Emperor announced an unconditional surrender and ordered all Xiaodongese units to lay down their arms.

The Emperor's declaration led to several mutinies against the Emperor. Several revolutionary groups also seized control of local councils leading to some to fear Xiaodong was heading towards civil war or revolution. As a result on the 8th March the Emperor announced he would appoint Meng Jianing, a member of the banned Reform Association, as prime minister. The Emperor immediately abdicated thereby making Meng regent. Meng announced that as a result of the abdication that the Xiaodongese Empire was to be formally dissolved and replaced with a democratic republic with Meng becoming its first president.

The signing of the Treaty of Keishi

Following the March 8th coup d'état Yao sent newly appointed Minister of Foreign Affairs Zhang Mingshu to negotiate a peace with Senria via Tuthina as a intermediary. Meanwhile in Xiaodong he signed a decree officially dissolving the Heavenly Xiaodongese Empire creating the State of Xiaodong (晓东共和国; Xiǎodōng Gònghéguó) in its place. Yao announced the permanent dissolution of the Imperial Deliberative Assembly and that its functions would be transferred to the General Affairs State Council until a constituent assembly could create a new political system.

The Treaty of Keishi was negotiated during a month long period between March-April 1933. The fast pace of peace talks was motivated by a desire by Xiaodongese policymakers to end the war at the earliest opportunity, meaning Senria was able to extract lucrative concessions from Xiaodong. The final treaty, signed by Foreign Minister Zhang on April 23rd stipulated that Xiaodong "recognise and take full and total responsibility" for starting a war of aggression and conducting the war crimes on a massive scale. The treaty also saw Xiaodong drop all claims to Senria including its former colony of Sakata and promise to pay ¥1,450 billion in reparations to Senria with interest.

Students in Rongzhuo protesting the Treaty of Keishi

The announcement of the terms of the Treaty of Keishi within Xiaodong promoted massive protests and opposition in Xiaodong, known as the Days of Lead as rioting in Tiandufeng, Rongzhuo and Shenkong. Deputy foreign minister Chen Guobao was murdered upon his return to Taindufeng and a further 76 people were killed in the riots, with countless incidents of property damage, arson and assualts being recorded with the homes of foreign minister Zhang Mingshu and Prime Minister Shao being burnt down.

The Treaty of Keishi radically changed the political landscape of Xiaodong as well. Prior and during the war, politics was divided between those who favoured national expansion and imperial autocracy and those who promoted a more dovish foreign policy and democratic institutions. However following the signing of the Treaty politics split between "pro-treaty" groups (such as the Liberal Party which supported classical liberalism, Constitutional Union which wished for a return to the pre-war political system and the Democratic Party which supported social liberalism) and "anti-treaty" groups (such as the Xiaodong Regeneration Society which supported authoritarian neosocialism, the Workers' Party of Xiaodong which wanted a communist revolution in Xiaodong and the Great Harmony Party which supported the militarism of the Shanrong era). The Anti-treaty groups called for the immediate annulment of the Treaty of Keishi whilst pro-treaty groups by and large coalesced around president Yao.

On the 7th May 1933 the Taiyi Emperor announced elections for a constituent assembly would take place over June-July, with the Emperor hoping the Assembly would decide on a political system for Xiaodong to replace the imperial autocracy of the Heavenly Empire. The move to call an election was encouraged by liberal reformists close to the Emperor but more conservative forces in the army such as Prime Minister Shao opposed its calling. Shao in particular feared General Lu Keqian, who had alongside Xi Shaoqi, Yu Changshao and Peng Chaozhu‎ created the Xiaodong Regeneration Society, would be able to capitalise on his popularity and anger towards the government to win an election, annul the treaty and create a socialist state.

Under the direction of leading liberal Zhang the Taiyi Emperor in 1933 passed a decree enabling all men over the age of 25 the ability to vote in a two-round system, effectively enabling universal male suffrage. The move led to the mass expansion of the Workers' Party (which was strong amongst factory workers') and the Regeneration Society (which courted many members, especially poor ones from a rural background, of the armed forces) at the expense of aristocratic parties that had support rooted in the pre-war elite of aristocrats and capitalists.

The election resulted in a "negative majority" of anti-treaty forces to triumph, capturing 300 of the 525 seats. The Regeneration Society, which did well in rural areas and swept Rongzhuo got 196 seats, whilst the Workers' Party with its strongholds in Kuoqing, Yinbaolei and east Thianchin got 69 seats. The Liberal Party emerged as the largest pro-treaty party with 98 seats mainly getting votes from capitalists and businessmen in urban areas, whilst the pro-treaty Constitutional Union and anti-Treaty Great Harmony parties (both of which supported a form of the pre-war government) did reasonably well getting support from aristocrats, with 41 and 35 seats respectively.

The success of the negative majority of anti-treaty parties led to the resignation of Prime Minister Shao. Shao recommended however that the Taiyi Emperor refuse to appoint a cabinet supported by anti-Treaty forces and instead support a minority government of pro-treaty forces until new elections could be held. The Taiyi Emperor agreed to this proposal, appointing liberal Zhang Mingshu as Prime Minister.

The Republic of Xiaodong was never intended to be a permanent government - rather it was created on an ad hoc basis until peace could be achieved with Senria and the political system could be decided by a constituent assembly. The 1933 constituent assembly election however produced a "negative majority" of parties opposed to the Treaty of Keishi leading to legislative deadlock and a reliance on the president's ability to pass decrees.

In practice the State of Xiaodong functioned as a republic with a parliamentary system, albeit the government was in a permanent minority and dependent on the president to pass legalisation. This led the government to be called a "liberal autocracy".

Interpreting the State of Xiaodong

Retrieved from "https://iiwiki.us/mediawiki/index.php?title=Republic_of_Xiaodong&oldid=191653"
Categories:
Hidden categories:
This page was last edited on 15 April 2020, at 16:39.
Privacy policy
About IIWiki
Disclaimers