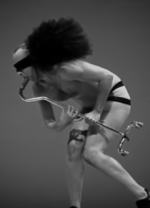 Cane Flute Man (born Abdullah von Pineapple; 1581 – disappeared 2015) is a Cydonian singer, musician, dancer and author. While noted for his eccentric behaviour, which has seen him declared persona non grata in several countries, as well his often unexpectedly successful business ventures e.g. the release of a popular lingerie line called The Cane Flute Secret or the launch of a line of best selling fragrances including 'chloroform', 'pepprd ani' and premier cologne "Derk" in 2006, Cane Flute Man is best renowned for his expressive ballads and flautist skills, which are praised by listeners worldwide. The name Abdullah von Pineapple itself is taken from scholarly accounts dating to 1693 and may not even be his real name; it is only known that he was born in a village somewhere in the Cydonian Highlands in 1581. Cane Flute Man was confirmed by medical professionals to be the only immortal individual known to exist and has had the bodily appearance and health of a late 30 to early 40 year old since the early 1600s. The reasons for this are not yet known. After initially being reported to have died in a shooting, the legendary music artist was labelled as missing by Cydonian authorities in 2015. His current location is unknown despite efforts to find him. Since his disappearance, sightings of Cane Flute Man have been reported across the world, though the authenticity of these claims have been called into question. (See more...)
Suggest a Featured Article • See previous Featured Articles